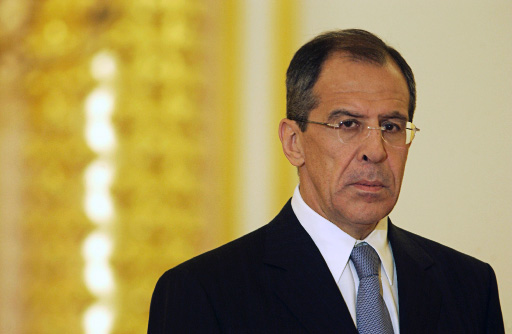 Sergei Lavrov and the blunt logic of Russian power.

In the mid-19th century, Russia was not doing well. It had just been humiliated in the Crimean War, and the other European great powers were busy intriguing about the tsarist empire's frontiers now that the Turks had stopped Russian expansion to the Black Sea. It was in response to these setbacks that Alexander Gorchakov, the prince who served as Russia's foreign minister, issued his famous diplomatic circular. "Russia is not sulking," he proclaimed. "She is composing herself."

By the late 1990s, that must have sounded like a perfect retort to a Russian nationalist whose country was on the ropes. Yevgeny Primakov, a crusty old product of the Soviet diplomatic corps elevated to foreign minister by an increasingly beleaguered President Boris Yeltsin, dusted off the tsarist history books and resurrected Gorchakov as a model for a new Russian diplomacy. He cited him in speeches, wrote a long article extolling Gorchakov's clever realpolitik maneuvers, and even installed his bust in the creaky grandeur of the Foreign Ministry, a Stalinist Gothic skyscraper filled with thousands of underemployed and barely paid bureaucrats still reeling from the Soviet Union's abrupt collapse a few years earlier and the Russian state's quick descent into financial crisis, international debt, and even, on its southern frontier, civil war. So what if we had a few setbacks, Primakov seemed to be saying; Russia can still be a great power. And to prove it: Here's our very own Bismarck.

It wasn't entirely a surprise then, when not quite an hour into my recent audience with the current Russian foreign minister, Sergei Lavrov, the 19th-century prince again made an appearance. I had asked the famously combative Lavrov what had changed in Russia's foreign policy since Vladimir Putin had returned to power in the Kremlin last year. I had in mind the angry recriminations between the United States and Russia once again making front-page headlines, the tit-for-tat new laws banning human rights-violating Russian officials from America -- and American citizens from adopting Russian babies. Or perhaps the tense negotiations over the bloody civil war in Syria, as the United States accused Russia of propping up Bashar al-Assad's murderous regime. Or the angry words exchanged near daily on subjects as diverse as missile defense, gay rights, and the arrest of the Putin-protesting punk band Pussy Riot.

But Lavrov, a diplomat since the Brezhnev era who has spent a lifetime haggling, blustering, scheming, and speechifying on behalf of the battered Russian state ("his religion," one top U.S. official told me), chose to go in a different direction, right back in history to Alexander Gorchakov. He cited the princely foreign minister as an example of the blunt style in Russian politics, as a reason for why Russia has absolutely no intention of following America's lead in the Arab world -- or, by extension, anywhere else. Gorchakov, Lavrov proudly noted, had managed "the restoration of the Russian influence in Europe after the defeat in the Crimean War, and he did it … without moving a gun. He did it exclusively through diplomacy."

When Lavrov did get around to the question at hand, of foreign policy in Putin's Russia, he offered a sharp lecture on how the Kremlin's boss had managed to make Russia great again after the indignities of the 1990s -- and, more to the point, how a great Russia can once again afford to have an "assertive" foreign policy:

As for the changes in the Russian foreign policy, yes, we have more domestic strength, if you wish. We have become stronger economically; we have been successfully resolving the social problems, raising the level of living -- the standards of living -- of the population. Yes, a lot is to be done. But the change is very much noticed. And we feel the change. And Russia feels more assertive -- not aggressive, but assertive. And we have been getting out of the situation where we found ourselves in the early '90s when the Soviet Union disappeared and the Russian Federation became what it is -- you know, with no borders, with no budget, no money, and with huge problems starting with lack of food and so on and so forth. It is a very different country now. And of course we can now pay more attention to looking after our legitimate interests in the areas where we were absent for quite some time after the demise of the Soviet Union.

The areas he mentioned? Africa, Latin America, Asia. In other words, pretty much the entire rest of the world. The message was clear if chilling to those who remember what the assertive foreign policy of the Soviet era looked like: Russia is not sulking, and she is just about done composing herself.