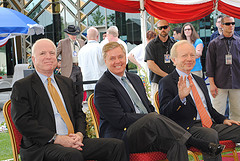 Q: Why couldn't Lindsey Graham find Russia on the map?
A: He'd be too confused looking for the Soviet Union
Neocon prince Lindsey Graham has decided to really hit the Soviets, er, Russians where it hurts. Although he no doubt dreams about bombs -- or at least sanctions -- to bring those stubborn Russians back in line, he has had to set his sights rather lower. In his hyperventilated desperation to punish Russia for not sending NSA leaker Edward Snowden back to face life in the American gulag system (another irony) he wants to go back to 1979 and boycott the Soviet Olympics!
Out of any ammunition or even logic, Graham is all bluster: "At the end of the day, if they grant this guy asylum, it’s a breach of the rule of law as we know it and is a slap in the face to the United States.”
How dare Russia not follow our laws! What a slap in our face!
More ironies drip from the Graham Plan, however, as the original US boycott was meant to embarrass the Soviet Union for its 1979 invasion of Afghanistan. The US of course went on to arm and train the Afghan mujahideen to drive the Soviets out, after which they set up an Islamic state in Afghanistan, hosted Bin Laden and the al Qaeda, were implicitly an accessory thereby to the 9/11 attacks, were then invaded by the US, fought a 12 year war, and finally are poised to take over again as the US desperately seeks to sue for peace while exiting as quickly as possible.
Whew what a whirlwind!
By the way, even John Boehner thinks Graham's plan is stupid.
By Daniel McAdams
http://ronpaulinstitute.org