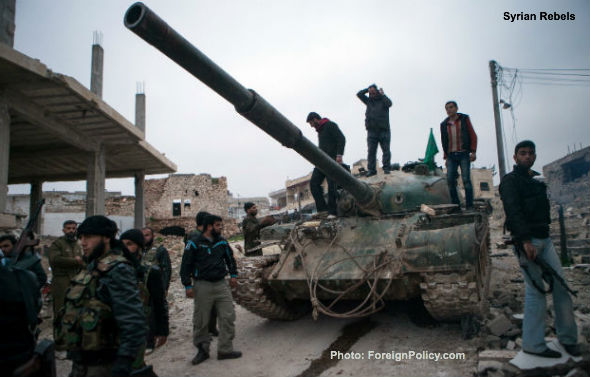 The bitterest fights tend to be civil wars.  Today Syria is going through such a brutal bloodletting.

The administration is preparing to provide arms to Syria’s insurgents.  It’s a mistake.

This kind of messy conflict is precisely the sort in which Washington should avoid.  Despite the end of the Cold War the U.S. armed services have spent much of the last quarter century engaged in combat.  At the very moment Washington should be pursuing a policy of peace, policymakers are preparing to join a civil war in which America’s security is not involved, other nations have much more at stake, many of the "good” guys in fact are bad, and there would be no easy exit.

Military action should not be a matter of choice, just another policy option.  Americans should have something fundamental at stake before their government calls them to arms.

No such interest exists in Syria.

Intervention against Damascus means war.  Some activists imagine that Washington need only wave its hand President Bashar Assad would depart.  However, weapons shipments are not going to oust a regime which has survived two years of combat.  Intervening ineffectively could cost lives and credibility while ensuring heavier future involvement.

There is no serious security rationale for war.  Damascus has not attacked or threatened to attack America or an American ally.  America’s nearby friends, Israel and Turkey, are capable of defending themselves.

Another concern is the conflict spilling over Syria’s borders.  But this does not warrant U.S. intervention.  Maintaining geopolitical stability rarely approaches a vital interest justifying war.

Moreover, intervening would not yield stability.  Washington foolishly attempted to sort out Lebanon’s civil war three decades ago and was forced into an embarrassing retreat.  There’s no reason to believe joining the Syrian killfest today would yield a better result.

Another claim is that ousting the Assad dictatorship, allied with Tehran, would weaken Iran.  Likely so, but then Iran would have a greater incentive to emphasize ties with Shia-dominated Iraq, which also has been aiding Assad.

Moreover, a chaotic, fragmented, sectarian Syria likely would do more to unsettle Iraq, Israel, and Lebanon, allied or friendly to America, than Iran.  Tehran’s divided elite also might close ranks in response to an increased feeling of encirclement.

Advocates of U.S. action point an accusing finger at Iran, Lebanon’s Hezbollah, and Russia for helping Damascus.  However, Qatar and Saudi Arabia are providing money and weapons to the rebels.  Turkey is offering sanctuary for insurgents.  The international nature of the struggle is a good reason for Washington to stay out.

Worse, weakening or overthrowing the Assad regime is more likely to release chemical agents to potentially hostile governments or groups.  Air strikes would loose chemicals against surrounding civilians.  Boots on the ground would mean regime change, leaving Damascus no reason not to use chemical weapons as a last resort defense.

The most pressing concern is humanitarian.  But Syria is not a case of genocide.  There are two forces ready to kill.  Defeating one does not mean peace.  Rather, it means the other gets to rule, perhaps ruinously.

In both Kosovo and Rwanda the U.S.-backed victors committed atrocities.  In Syria reprisals are certain whoever wins.  Neither Afghanistan nor Iraq offer reasons for optimism—extended blood-letting, interminable involvement, disappointing outcome.  The result in Syria actually could be far worse, because of the rise of Islamic radicalism among insurgents.

The final pitch for war is camouflaged as a call for American leadership.  However, whether leader or follower, the U.S. would lose by attacking Assad.  Washington should lead by staying out of the war.

Syria is a tragedy.  There is no reason to make it America’s tragedy.