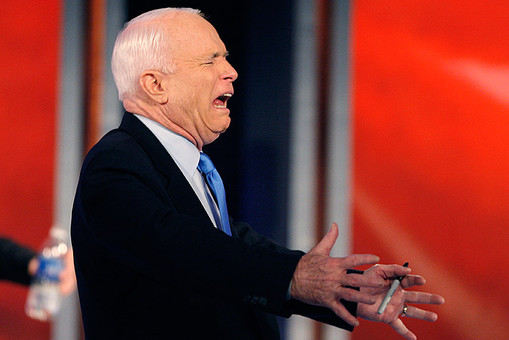 Senate Republican John McCain, one of the most vocal advocates for American military intervention in the crisis in Syria, is firing back after Russian President Vladimir Putin’s op-ed in the New York Times last week, in which the Russian chastised Americans for considering a military strike in Syria and slammed the notion of American exceptionalism.

In an op-ed submitted to the Russian newspaper Pravda, McCain tells the Russian people that Putin "rules for himself, not you." The piece was posted on the paper's website, Pravda.ru, shortly before 10 a.m. Thursday, Moscow time.

He also says that although he has been characterized in the Russian media as "anti-Russian” over the years, he believes he is more pro-Russian than the Putin regime, which he says "misrules” its people.

McCain tells Russian citizens they deserve to live in a society where they can live freely and in accordance with the "inalienable rights” enjoyed by Americans under the Constitution.

McCain also addresses Putin’s alliance with Syrian President BasharAssad, saying Russians deserve a leader who will not fight on the side of a brutal dictator who carried out a chemical weapons attack against his own people. He says Putin’s allegiance to Assad is hurting Russia’s international stature.

"He is not enhancing Russia’s global reputation,” he writes. "He is destroying it. He has made her a friend to tyrants and an enemy to the oppressed, and untrusted by nations that seek to build a safer, more peaceful and prosperous world.”

McCain also says he believes in the Russian people’s ability to create a free and prosperous society that will fight for justice worldwide, without oppressive leaders like Putin to hold them back.

"When I criticize your government, it is not because I am anti-Russian,” he writes. "It is because I believe you deserve a government that believes in you and answers to you. And, I long for the day when you have it.”

The op-ed came after Putin’s own widely discussed op-ed was published in the New York Times earlier this month. In that editorial, Putin slammed the Obama administration’s threat of a military strike in Syria as brutish and called for a diplomatic solution to the crisis.

After the editorial was published, McCain joked on CNN that he’d look forward to having his say on the issue in Pravda.