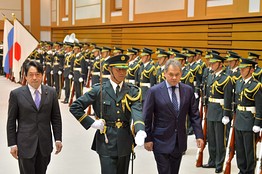 Their foreign and defense ministers met for the first time as the two nations seek to strengthen ties in the face of an increasingly assertive China.

TOKYO—Japan and Russia agreed on Saturday to expand security cooperation, in the latest in a series of contacts between the two nations in the face of an increasingly assertive China.

At the first-ever meeting of two countries' foreign and defense ministers, Russian Foreign Minister Sergei Lavrov and defense chief Sergei Shoigu held two days of talks in Tokyo to launch what are known as "two-plus-two" discussions with their Japanese counterparts, Fumio Kishida and Itsunori Onodera.

The ministers said the new security cooperation, in addition to ongoing economic and human exchange programs, should help foster better relations between the two countries, which have had an often-chilly relationship to a territorial dispute left over from World War II.

The new signs of friendship will also likely send a signal to China, which is beefing up its military presence in the region and is itself involved in an increasingly testy dispute with Japan over a small group of islands in the East China Sea.

"As a seafaring country, maritime security is extremely important for us and today's agreement was made in a very timely fashion," Mr. Kishida said at a joint news conference.

Russia and Japan have conducted joint naval exercises since 1998 but only for the purpose of cooperation in search-and-rescue operations. The Saturday agreement added countermeasures against terrorism and piracy.

They also agreed to periodical mutual visits of defense ministers, along with the launch of a council on cyber-security.

Japan hopes the talks will prompt China to reopen a window for dialogue. Chinese and Japanese leaders haven't met formally since Prime Minister Shinzo Abe took office in December last year, and Chinese patrol vessels regularly enter what Japan considers its territorial waters around the disputed islands, known as the Senkakus in Japan and the Diaoyu in China.

A Japanese government official said Mr. Onodera talked about Japan's recent relationship with China during the meeting, but said there was no comment from the Russian side.

Japan also sought Russian understanding of Japan's security approach as a "proactive contributor to peace," which may include a revision to defense policies to include the right of collective self-defense. China and South Korea have criticized any such moves by Japan, which under present rules can respond only to a direct attack.

"I have explained the increasingly severe security environment around us and improvement in our defense capabilities," Mr. Onodera said.

Mr. Lavrov responded by saying that he understood Japan's aim to become a "proactive contributor" to peace.

Russia and Japan have their own territorial dispute over ownership of four islands off the coast of Hokkaido, which has kept two countries from signing a peace treaty that would formally end World War II.

Mr. Abe and Russian President Vladimir Putin, who have met four times since December, agreed in April to speed up a process toward the peace treaty. Japan wants to seize on the positive atmosphere to make progress on the issue.

"I believe the dialogue started today will raise the level of our ties with Russia and eventually have a favorable impact on the peace treaty talks," Mr. Kishida said.

Ahead of the two-plus-two talks, the foreign ministers held a separate meeting on Friday, at which they agreed to proceed with peace treaty talks as soon as January next year. But it's likely the issue will take years to be resolved, as Russia wants to see greater economic investment from Japan in return.

For Japan, Russia is the third partner for the two-plus-two framework after the U.S. and Australia. Russia has such relationships with the United Kingdom, the U.S., France and Italy. Mr. Lavrov said he invited the Japanese to Moscow for the next two-plus-two meeting, to be held as soon as next year.