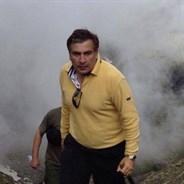 The Washington Post's Deputy Editorial Editor Jackson Diehl, is the last of those who still worship at the altar of Georgia's washed up Rose Revolution and its US-funded architect, former Georgian President Mikheil Saakashvili.
Diehl carries water for the Washington Post's institutional Russophobia and Cold War nostalgia, and like all neoconservatives he loves the idea of revolution. In his mind, former Central and Eastern European countries are to be judged only by the degree to which they have completely severed ties with Russia, which one suspects he still in private refers to as the Soviet Union. Thus, in yesterday's print edition of his latest Washington Post comment he laments "Eurasia's receding revolution." Tellingly, his online editor has named the piece "Georgia's westward course," as the piece is all about his great friend Saakashvili and the dangers of his departure from the scene in Georgia.

In reality, the Saakashvili era was marked by corruption, competing mafias, extreme state violence against political critics, and last but not least the initiation of a near-suicidal war on Russia.

The Rose Revolution was itself the result of a massive influx of US government funding, both directly to Saakashvili and to the myriad of NGOs that did his bidding. The aim was to preserve Georgia as an anti-Russia puppet regime after the then-ruling puppet, Eduard Shevardnadze, started to become a liability to his masters in Washington. Shevardnadze's legendary corruption was getting out of hand and besides, he was getting a bit long in the tooth. It was money well-spent, as, after  Shevardnadze was forced to resign in late 2003, after the "Rose Revolution," by hook or crook the US-educated Saakashvili was "elected" by a Soviet-reminiscent 96 percent of the vote.
Reflecting on the Rose Revolution and its sister Orange Revolution that followed in Ukraine shortly thereafter, Diehl is dejected. "A decade later, the wave [of  "color" revolutions] has receded," he writes in the piece. The problem for Diehl is that Ukraine has just decided against becoming an "Eastern Partner" of the European union in favor of improved trade ties with Russia and Saakashvili has exited the scene in Georgia.
But why have the revolutions receded? Because they were carried out with Washington's financial backing rather than with any real domestic support. They were astroturf. Certainly there were protestors brought in as props in the drama, but it's not hard to get kids to come out and wave flags when free rock concerts and the attendant goodies are proffered in major city squares. Particularly in countries as impoverished as were Georgia and Ukraine.
In Ukraine, the US-backed Orange Revolution brought to power Viktor Yushchenko, the darling of Diehl's neocons in Washington. The election which brought victory to his rival Viktor Yanukovych to presidential power in 2004 was rigged, they claimed. As with Georgia, the mob in the street was said to be sovereign and Yanukovych was forced to back down in favor of Yushchenko.
Years of Yushchenko-led corruption followed, not least carried out by his one-time Orange ally Yulia Timoshenko, whose legendary corruption in the energy sector earned her the distinctly un-princesslike sobriquet "the gas princess." The foul smell of Yulia's corruption was everywhere.

Five years later, when finally given the chance to vote again, Ukrainians returned the same Yanukovych to power who the West said stole the 2004 election. US-favored Yushchenko received just over five percent of the vote.
US intervention in Ukraine -- where, as then-Rep Ron Paul pointed out tens of millions of US dollars was spent to influence the political process -- resulted in resentment toward the US and a return to the status quo ante. The policy has been an abject failure and in fact has likely yielded results opposite of what was intended. 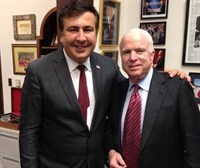 So yes, the US-financed "revolution" has receded.
Saakashvili's mental instability and delusions of grandeur are on full display in Diehl's gushing op-ed. Saakashvili is back in the land of his sponsors, Washington, whining to Diehl that the only thing keeping Georgia on course to Europe -- the country being the only former Soviet republic besides tiny Moldova to take up the EU offer of an "Eastern Partnership" -- is his continue absence from the country!
The "Western martyr" Saakashvili:

The problem with my case is that if I get arrested that is the end of Georgia’s integration with Europe.

Therefore Saakashvili must remain out of the country lest he be charged with corruption on his return like the "Gas Princess" Timoshenko. Even out of office and in disgrace back home, his legendary megalomania is unshaken.
But Saakashvili knows which neoconservative buttons to push. He delivers to Diehl talking points that could have been written at the American Enterprise Institute. Lamenting the decision of most of the post-Soviet republics to look to neighboring Russia for economic ties and trade, he sulks:

It’s not that Russia is so strong. It’s the perception of American weakness and American absence. The perception of Russia now is that no matter what they do in our region, America is not going to respond.

In his own way, Saakashvili admits to his friend Jackson Diehl his corruption and autocracy while in office. He tells Diehl:

He will be back, he promises. But for now he must remain abroad.
"My people need a break from me," he says.
Of that there is no doubt. What next for Saakashvili is uncertain. In a rambling and disjointed post on his personal Facebook page, he claims that he is "discussing several proposals from leading foreign universities regarding the establishment of a new international scientific center tied with my name."
It is tempting to laugh off such a claim, but perhaps there is room for a desk somewhere in the corner of the McCain Institute for John's old friend Mike...
http://ronpaulinstitute.org