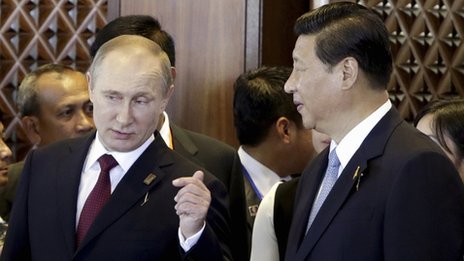 Mr Xi will attend the opening ceremony next month in a show of support for President Vladimir Putin, says China's Foreign Ministry.

US President Barack Obama and his German counterpart Joachim Gauck will not attend the Games. Reports say several world leaders have decided to skip the Sochi Games over Russia's poor human rights record.

But media in China are fully backing Mr Xi's decision to attend the Winter Olympics.

"The first meeting between leaders of China and Russia in 2014 will once again be under international limelight. Against the backdrop of the current international situation, China's new leaders have taken a very significant step in diplomacy, which is something to look forward to," says thePeople's Daily.

"Giving high respect and support to Russia for holding the Winter Olympics, this is the clear and direct message that Chairman Xi is sending to the Russian government and the people," it says.

"Sochi is on the Silk Road Economic Belt, a trade route proposed by President Xi in September last year. Diplomatic activities in the area can help boost economic ties," he notes.

Japan has criticised China for opening the memorial hall in Harbin city, where Ito was shot, reports say.

However, China's Foreign Ministry said "it is not accepting Japan's protest" because it considers Ahn Jung-geun as a "famous anti-Japanese high-minded person".

In a report, the Global Times reiterates that Hirobumi Ito led the invasion of Korea and was "the main culprit behind the Sino-Japanese war that took place in 1894".

But the report stops short of commenting further and instead notes the South Korean media's criticism of Japan over the issue.

Moving on to other news, papers are largely optimistic about the future of China's economy despite a slowdown.

China's gross domestic product (GDP) grew at an annual rate of 7.7% in the October-to-December period, down from 7.8% in the previous quarter.

But it was still higher than the government's target rate of 7.5%.

Ma Jiantang, head of the National Bureau of Statistics, says "the overall national economy still showed stable and moderate growth in 2013 thanks to the new leadership's commitment to reform", the Global Timesreports.

The paper takes note of the problem of manufacturing overcapacity, but adds that "the situation is improving as the central government is stepping up efforts to encourage cost-effective and energy saving production lines, as well as optimising industrial structure".

However, the Southern Metropolis Daily is less positive about the figures and urges more extensive reforms to the investment-led growth model, including reforming the tax and land systems.

"After the construction craze and heavy investments on infrastructure, local government debts crisis is deepening…As the government credit is exhausted and moral risk widened, the whole economy will be dragged into a deep whirlpool by the stubborn investment-led growth model," the paper warns.

And finally, Qin Guogang, vice-president of a Communist Party training school in Shaanxi province, has been sacked from the party and removed from his post, according to the website of the Central Disciplinary Committee.

Mr Qin's removal comes after reports of his alleged affair with a student, the Beijing Youth Daily reports.