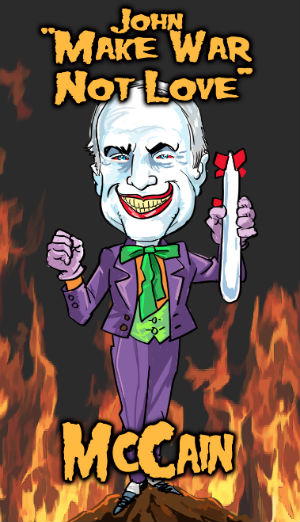 As democratic "people power” protesters have risen-up in Ukraine and Venezuela, apparently toppling Ukraine’s authoritarian government and putting on the ropes the corrupt and failing successor to Venezuelan dictator Hugo Chavez, there has been a steady drumbeat of calls for America to "do something.”

As democratic "people power” protesters have risen-up in Ukraine and Venezuela, apparently toppling Ukraine’s authoritarian government and putting on the ropes the corrupt and failing successor to Venezuelan dictator Hugo Chavez, there has been a steady drumbeat of calls for America to "do something.”

Chief among those calling for America to do "something” has been Senator John McCain.

McCain has been advocating sanctions against the government of Ukraine’s authoritarian President (or is he the now former President?) Viktor Yanukovych. This weekend after the protesters apparently drove Yanukovych from power McCain threw down the gauntlet to Russian President Vladimir Putin as well.

"The message has to be sent to him (Putin) that let the Ukrainian people determine their own future, and a partition of Ukraine ... is totally unacceptable," McCain told the CBS program "Face the Nation"in response to speculation that Ukraine could be partitioned into two countires, one aligned with the European Union, one aligned with Russia, "And we need to act immediately to give them (Ukrainians) the economic assistance that they need, based on reforms that are going to be required, as well. So it's going to be tough sledding," said McCain.

McCain added that Russian President Vladimir Putin should be "nervous” about the Ukrainian revolution underway, adding that he should not be meddling with the country’s future.

Our translation of "tough sledding” is that addressing Ukraine’s great political, economic and cultural challenges will be very expensive for America’s taxpayers.

How exactly the United States is going to replace the economic ties and assistance Ukraine receives from Russia, particularly the natural gas that is the country’s main source of heat and power, does not seem to have occurred to McCain and others who share the "we must do something” point of view about what our policy toward Ukraine should be.

Setting aside the practical problems of physically delivering the actual assistance a democratic government of Ukraine will claim it needs, there is also the not so insignificant problem for us of paying for it.

What McCain is really advocating is borrowing more billions from China to fund an as yet undefined bailout of another failing nation – and putting the notoriously inept and crony-ridden Obama administration in charge of it.

This would be the same Obama administration whose Assistant Secretary of State for European Affairs, Victoria Nuland, said, and we quote, "F--- the EU” while attempting to broker a power sharing deal between the democratic opposition and the now-toppled authoritarian Ukrainian government that would have specifically cut one of the principle opposition leaders out of a position in the shared government.

And Senator McCain wants to put these guys in charge of the rebuilding of Ukraine on the American taxpayers’ dime?

As Senator Rand Paul said during last year’s demonstrations that overthrew the Islamist government in Egypt, America has a terrible record of picking winners and losers in the domestic upheavals of foreign countries.

And to prove Senator Paul’s point, we note for the record that Senator John McCain and President Barack Obama, and his State Department, both backed the Islamist government of now overthrown Egyptian President Mohamed Morsi who is now on trial for various crimes, including leaking information to our Islamist enemy Iran.

Yes, the battle in Ukraine is a battle between authority and democracy and between the culture and values of East and West – and in such battles America should always stand with the West and democracy.

But the spark that ostensibly lit the fire of revolution in Ukraine was economic; the rejection of a trade pact with the EU that would have drawn Ukraine closer to Western Europe and its integrated economic system and concurrently hurting the Russian economy.

To us the situation in Ukraine is beginning to look more and more like an economic battle, with few of the advantages and all of the costs accruing to the United States and its taxpayers. If that is the case, and the European Union does not take the lead in supporting an economically and politically free Ukraine, then what Victoria Nuland’s crude "F--- the EU” really means is that it is the American taxpayers who are about to get screwed.