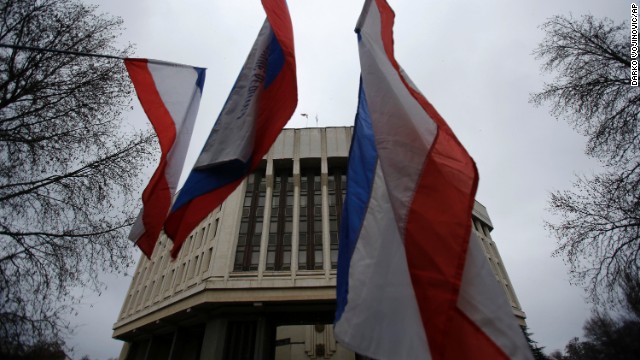 Sixty years ago Sevastopol was part of Russia, and over the last few days this Crimean city perched on the edge of Black Sea has come to epitomise the angry divide between Ukraine's pro-Europe west and pro-Russia south and east.

The Crimean peninsula is the only region in Ukraine with an ethnic Russian majority. Over the weekend of February 22, in a reverse of the Euromaidan protests that have gripped Kyiv and resulted in the ousting of pro-Russian president Viktor Yanukovych, angry locals forced the resignation of the Kyiv-appointed local mayor as a mob of more than 30,000 gathered outside the city council chanting, "Russia, Russia, Russia".

"We are the only city which cannot elect its own mayor, it makes us feel like second-class citizens," Konstantin Valerevich, a protester and the deputy chief of the local militia, complains bitterly. Following the tearful resignation speech of ousted mayor, Vladimir Yatsuba, the council elected a new pro-Russia replacement, Alexei Chalov.

Residents of the city, where most men have a military or naval background, have formed an ad hoc militia that they say will protect the city from unwanted outside intrusions, namely the new interim government established in Kyiv and its western supporters. "Fascists have taken power in Kyiv: if they come to our city, we will fight them with anything we have, if they use weapons, then we will. We saw them throw Molotovs at the Berkut [riot police]," Aleksandar Chrikoff, a 27-year-old protester and biker dressed in leathers tells bne. "They are not going to do that here," he adds angrily.

On February 24-25, crowds continued to gather in the city centre, where a Lenin statue still looms large over the city's promenade and a Russian Orthodox Church stands proudly in the backdrop, although in much smaller numbers. An anti-Euromaidan rally has been announced in the nearby Simferopol for the afternoon of February 26 and is expected to attract large numbers. Rumour has it that pro-Euromaidan protesters, including the Crimea Tartar population who have a longstanding violent dispute with the region's pro-Russian forces, will hold a counter-demonstration – a potential flashpoint for violence.

Previously, there were reports that armed police had set up checkpoints on the major roads into Sevastopol. However, speaking tobneone military official who did not want to be named denied this was untrue. Indeed, no checkpoints were visible. But both the local authorities and police have stated that they will refuse to carry out the "criminal orders" issued by the government in Kyiv. On February 25, Sevastopol's local administration also announced that it would cease making tax payments to authorities in the capital.

Until recently the anti-government protests in Kyiv and western Ukraine had been met with a stony silence in most of Ukraine's pro-Russia south and east. But as violence flared in the capital and the government approached collapse, tensions reached a tipping point. The controversial decision in Kyiv's parliament, the Verkhovna Rada, to repeal a 2012 law giving regional rights to minority languages (including Russian) alongside the miscalculated comments of Sevastopol's former mayor proved to be the straw that broke the camel's proverbial back. "He [Yatsuba] asked Sevastopol to recognise the parliament in Kyiv, that means he supported the coup. Because of this he is criminal and has put shame on the city and should leave, not just his position but this place," says Valerevich.

Aleksei Chaly, the newly appointed mayor of Sevastopol, is an elusive figure. His online biography simply states that he is a businessman and politician. But his refusal to answer questions about whether he is a Ukrainian citizen has fuelled speculation that he holds a Russian passport. Chaly has vowed to defend Sevastopol.

However, while the new appointment has been well received by local residents, a seething anger at the revolutionary events in Kyiv lie just below the surface and locals say that they will not give up their protest until the "bandit" interim government in Kyiv steps down. "Criminals have overthrown the legitimate power in Kyiv. This is our one in a million chance to go back to Russia," says 34-year-old Oksana.

This is a city where the special Berkut police units – accused of being behind some of the worst of the violence that resulted in the deaths of at least 82 anti-government protesters in the capital earlier this month – were welcomed home as heroes. According to the local militia leader Valerevich, on February 25 two "provocateurs" were handed over to the police after they attempted to distribute pro-Euromaidan propaganda in the Sevastopol centre. "They were surrounded by Babushkas [Russian old ladies], who then handed them over to them over to the authorities," he says.

Valerevich concedes it is "unfortunate" that "there cannot be full freedom of speech at the moment, it is very dangerous to go around saying these things at a time when tensions are so high. It could be dangerous for people to say such things, they could be beaten up or hurt, so this has to be considered," he tells bne.

The city is now rife with rumours that the Euromaidan militant group, Pravy Sektor, will head south from Kyiv to provoke violence in the port town. "It has been on the television that armed Euromaidan terrorists are preparing to come down on trains from the West," says Chrikoff, adding that the citizens of Sevastopol say they are ready to fight back if needs be.

Crimea has made threats of secession from the rest of Ukraine for over two decades, and all eyes are now on Russian President Vladimir Putin for a response to the latest dispute. With the winter Olympics in Sochi wrapped up, there is growing fear in the capital and West Ukraine that the Kremlin will now turn its attention to Ukraine in a manner reminiscent of the 2008 aggression against Georgia.

While Olexander Turchynov, Ukraine's interim president, was warning on February 25 that separatism posed a "serious threat" to the country, a visiting Russian parliamentarian to the Crimea said the same day that Moscow would act in the event of heightened tension over the peninsula. "If the life and health of our compatriots is under threat, we will not stand to one side," the parliamentarian, Leonid Slutsky, was quoted as saying after arriving in the regional capital of Simferopol for a one-day visit. Slutsky, who leads the Russian Duma's committee for relations with former Soviet states, declined to say what sort of action Russia might take.

Thus far, the Kremlin's support for the Russian-speaking parts of Ukraine has been restricted to condemning the "barbaric Russophobia" in the west and calling for the West to calm the situation down there, while denying it plans to send Russian troops into Ukraine.

In practical terms, Moscow's intervention in Ukraine's chaotic political furore could be geopolitically costly and a PR disaster. "If Russia sends tanks, it would spark World War III and it would be very bad for Putin politically," says Oleg Litkovchev, holding a placard warning against western Ukrainian interference in Crimea.

And even in the Putin-friendly Crimea Russian military, intervention would not be welcomed in all quarters. Whilst most of those in the crowd agree that Russia is the "motherland," many also make clear that they do not wish to be swallowed up by their eastern neighbour. "We are Russians, but this is not to say that Crimea is part of Russia. We are Russians living in Ukraine," says Litkochev. Others say that Crimea should be an independent state.

Putin may be unlikely to order tanks over the border, but he is not adverse to more underhand tactics. Russian media, which is the primary source of news for many in the southern and eastern regions of Ukraine, shows rolling coverage of the protests amplifying the threat posed by Kyiv. "We will not let down the 7m Russians in Ukraine," ran the scrolling footnote on Russian TV channel playing in the dining room of Sevastopol Hotel.

Importantly, however, being pro-Russian should not be confused with being pro-Yanukovych. The ousted president is thought to have fled to this southern peninsula, and either high tailed it on his personal yacht moored in the Balaclava port, or is camped out in the large Russian military base in Sevastopol.

However, he may find that the Crimean reception is less than warm. Like Putin, many in the region also despise the dispossessed president. "Yanukovych should be prosecuted for his crimes, his assets should be frozen and his wealth seized," says Litkochev.

That puts Litkochev for once on the side of his western compatriots; in Kyiv on February 25, the Ukrainian parliament voted to send Yanukovych to The Hague to be tried over the violence that led to at least 82 deaths.