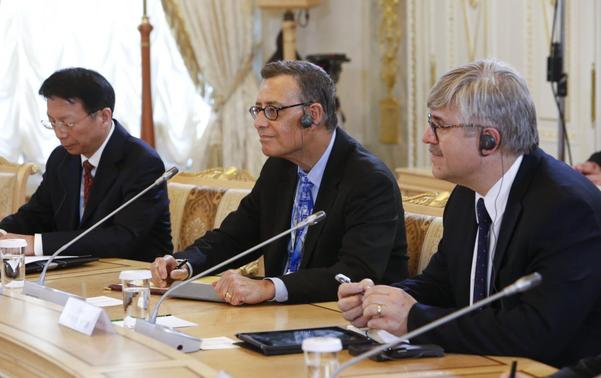 (Reuters) - You can't say Vladimir Putin lacks a pointed sense of humor. The entrée at the Russian president's dinner for news agency editors on Saturday night was "Crimean flounder." No kidding.

As dinner was ending in the ornate Konstantinovsky Palace, Putin was asked whether he speaks regularly with U.S. president Barack Obama.

"We have some contacts," he shrugged. "But now I have to go speak with Mr. (Francois) Hollande and Mrs. (Angela) Merkel," the French president and the German chancellor, respectively.

With that he gave a champagne toast, and left.

But before that he spoke at length on many topics during a three-hour interview before and during a seven-course dinner that included "soft smoked sturgeon salad" and "white asparagus soup with black caviar" as well as the recently Russified flounder.

The topics ranged from the over-arching (Ukraine and the prospect of a new Cold War) to the less well-known (the status of four islands disputed by Japan and Russia, in response to a Japanese editor's query).

The former communist quoted the Bible several times, dismissed suggestions that he wants to recreate the former Soviet Union, and said he doesn't want a new Cold War.

He also declared himself "liberal" on social and sexual mores, but added that people should not be "aggressive" in foisting their values on others.

Speaking in Russian, with simultaneous translation into seven other languages, Putin came across as a clever, articulate man, with a grasp of the intricacies of issues, big and small. But the strongest impression, which emerged time and again, was of Putin's strong sense of aggrievement over the West's relegation of Russia, in his view, to second-tier status. It's bitter. And it's personal.

"I always treat our partners with due respect," he said at one point, "and I hope others treat Russia and me, personally, in the same way." Regarding Obama's denunciation of Russia's annexation of Crimea, Putin snapped: "No one should talk like that to Russia."

At another point during dinner he declared: "If Russia is only allowed to sit next to someone and listen to what others say" at international conclaves, "that is not the rightful role for Russia."

He also decried "rude, forceful action against Russian interests" that might have led to Ukraine joining NATO and deploying missiles within easy range of Russia. He added: "(The West) should have considered the consequences" of encouraging such behavior.

When an Italian editor asked about his reaction to rising nationalism and right-wing radicalism in Western Europe, Putin replied: "I hope you are not blaming us for that!"

The editor hadn't suggested, even indirectly, that Russia was to blame. And the notion that he is trying to re-create the old Soviet Union, Putin declared, was "a tool in the information war" fomented by Western media.

The dinner for journalists culminated the three-day St. Petersburg International Economic Forum, a discussion and networking event, patterned after the annual talkfest in Davos. The forum's aim was to attract foreign investment, which Russia badly needs. Its economy is teetering on recession, and the Ukraine crisis has helped spark what the central bank put at almost $64 billion in net capital flight in the first three months in the year, almost as much as in the whole of last year.

Putin pointed repeatedly to a recent commercial success: his new deal to provide China with $400 billion of natural gas over three decades. But most American chief executives stayed away from the forum, at the urging of the Obama administration. And despite Putin's desire to focus the conference on investment opportunities, the discussion kept returning to Ukraine.

After his speech to the conference's plenary session on Friday, for example, Putin sat for an on-stage interview with CNBC Europe anchor Geoff Cutmore. At one point, when Cutmore kept pressing Putin on Ukraine, the president snapped: "Oh, come on, really. You are a difficult man to deal with!"

During the dinner with journalists he declined to name the national leader, past or present, he admires the most. "There is a saying in the Bible, ‘Thou shall not make a graven image," he explained. "That said, I love history and read it a lot, and I surf the web a lot. I often ask myself what other leaders would do in my situation."

But Putin expansively answered most questions, including one from a German journalist about widespread Russian revulsion at the recent winner of the annual Eurovision song contest: an Austrian bearded male drag artist wearing a dress.

"The Bible talks about the two genders, man and woman, and the main purpose of union between them is to produce children," Putin explained. "For us it is important to reaffirm traditional values.... I personally am very liberal (on matters of personal morality). People have the right to live their lives the way they want. But they should not be aggressive, or put it up for show."

On the sidelines of the economic forum there was lots of talk about moving past politics - as if the Ukraine crisis was akin to an everyday spat between Tories and Liberals, Democrats and Republicans, or Social Democrats and Christian Democrats - and getting on with business. The head of the Russian subsidiary of a major American manufacturer expressed hope that the current East-West crisis would pass within months. And a Russian journalist said he expected that the Russian-American tensions would ease after Obama leaves office.

But asked for evidence to support their views, neither the businessman nor the journalist had much to offer. And the war of rhetoric shows little sign of abating.

Commenting on Britain's Prince Charles, who compared Russia's seizure of Crimea to Hitler's aggression, Putin said: "It reminds me of a proverb: If you are angry, that means you are wrong.... This comparison is not acceptable. It is not what monarchs do."

And at another point, the Russian president observed: "We have a saying: 'You cannot make other people like you'."