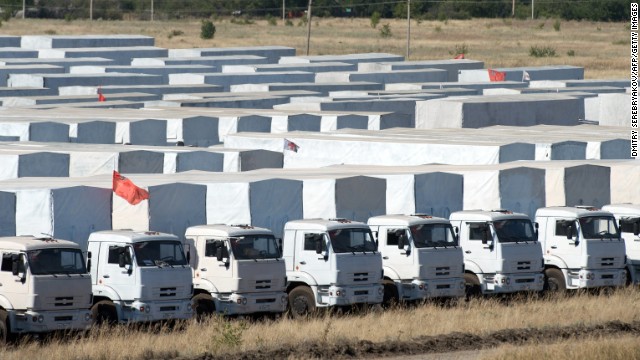 "Our government thinks that the situation in DPR can be described as a humanitarian disaster. Naturally, we want the convoy to visit not only Luhansk, but Donetsk Region cities as well. To that end, we guarantee safety for the drivers of the convoy and ICRC employees,” DPR Deputy Prime Minister Andrei Purgin said.

The prime minister noted that the DPR had already ensured the security of the OSCE mission and international aviation experts on its territory when they arrived in Donetsk to work at the crash site of Malaysia Airlines flight MH17.

"Despite all Kiev’s provocations, despite the fact that Kiev started fighting in the area of the crash, we were able to ensure the security of the experts," Purgin said.

In light of the worsening humanitarian situation in Ukraine's eastern regions Russia made a proposal to the UN Security Council in early August to send an international humanitarian mission to the troubled regions with Russian humanitarian aid under the auspices of the ICRC.

On August 12, 280 trucks carrying about 2,000 tons of humanitarian aid, including 400 tons of grain, 100 tons of sugar, 62 tons of baby food, 54 tons of medication, 12,000 sleeping bags and 69 mobile electrical generators set off from Moscow Region to the conflicted areas in Ukrainian.

On August 17, the first 16 trucks of Russia’s humanitarian aid convoy arrived at a customs checkpoint on the Ukrainian border, with more expected to follow. The head of the ICRC delegation for Russia, Belarus, Moldova and Ukraine, Pascal Cuttat, examined the trucks Sunday and said he was satisfied with their condition, Russia’s Emergencies Ministry stated.

All 280 trucks are now also to be scanned by a special Federal Customs Service detector at the border to determine if they contain any substances besides humanitarian aid.