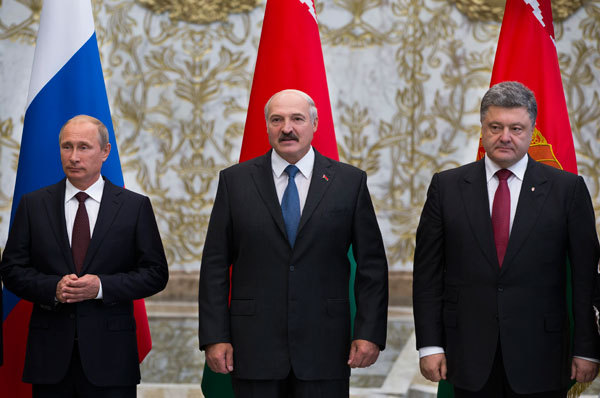 "The two leaders have admitted that the ceasefire is generally observed. Petro Poroshenko and Vladimir Putin discussed the steps to provide sustainable ceasefire," the statement said.

The presidents also stressed the necessity of involving OSCE observers to monitor the ceasefire.

Earlier on Friday, members of the Contact Group on Ukrainian reconciliation met in Belarusian capital Minsk to find ways to the solution of the Ukrainian crisis.

Kiev authorities and self-proclaimed Luhansk and Donetsk People’s Republics signed a deal to declare a ceasefire in eastern Ukraine starting from 15:00 GMT Friday.

Ukrainian President Petro Poroshenko later in the day called on both the Ukrainian Foreign Ministry and the OSCE to provide international monitoring of compliance with the bilateral ceasefire.

The sides also agreed on exchange of prisoners and humanitarian aid.

Russia has been repeatedly urging Kiev to stop the bloodshed and establish a direct dialogue with independence-supporters, sending 280 trucks with humanitarian aid to the war-torn east of Ukraine.