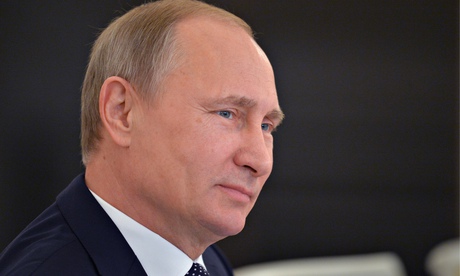 The relentless collapse in the price of oil over the past few months has come as a big shock not only to the Russian economy, but also to its political system. As the price falls from its peak earlier in the year of $115 a barrel to below $50, the government faces some harsh choices. Fifty-two per cent of Russia’s budget revenues are derived from the energy sector. And even though the energy sector comprises only 27% of its total economy, the crisis has deflated much of Russia’s self-confidence, and will in the immediate term force the adoption of some drastic economic measures. In the long term, it may set Russia on a new political path.

The administration is facing a perfect storm of negative economic indicators. In his traditional end-of-year interview on 10 December 2014, Dmitry Medvedev, the prime minister, stressed that Russia had not entirely recovered from the great recession of 2008-09, noting that "negative trends have been adding up in our economy for the past few years” and that "there were signs of crisis in the economy all along”. In addition to falling oil prices and "outside pressure”, the rouble crisis had been provoked by "speculation in the national currency”. He admitted that "the sanctions have cost our economy tens of billions of dollars”.

While the country managed to bounce back from the 9% drop in GDP in 2009, it won’t recover from this crisis so easily. Since 2012 the GDP growth rate has been declining sharply, and in 2014 registered a rise of barely 0.5%, with all forecasts predicting at least a 5% fall this year. A one-point interest rate rise in early December has done little to stop the precipitous decline.

Sanctions and the continued downward momentum of oil prices have inflicted powerful economic damage on Russia. Further government actions halted the slide, notably pumping capital into the banking system and ruling out capital controls. This maintained confidence in the banks and prevented panic withdrawals by depositors. Yet if interest rates were kept at 17% the economy would be ruined. Investment, already low, would fall further.

The oligarch class is deeply opposed to the imposition of capital controls, but the government may well soon be running out of other options. Exchange controls would greatly restrict the options of the business class, who until now have used western banks and various offshore holdings to manage their Russian investments and to limit their exposure to political risks emanating from the Russian regime. Thus capital controls represent a fundamental game-changer for the Putin system.

The so-called policy of "deoffshorisation” and nationalisation of the elites has been at the heart of Putin’s third-term presidency, and it is now accelerated by the sanctions and the economic crisis as a whole. The likelihood of a potential split between Putin and the economic elite is low, yet we know that when a bank run starts, it is almost impossible to stop. Typically, Putin is using the actions of adversaries to advance his own agenda, so far fostering elite consolidation at the top and a mass rallying around the flag more broadly.

The man himself has done his best to not to let it show in personal appearances. In his annual presidential address to the federal assemblyon 4 December 2014, Putin outlined the key challenges facing Russia in his trademark confident manner. In a rather surprising move, he indicated that rather than intensifying state controls, the crisis would force Russia to liberalise and to develop a more dynamic small and medium business sector by removing the deadweight of the bureaucracy. Above all, he suggested that Russia would not turn to the past for models of its future.

The speech was a surprisingly coherent and measured response to the challenges at that time. It refused to accept that Russia was isolated, and it outlined a surprisingly liberal trajectory for Russia’s development – at a time where many in the west were expecting Putin to tighten the screws and isolate itself further. Instead of turning to greater state involvement in investment decisions and a more autarchic model of economic development – something advocated by his nationalist and neo-Soviet critics – there has been a shift towards supporting small and medium entrepreneurs. Already moves have been taken to reduce the regulatory and inspection burden, and to strengthen the rule of law when it comes to defending property rights.

The system, however, is built to sustain inertia, and operates within the framework of balancing the various factions. The crisis may precisely force a breakout from the economic dead end and political stalemate to achieve a meaningful rejuvenation of the polity and the economy. Putin is a master at the unexpected feint and démarche, and as a result of this crisis he may well surprise us yet.

The Putin system has thrived by the pragmatic use of the various materials to hand, and although there is no question of him backing down under western pressure, he is intelligent enough to avoid the trap in which the Soviet system found itself. Delaying reforms too long and upping defence spending in response to the exaggerated western threat drove the Soviet Union into oblivion. Today there are no ideological obstacles to reforms that would meet the expectations of what some have taken to calling the rising middle class. This would mean more competitive elections and a more vibrant and pluralist public sphere. Stranger things have happened.