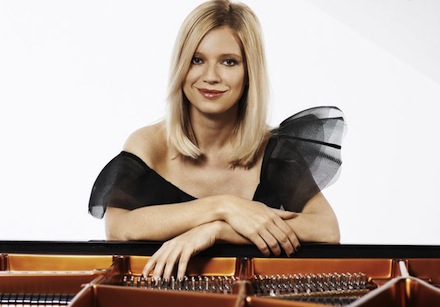 Ukrainian-born, North Carolina-dwelling pianist Valentina Lisitsa is an impressive talent. Most recently she released albums of Rachmaninov Concertos and works by Liszt on Decca Records. She is known for developing a massive following with the savvy use of social media like YouTube. In 2012 she sold out the Royal Albert Hall in an event that was also live-streamed to 100,000 people.

However, it was also on social media that she committed an unpardonable political crime that led the thought police in Canada to cancel an upcoming performance and offer to pay her as if she played if she would just keep her mouth shut about being blacklisted.

What was Lisitsa's crime? As she explained today on Facebook, the Kiev native was not at all happy that a coup government had taken power in her home country and was bombing its citizens in eastern Ukraine. She was particularly incensed about mendacious and one-sided western coverage of the events in Ukraine, so she responded to many of these media outlets forcefully and persuasively. For example, when the French version of Elle magazine ran a photo shoot glorifying female neo-Nazi militia members in Ukraine, Lisitsa sent the magazine evidence of their glamorized young girl's abhorrent ideology.

The magazine did issue a written apology, but in her success Lisitsa made many enemies among those powerful individuals who back the US/UK/Canada enterprise in Ukraine. So they took to a Soviet-style whispering campaign to discredit her. The smear-bund worked among what passes for cultural leaders in Canada. She was axed from performing this week with the Toronto Symphony Orchestra due to what Symphony president Jeff Melanson claimed were "ongoing accusations of deeply offensive language."

As might be expected in such a Soviet-style atmosphere, the pianist was not even afforded the opportunity to face her accusers -- or even to know who they were.

"Someone in the orchestra’s top management, likely after the pressure from a small but aggressive lobby claiming to represent the Ukrainian community, has made a decision that I should not be allowed to play,” she writes, referring to her scheduled TSO performances on Wednesday and Thursday. "I don’t even know who my accusers are, I am kept in the dark about it.”

Pointing out that Elle was glorifying Nazis earned her a Toronto Symphony Orchestra blacklist.

As one of Canada’s most important cultural institutions our priority must remain on being a stage for the world’s great works of music, and not for opinions that some believe to be deeply offensive.

In other words, a musician must primarily be judged not by her talent, but by her adherence to the party line. Politics first.

As the Soviet Communist Party theoretical magazine Kommunist wrote in 1954, the artist must be above all subject to an ideological test:

The artist who deviates from social realism serves interest alien to the proletariat and to his creative effort.