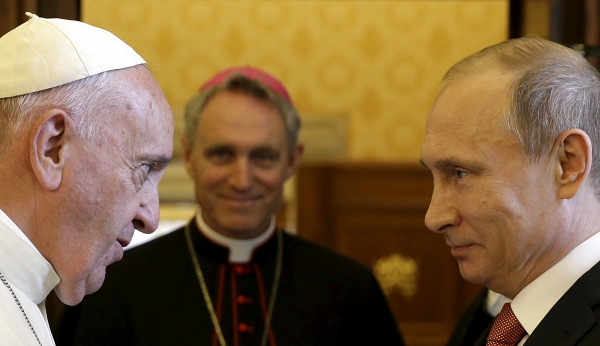 Russian President Vladimir Putin on Wednesday met with Pope Francis at the Vatican. According to the press-secretary of the Russian leader, Dmitry Peskov, the leaders discussed the situation in the world, including the crisis in Ukraine.

"Discussed the current situation in world affairs, of course, mentioned the crisis in Ukraine, spoke about the universal and humanitarian values, which largely unite the Catholic and Orthodox worlds, and all religions," — said Peskov, also noting that both sides expressed concern about the situation with Christians in the Middle East.

"First of all, of course, those situations that pose a threat to the life of Christians in Syria, and continued conflict. Indeed, this is a very dire situation", — quoted "RIA Novosti" the words of Kremlin representative.

In total, the meeting lasted more than an hour. According to Peskov, "the conversation got really deep and thorough".

After the meeting, Pope Francis gave Putin a medal with the image of an angel-peacemaker. Presenting a gift to the Russian President, the pontiff said: "This medal, which was created by the artist of the last century, depicts an angel who brings peace and justice, and solidarity, and protects. As well as this text, in which there is a reflection on the fact that the gospel brings us light and joy, and there are geopolitical thoughts about us and about our life", — TASS quoted the words of the Pope.

In turn, Vladimir Putin presented Pope Francis with a canvas of the temple of Christ the Savior, as well as several volumes of the Orthodox Encyclopedia.