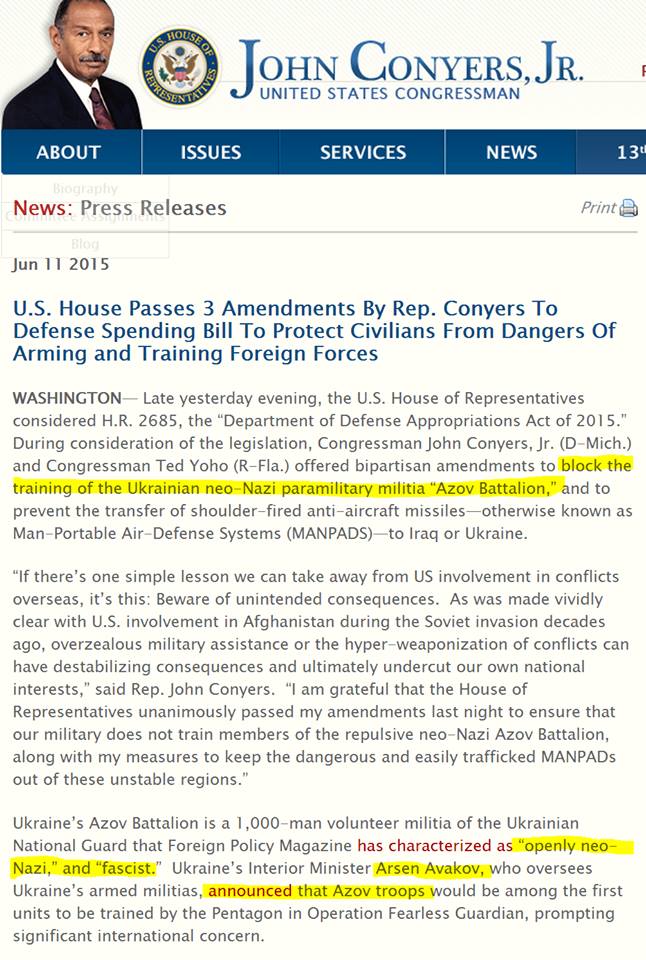 "If there’s one simple lesson we can take away from US involvement in conflicts overseas, it’s this: Beware of unintended consequences. As was made vividly clear with U.S. involvement in Afghanistan during the Soviet invasion decades ago, overzealous military assistance or the hyper-weaponization of conflicts can have destabilizing consequences and ultimately undercut our own national interests,” said Rep. John Conyers. "I am grateful that the House of Representatives unanimously passed my amendments last night to ensure that our military does not train members of the repulsive neo-Nazi Azov Battalion, along with my measures to keep the dangerous and easily trafficked MANPADs out of these unstable regions.”

Ukraine’s Azov Battalion is a 1,000-man volunteer militia of the Ukrainian National Guard that Foreign Policy Magazine has characterized as "openly neo-Nazi,” and "fascist.” Ukraine’s Interior Minister Arsen Avakov, who oversees Ukraine’s armed militias,announced that Azov troops would be among the first units to be trained by the Pentagon in Operation Fearless Guardian, prompting significant international concern.

Since their initial use on a battlefield in 1978, MANPAD attacks have resulted in nearly 1,000 civilian deaths. Added Conyers, "Both U.S. and Israeli officials have feared that these weapons could be used by terrorists to bring down commercial jets. As the boundaries are increasingly blurred between insurgents fighting the Syrian government and those fighting the Iraqi government, providing additional arms could further destabilize the Middle East. The same can be said for Ukraine, where an anti-aircraft missile allegedly downed Flight MH17 last September, killing 298 civilians. The possibility that MANPADS—or any weapon—could fall into the hands of radical groups in Iraq, Syria, or Ukraine, would unquestionably increase the already-devastating human toll in both of these volatile regions.”

According to Reuters, The Azov battalion originated from a paramilitary national socialist group called "Patriot of Ukraine", which propagated slogans of white supremacy, racial purity, the need for authoritarian power and a centralized national economy. Azov’s controversial founder, Andriy Biletsky, organized the neo-Nazi group the Social-National Assembly (SNA) in 2008.

"The Azov men use the neo-Nazi Wolfsangel (Wolf’s Hook) symbol on their banner and members of the battalion are openly white supremacists, or anti-Semites,” wrote The Telegraph. Since Azov was enrolled as a regiment of Ukraine's National Guard in September and started receiving increased supplies of heavy arms, however, Biletsky has toned down his rhetoric, Reuters reported. According to the Washington Post, battalion members "could potentially strike pro-Russian targets on their own — or even turn on the [Ukrainian] government” if it pursues a diplomatic resolution to the conflict.

KR: While you feel like rejoicing that this was a step in the right direction, this could be simply smoke and mirrors, because these facts have become very difficult to hide. Now US lawmakers can sleep soundly with a clear conscious and preach on Fox News and CNN, that they are not arming "the bad Ukrainians". But wait, what about the rest of the Kiev junta???