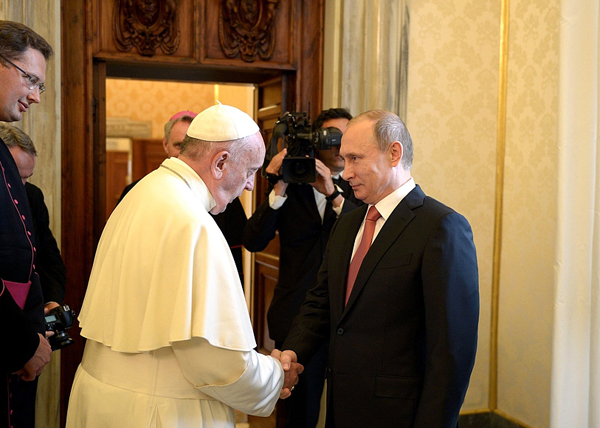 Despite the fact that during the official visit to Italy of the Russian delegation headed by President Vladimir Putin, he held a series of meetings, the main focus even a week before the visit was on the meeting between the Russian leader and Pope Francis. Americans threw a real tantrum, US diplomats tried to convince the pontiff to take a "tougher stance", however the meeting was held in a rather positive light, after which the leaders exchanged symbolic gifts. A medal with the image of an angel-peacemaker received by Putin seriously puzzled the Western elite. What message is directed to the world with this gift and is there a reason to rejoice from such attention – read the opinions of experts collected by Накануне.RU.

About a week ago it became known that during the official visit to Italy, Vladimir Putin will meet with the head of the Catholic Church, Pope Francis. Experts began to speculate about what might be the subject of the meeting, and American diplomats began to publicly declare what, in their opinion, the Pope should say to the Russian President, and in what tone.

"Perhaps now is the opportunity for the Holy See to express concern in a private meeting," - said U.S. Ambassador to the Vatican, Kenneth Hackett, stating that Pope Francis needs to discuss with Putin the "issue of territorial integrity" and take a "tough stance".

"The US has so badly lost a sense of reality, that they are trying to control the Vatican and spiritual authority of the Catholic Church, as they manage one of their puppet states, directing who should meet with whom, and what position to take on various issues," - said writer and public figure Nikolai Starikov to Nakanune.ru.

Anyhow, the meeting took place. Officials did not report the details, but Putin described the meeting as "good", and the press service of the Kremlin described it as a "thorough and friendly conversation", during which a current situation in world affairs, including the crisis in Ukraine was discussed".

"It was about the universal and humanitarian values, which largely unite the Catholic and Orthodox world, and all religions. Both sides expressed concern about the situation of Christians in the Middle East", – stated the message of the Kremlin press service.

After the meeting, Putin presented the Pontiff with a canvas of the temple of Christ the Savior and several volumes of the Orthodox Encyclopedia. Francis did not disappoint and gave Putin an antique medal with the image of an angel.

"This medal, which was created by an artist of the last century, depicts an angel, who brings peace, justice and solidarity, and protects. As well as this text, in which there is a reflection that the gospel brings us light and joy, and there are geopolitical thoughts about us and about our lives," - explained Pope Francis.

Based on the reaction in Western media, the subject of gifts was ignored, Western journalists were more interested that the Pope asked Putin "to make a serious effort" to resolve the Ukrainian crisis. In Russia, on the contrary, the gift of Francis is quite actively discussed – a symbolic gesture hints at the attitude of the Vatican to what is happening in world politics.

"The fact that the Pope gave Putin such a gift, is no accident. On the one hand, it is a hope for peace in Ukraine. On the other hand, no aggressor, no man, who started a war, will never be given such a medal. Obviously, this is pointless, useless and it devalues important human symbols exactly the same, as when the Nobel Peace prize was handed to Obama in advance, who at that time did not do anything important for peace, and after receiving it waged several wars. I think that the most important result of communication of our President with the leader of the Catholics was the demonstration that the Catholic world and the Pope specifically, in no way perceive Russia as the aggressor, do not perceive Russia as a threat to Western civilization, and this symbolic exchange of gifts is addressed not so much to Vladimir Putin but to the representatives of Western elites," - said Starikov.

"This medal is an alliance between the Vatican and Putin, who now symbolizes the Russian Federation, trapped in the ring of enemies, surrounded, fighting and defending against the global liberal world, with some successes and some failures. The Pope is one of the most influential people in the world. Not due to money or armies, not due to the fact that he participates in the UN or any international councils, but due to his authority. He goes out on the balcony, talking in a quiet voice and his word resounds around the world – everyone listens to him, those who hate him and those who love him. I believe that this medal is very valuable in this situation. This is without a doubt and endorsement of Putin's actions from the Vatican, there can not be another interpretation" - offered his view in a conversation with Накануне.RU a journalist, chief editor of the portal "Caucasian Policy," Maxim Shevchenko.

In fact, this symbolic gesture can be perceived as a blessing by the Pope of Putin in the fight against "anti-Christian European elite," say experts.

"The Pope is so disgusted with the liberal-Masonic Europe with its legalization of homosexuality, with active anti-Catholic, anti-Christian and anti-religious positions in the ruling European elite, that he embraced Putin as a son, and actually blessed him, and said: "Fight on, my son, like a soldier of Christ with this godless European elite, which turned Christian Europe into Sodom. I think this is how we should understand it, as the blessing of the head of about one and a half billion people on Earth, who consider him God's representative on Earth, of the Russian President for continuing his deliberate policy against godless anti-Christian European nobility. This is how I interpret the actions of the Pope," - says Shevchenko.

But doesn't it look a little strange on the background, to put it mildly, of a complicated history of relations between Moscow and the Vatican?

"The Jesuits were actively engaged in liquidation of Russian politicians who held positions of conservatism and tradition, sent their killers who physically destroyed kings, princes, poisoned them, participated in conspiracies, it is all active imposition of the Western worldview, which is based on Catholic dogmatism and the desire to destroy any alternative, not in solidarity with Western society," - told Накануне.RU the member of the Public chamber of the Russian Federation, Director of the Center for Geopolitical Expertise, Valery Korovin, noting that "Since the days of the Council of Florence of the XV century, Catholics with their proselytizing attempted to destroy the Eastern civilization and the Russian statehood".

The Seventeenth Ecumenical Council of the Roman Catholic Church was convoked as the Council of Basel (Basle in the once-preferred English spelling) by Pope Martin V shortly before his death in February 1431 and took place in the context of the Hussite wars in Bohemia and the rise of the Ottoman Empire. At stake was the greater conflict between the Conciliar movement and the principle of papal supremacy.The Council entered a second phase after Sigismund's death in 1437. Pope Eugene IV convoked a rival Council of Ferrara on 8 January 1438 and succeeded in drawing the Byzantine ambassadors to Italy. The Council of Basel first suspended him, declared him a heretic, and then in November 1439 elected an antipope, Felix V. The rival Council of Florence (moved to avoid plague in Ferrara) concluded in 1445 after negotiating unions with the various eastern churches. This bridging of the Great Schism proved fleeting, but was a political coup for the papacy. In 1447, Sigismund's successor Frederick III commanded the city of Basel to expel the Council of Basel; the rump council reconvened in Lausanne before dissolving itself in 1449.

He warns Putin and assumes that the gift of Francis may be a "black mark" "with a warning that if he will continue to challenge the interests of Western civilization, he will end up the same as some of the Russian tsars".

However, most experts still believe that the Catholic Church sees Russia as an ally in a number of fundamental ways.

And even the Ukrainian crisis, against the will of Western elites, only brought Russia and the Vatican closer at this point in history, showing that the "international liberal club" doesn't like Russia the same, as it doesn't like the Catholic Church. In addition to Ukraine, another bonding factor became ISIS, which, according to military experts, is supported and financed by the US intelligence services.

"Today we see that the US created in the Middle East and are trying to strengthen the "Islamic state" - a terrorist group, which maintains the most inhumane policies, publicly executing civilian population. Victims of this group are Catholics, Christians. In this sense, the main enemy of the Catholic world, obviously, is not Orthodox Russia, but this terrorist group, which seeks the complete destruction of Christianity in the Middle East, and wherever it appears. In this sense, Russia and the Vatican, of course, can be allies in preventing these inhuman atrocities", – thinks Starikov.

Attempts to manipulate the Vatican from Washington seem childishly naive, because the Catholic Church during its existence, was a witness to the collapse of many great empires, and the US is just another one.

"For the Catholic Church America is a temporary concept. There was some England of Henry VIII, Germany of Luther, Sweden of Gustav Adolf, now there is America. These are just spots on the history of the Catholic Church. Centuries pass, states, mighty empires have come and gone, and the Catholic Church from Peter to Francis lives on. There were Popes, whom Philip the Fair drove to Avignon, and they obediently signed what he dictated to them, and there were Popes who dictated to kings, how they should kneel and grovel. These kings and empires are long gone, and the Church is still here," - reminds Shevchenko.

KR: As they say in Russia, Obama is "nervously smoking on the sidelines." Perhaps the Pope watches RT, or even better, reads Fort Russ?