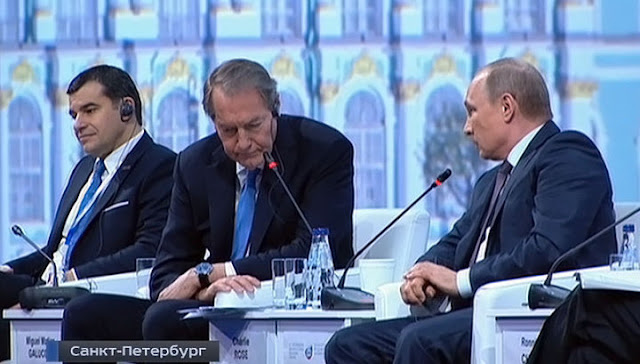 The annual St. Petersburg International Economic Forum (PMEF) which is traditionally considered as the main venue for meeting Russian business partners, concluded on June 20. The culmination of the forum is usually the appearance by the Russian head of state at the plenary meeting and his subsequent participation in a free-wheeling discussion.
During previous years PMEF served as a platform for announcing major international political ideas, but this time Vladimir Putin decided to limit himself to purely economic matters.

Interestingly, Putin did not say the word "reforms", let alone "structural reforms", even once, although that's what he was talking about. Let's focus on only one statistic: the physical volume of non-raw material exports from Russia grew by 17% in the first quarter of this year. Which means the structure of exports are changing, something that until recently could only be dreamt about.

In other areas, Russia's economy also displayed a resilience that many did not expect.

Already in January, Obama rubbed his hands as he was saying that Russia's economy was "torn to shreds", but the reality is such that the budget is stable, inflation is under control, the banking system is stable, there is no jump in unemployment, there are no capital controls, taxes are stable, and the business climate actually improved. "We are absolutely certain that we'll succeed," is how Vladimir Putin ended his report.

One must also mention the scandalous behavior during the panel discussion which was proposed by the US moderator immediately after Vladimir Putin's report. It was the well-known Charlie Rose, a veteran CBS anchor, the winner of the Emmy prize.

Instead of organizing a brainstorm on the economic forum themes, he, as if under hypnosis, was obsessed with Putin to the point of leading a personal interview for more than an hour--about Ukraine, the fears of a new Cold War, the relations with Russia, with Iran, Syria, and Iraq, Germany, Iran, and China.

At first everyone treated it as an example of American directness, but Charlie Rose did not notice the awkwardness. Putin at first delicately tried to remind of the forum's theme but then it's as if he literally felt he was on a tatami mat, and implemented a full anti-illiteracy program by teaching Rose about democracy so skilfully that almost each of his answers was followed by applause.

The effect was sometimes comical. "Our moderator is a genuine American. I say: without external intervention, and he is asking me whether we are prepared to call on President Assad to resign? That's something that only the Syrian people can do, how can we miss something as basic as that?", said the President of Russia.

When it comes to Ukraine, Putin clearly explained the context and the fundamental reasons for what has transpired. "It would seem that some of our partners are laboring under an illusion that a certain world order was established after WW2, with a global power center in the form of USSR, now it no longer exists, there's a vacuum, and it needs to be filled as quickly as possible. I think that's a mistaken approach to the problem. That's how we got Iraq, and we know that even in the US many think that mistakes were made in Iraq. Many have acknowledged them, but nevertheless repeated them in Libya. Then they went after Ukraine. We are not the fundamental cause of the crisis currently unfolding in Ukraine. I said many times that one should not have supported the anti-state, anti-constitutional overthrow and armed seizure of power which in the final account led to the bitter stand-off on Ukraine's territory, a de-facto civil war."

Putin then reminded that Russia strictly adheres to the Minsk Agreements, of which the most important aspect is the direct dialogue between Kiev and Donbass.

Charlie Rose would not calm down, so he received a very blunt answer: the US only has to want peace.

"As you know, the US believes that you are arming separatists, encouraging them, use the Russian military, in order to add fuel to the fire of this conflict. Many are concerned it might cause a new Cold War," Rose said.

"A Cold War will not be caused by local conflicts but by global decisions, for example, the US unilateral abrogation of the Anti-Ballistic Missile treaty. It was a step that pushed everyone toward a new round of rearmament, because it changed the global security system. As to regional conflicts, no matter where they are taking place, the warring parties always find weapons somewhere. That's also the case for eastern regions of Ukraine. If the current situation will be resolved through political means, there will be no need for weapons, but that would require good will and the desire to engage in a direct dialogue, something that we will facilitate. What we can't do, what we will never agree to, is someone, no matter who or where and with whom, negotiating from the position of strength, at first using the police, then the secret services, then the armed forces. Until the military and the so-called "battalions", the armed nationalist formations, appeared on those territories, there were no weapons there. And there wouldn't be any right now, if they tried to resolve the problem through peaceful means. Weapons appeared only after people started being killed by tanks, artillery, rocket launchers, combat aircraft. That's when the resistance appeared. But a soon as someone undertakes an effort to resolve the conflict peacefully, the weapons will disappear," Putin said. "Thanks to all the participants of our discussion, everyone who came to PMEF. Thank you for the friendly tone which you set for today's discussion. In some aspects of our discussion it was sharp, but friendly nonetheless."