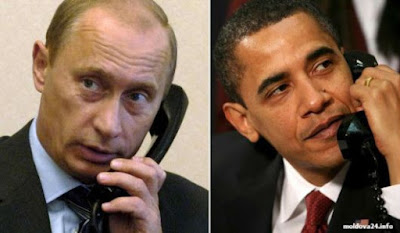 The offices of the President of the United States reported that the Russian leader personally telephoned US President Barack Obama to discuss a number of important issues, including military conflict in Ukraine.

- translated and compiled by Joaquin Flores

It is noted that Obama once again called on Russia to withdraw all the mythical "troops" from the territory of Donbass.

"President Obama reaffirmed the need for Russia to fulfill its obligations under the Minsk Agreement, including the withdrawal of all Russian troops and equipment from the territory of Ukraine", - says the official announcement from the White House.

In addition, the two sides also discussed the situation around the acute problem of the "Islamic state", as well as the progress of negotiations in the P5 + 1 to achieve a comprehensive nuclear deal with Iran. In particular, avoid this in principle.

We stress that the Russian authorities have repeatedly said that Russia is not a party to the conflict and the internal Ukrainian privy to the events in the Donbass this country. The Russian side has always focuses on the fact that is only interested in peaceful resolution of the economic and political crisis in Ukraine.

The Presidents agreed that US Assistant Secretary of State Victoria Nuland and Russian Deputy Foreign Minister Grigory Karasin will be in contact to discuss implementation of these agreements.

Significant attention was given during the discussion to a set of issues pertaining to fighting terrorism, particularly the spread of influence by the "Islamic State” group in the Middle East. Vladimir Putin and Barack Obama agreed to instruct Russian Foreign Minister Sergei Lavrov and US Secretary of State John Kerry to hold a meeting to discuss this issue.

They also engaged in a detailed exchange of opinions concerning the situation in Syria and touched on settling the issue of the Iranian nuclear programme.