Lev Alburt will celebrate his 70th birthday in August. His life was divided in two: the first half passed in the Soviet Union, the second is going on in the USA. In his first homeland, the Odessian GM achieved many successes: he was 3-time Ukrainian Champion, a winner and a prize-winner of numerous international competitions, a repeated participant of the USSR Championship finals which were by then strongest tournaments in the world. In 1979, Alburt, as the saying went, "chose freedom", deciding not to come back from abroad. He has settled down in New York city and has been living there from then on. As Alburt moved to the USA, he became one of the top American GMs, winning the U.S. Championship three times and representing his country many times at the Olympiads. He is still into chess, being not only a successful coach but also a prolific writer. He is the author of many chess books on various topics, which are being sold in prestigious American and European book shops and could occupy nearly a bookshelf if taken together. Apart from that, he has devoted a lot of his time to fighting Soviet communism. He spent his first-earned US money on a trip to Washington D.C. for the Sakharov Hearings. Whenever he got a chance, he provided his chess colleagues coming to the West with anti-Soviet literature. He participated in different rallies and forums, knew Bukowski and Amalrik, was in correspondence with Solzhenitsyn. He was also a member of organizations that made no secret of their intentions to change the Soviet regime. Dramatic acceleration of events in his former country resulting in its collapse was quite unexpected for Alburt, as well as for many others. These days, 25 years after that sharp turn of history, Lev Alburt is still interested in the world political situation. The fate of his former country still worries him, as well as, of course, the fate of his new homeland. We are presenting the GM's point of view on the matters still very important to him. 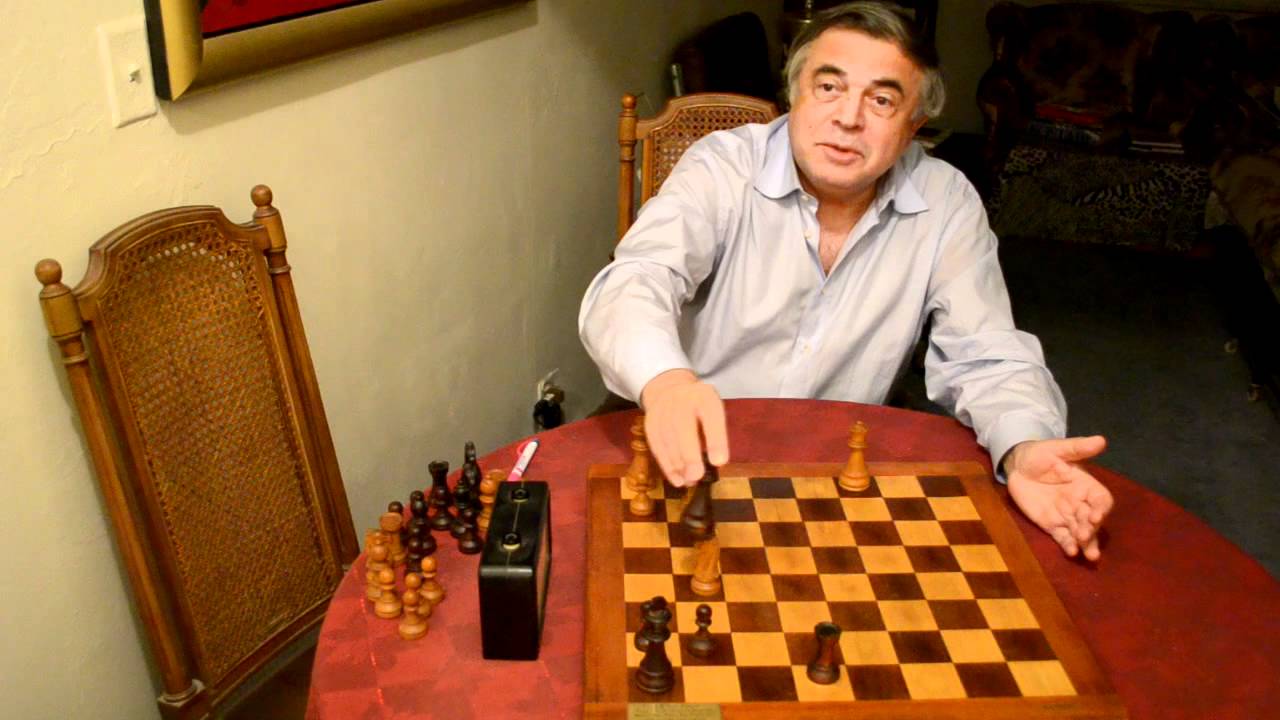 American elites are united in their disdain for Russia and their hatred for Russia’s President Vladimir Putin. Such unanimity is highly unusual; for instance, when President Carter imposed on the USSR the grain embargo, that action was sharply criticized from both left and right.

All three statements are true; but, being incomplete, all three are also highly misleading.

Both Sobchak and Putin firmly opposed the August 19-21 1991 Back-to-Communism Coup, throwing their full support behind Boris Yeltsin. On August 20, Putin demonstratively resigned from the KGB Reserves. Putin’s defiant actions could have cost him dearly, especially as KGB head Kriuchkov was the key leader of the Coup.

In 1996 Sobchak lost the mayoralty to his former aide, Vladimir Yakovlev. Putin, for whom loyalty to friends is a sacred virtue, was outraged. Rejecting Yakovlev’s offer to stay, Putin preferred to leave Leningrad; in a few months’ he’d gotten a middle-level job in the Yeltsin administration. When Sobchak was indicted a year later, Putin smuggled his fallen friend out of the country.

(Commemorating in the spring of 2015 the Armenian genocide, Putin used that forbidden word, genocide – knowing full well this would anger the Turks, with whom Putin had just signed a number of important agreements. Putin did what he thought was right, even at the price.)

As President, Putin brought some normalcy and hope to the embittered, long-suffering nation. He continued to promote the free-market economy, eventually even introducing the 13% flat income tax. State revenues grew and the economy boomed (high oil prices were a big help, of course).

Russo-American Drama: The spurned love and the persistent suitor

Despite all-pervasive communist propaganda, the people of Russia/USSR have always liked the West and considered themselves an integral part of the West. America, they loved. After all, Russians and Americans are much alike in character, geography, and history, Manifest Destiny being a mirror of Russia’s own drive toward the Pacific. Americans, too, loved Russian literature, chess, ballet; summits, joint ventures (like Apollo-Soyuz), people-to-people TV-bridges, scientific exchanges. With communism gone, Russians expected Russo-American friendship to blossom. Alas, most Americans forgot Russia as soon as the nuclear threat was no more. For those on the left, there was also a sense of betrayal: a flight to Moscow was no longer a trip into the future.

To please America, Yeltsin’s government quickly abandoned USSR’s most unsavory clients. Russia even gave the Americans a map of the electronic bugs in the US’s Moscow Embassy. In return there was little thanks and even less reciprocity. Symbolic was the case of the Jackson-Vanik Amendment of 1975, which tied US-Soviet trade to the level of Jewish emigration from the USSR. By 1992, emigration from Russia was absolutely free but Jackson-Vanik remained on the books well into the younger Bush’s presidency.

Russians of all stripes had been shocked by the rapid dismemberment of Yugoslavia, applauded, even facilitated, by "The West”; by America’s treatment of Serbs , Russia’s (and America’s) truest allies in both World Wars. Not surprisingly, by 2000 the majority of Russians viewed America unfavorably.

Putin was determined to reverse this trend. He believed in a Russo-American commonality of interests, and he personally liked George W. Bush.

Putin was the first to call Bush on September 11, and he offered what America needed: The Northern Alliance to help the US to defeat the Taliban and capture Bin Laden; transit for US and US-allied forces over Russian territory; Russian bases in Central Asia; intelligence; supplies; indeed everything America might need to fight terrorism. All of this and more Putin delivered, ignoring grumbling among his military and intelligence chiefs.

On a personal level, Putin was willing to stand by his friend George – even when this was contrary to Russia’s interest. Putin – and Russian elites – loved the ABM treaty, mostly for its nostalgic symbolism of US-Soviet parity. When George W. Bush decided to withdraw America from ABM in order to facilitate the Strategic Defense, most Democratic Senators and even a couple of "arms-control” Republicans opposed it. With Russia’s help they hoped to stop Bush.

I remember a TV pundit, openly supportive of the ABM treaty, asking Putin a softball question – if the USA abrogates the treaty, Russia will, of course, strongly react: build more offensive weaponry, undertake some asymmetric actions, all leading to a new wave of the Arms Race. Not so, replied Putin. While we prefer to keep the treaty, America’s withdrawal from it isn’t a threat to Russia’s security – America is our friend. No arms race, no counter-actions. Not surprisingly, the opposition to Bush melted away. Thanks to friend Vlad, Bush got his SDI.

Putin didn’t look for a quid pro quo – rather for understanding, friendship, long-term partnership, all based on a commonality of interests. For Bush, however Russia was, and was supposed to remain, a reliable sidekick, a pupil to be taught how to behave. And on a personal level, can you imagine Bush saying, condescendingly, something about seeing a soul – referring to Tony Blair or to Saudi Prince Bandar?

Ten years ago a Russian diplomat told me "In our government, there is only one man who still believes that Russo-American partnership is possible, and worth aiming for. Because that man is Vladimir Putin the rest of us follow. But if Putin would ever lose his interest in America, our policies would change overnight.”

Putin’s patience with US anti-Russian policies – NATO expansion toward the East, despite all assurance that this would never happen; America’s support for every country, every politician able to portray itself as an enemy and would-be victim of Russia – began to run thin. No more double standards, he said.

In 2008, the US sold, on credit, some weaponry to Georgia, then at loggerheads with Russia. A few months later, Russia sold weapons to Venezuela, for about the same sum (under a billion dollars). The US government, surprised, protested. Russia’s reply: if you can give weapons to Georgia – give, because you would never get a penny back -- why can’t we sell weapons for hard cash?

Today, US-Russia relations are in a very dangerous zone. In his latest State of the Union address, President Obama named only one state as an American enemy: Russia. The second enemy was a non-state entity, ISIL. (In an earlier speech there was a third major culprit, the Ebola virus). Obama credited the US-led embargo with Russia’s "political isolation” and "economy in shatters,” and promised more. Unfortunately, this is purely wishful thinking. Russia’s economy is much better than the USSR’s ever was. And within a week of the State of the Union, Putin was signing agreements in Turkey and Egypt, and his Defense Minister in India. Even in Latin America Russia has more friends than the USA. If further driven by American hostility, Russia, at some point, will reciprocate in kind, supporting American enemies all over the world, an old Soviet practice.

So far, Putin resists the temptation, and the urging – of his aides, and of the vast majority of the population – to go tit-for-tat. America should try to diffuse tensions and to reach an understanding with Russia before the current hatreds become fixed and institutionalized as it was during Cold War I.