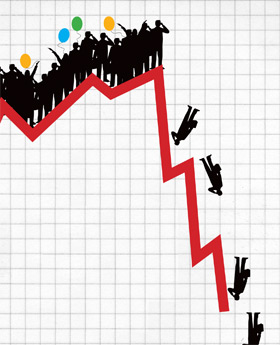 I started to read the ukr.net news stream to see how things are with our default. But what did I find? The stream is full of news about Greece's default, but the fact that our own country is on the brink is reflected by only 5% of the news which are returned by the "default" news search. The point here is that our media are once again distracting Ukrainians with news of the "the neighbors' cow died" variety. Everyone remembers Goebbels' famous dictum that the more monstrous the lie, the more willing people are to believe it, but there's another phrase he uttered as the Reich was collapsing:

"All propaganda loses its force as soon as it becomes too obvious."

That's our current situation--today I walked past the Shevchenko Park (next to the Vladimirskaya Street) and saw a spontaneous market there. Considering that I often go there and even a month ago there was nothing of the sort there, it's a symptom. The economy is degrading and returning to its '90s condition. A huge flea market which disappeared during the Yanukovych era came back to life near Petrovka. And there are hundreds of such examples. In the meantime, Yuriy Prodan who was removed from the post of minister of coal and energy six months ago is being proposed for the post of minister of ecology. It was Prodan who back in the day messed up the process of converting Ukraine's nuclear powerplants to US fuel (a very risky and dangerous undertaking). But now he's being pushed into ecology. What a jack of all trades he is.

In the meantime, the country's economy is collapsing, even the biggest state firms, monopolists like Ukrenergo and Energoatom are cutting salaries and sending people on unpaid furloughs, while "specialists" are continuing to wreck the country even as the media exists in some parallel universe. Where is the situation going? Time will tell, but I doubt things will turn out well.