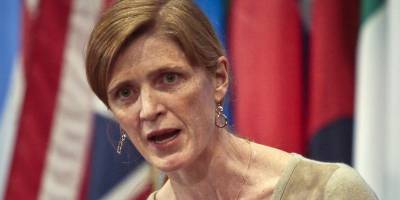 U.S. Ambassador to the United Nations Samantha Power testified before the U.S. Congress on June 16 about the war in eastern Ukraine. Her testimony was the subject of a story we ran on Monday of this past week. A helpful reader got back to us and pointed out that we had missed the most important part of it.a Apparently, Ambassador Power lied to the committee she was testifying before, thereby committing a felony.

Congressman Rohrabacher, one of the loudest critics of Obama’s Russia policy, asked her if she thought it might be possible that the majority of the civilian casualties killed in Ukraine were victims of the Ukrainian army. It was a "gotcha” question, because this is a universally acknowledged fact.

Here is what the ambassador answered: "I think it is highly unlikely on the basis of reports we have received from the United Nations and the OSCE.” See 1.50 in the video:

This statement is demonstrably not true. Reports from the UN and the OSCE conclusively demonstrate what it obvious to everyone even halfway paying attention – that the victims are almost universally victims of Ukrainian army shelling.

It is starkly preposterous to suggest otherwise, because even a dimwit could grasp that the separatists are unlikely to bomb their own people. It is simply not plausible that the ambassador believes this, and is not aware of the facts.

Ironically, Power is the author of a book which studies US foreign policy responses to genocide, so she has more than a passing interest in these issues. The book’s title is A Problem from Hell: America and the Age of Genocide,

She has made protection of human rights a hallmark of her career, yet she is one of the most energetic and committed boosters of the aggressive Ukrainian military campaigns in the East, which have featured the most barbaric human rights violations imaginable – shelling defenseless civilians – children and elderly, with horrific, blood-curdling casualties, visible for all to see in gory detail on Youtube.

The shelling serves no military purpose and is done only to terrorize the local population in the hopes of triggering a Russian response.

Here is what the law says: (Deb Willoughby on Answers.com):

The penalty for lying to Congress can include fines and or imprisonment.

(a) Except as otherwise provided in this section, whoever, in any matter within the jurisdiction of the executive, legislative, or judicial branch of the Government of the United States, knowingly and willfully-

(1) falsifies, conceals, or covers up by any trick, scheme, or device a material fact;

(2) makes any materially false, fictitious, or fraudulent statement or representation; or

(3) makes or uses any false writing or document knowing the same to contain any materially false, fictitious, or fraudulent statement or entry;

(c) With respect to any matter within the jurisdiction of the legislative branch, subsection (a) shall apply only to-

(1) administrative matters, including a claim for payment, a matter related to the procurement of property or services, personnel or employment practices, or support services, or a document required by law, rule, or regulation to be submitted to the Congress or any office or officer within the legislative branch; or

(2) any investigation or review, conducted pursuant to the authority of any committee, subcommittee, commission or office of the Congress, consistent with applicable rules of the House or Senate.