Today, the new Odessa governor Mihail Saakashvili (fugitive ex-president of Georgia) has announced on his Facebook that he has met with the US Ambassador and they arranged to have US policemen train a new local force. Saakashvili also stated that USA will be paying his team's salaries, but later edited the statement to say USA will pay for some "innovative government services". 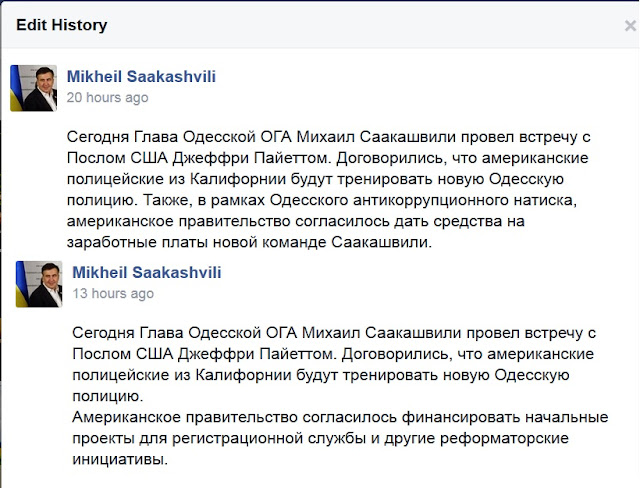 Of course, the mass media had a field day with this statement - a fugitive head of pro-American oppressive regime admits that he's back on the payroll of his former masters!

What's more, they're helping him rebuild his police state (*Saakashvili cracked down on political protest and quadrupled the number of prisoners in Georgia - by the end of his rule, Georgia had 3rd highest incarceration rate in the world, after USA and Turkmenistan)!

Of course, US-organized nationwide police training programs actually predate Saakashvili becoming a governor of Odessa; they were probably started a few months after Maidan, when it became clear the professional police were not willing to carry out the criminal orders of the usurpers, and the nationalist thugs lacked even minimal competence.

However, this newest development does expand a sad Ukrainian joke:

How do we know Ukraine is more tightly controlled by the US federal government than, say, Florida?

+2) In Florida, State Dept isn't paying the salaries of the local government

+3) In Florida, State Dept doesn't replace the police force with one trained by them