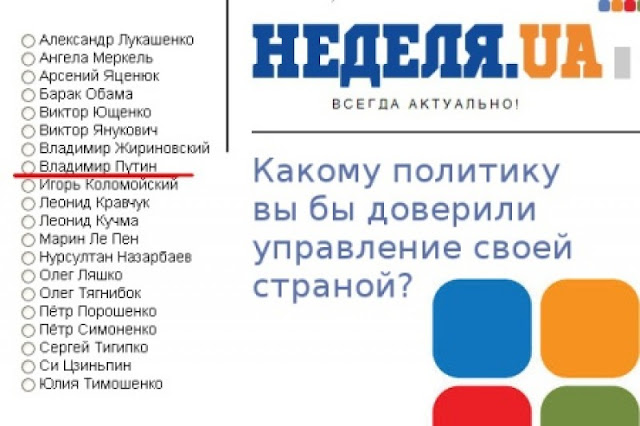 A new information tragedy in Ukraine. It started so innocently: the nationally conscious patriotic website Nedelya.ua organized a survey. The question was: which politician would you entrust with governing your country?

41664 votes were cast. The results were a knock-out blow for the organizers--a full and crushing victory for Vladimir Putin. Treason!

Let's look at the results:

Even Zhirinovskiy doubled Poroshenko's score! In spite of the common wisdom which says that if Vladimir Volfovich takes up the Ukrainian question, the nationally conscious will be left in charge of Lvov, and even that will be a lease...All in all, pretty bad news for the embroidered shirt crowd...

One could of course argue that Kremlin trolls attacked the poll en masse, pushing the Putin button in order to play mind games with the patriotic citizens of Ukraine and to establish the "bloody dictatorship of the Moscow tyrant." One could, but who will believe it. The site is well known in a very narrow circle, and is rather not frequented by "trolls and bots": this landfill of an internet resource is visited mainly by the nationally conscious warriors.

Now about Putin. It's no wonder: he is considered to be the world's number 1 politician according to the global media community. That's the result of the 2013 world survey of 175 news agencies and media outlets around the world. Naturally, nedelya.ua did not participate in that survey but confirmed its results nevertheless: even in Ukraine where the population is being thoroughly zombified and threatened with the image of the Russian president 24 hours a day, his rating is off the scale. Therefore Ukraine's national idea, defined in terms of "Ending Putin" is suffering a defeat on all fronts.

J.Hawk's Comment: I'd add that even it was "bots and trolls" voting for Putin, where is the pro-Poroshenko/Yatsenyuk/Lyashko/Timoshenko enthusiasm? Right? That, in my view, is what speaks in favor of its authenticity, the fact that none (NONE, KARL!) of Ukraine's leaders elicit respect, admiration, emulation, gratitude, love, or even mere tolerance. No, they are all hated or, worse, despised. Putin, on the other hand, commands respect, grudging or otherwise, even in the US.

This poll, incidentally, is indicative of a crucial difference between Ukraine and Russia. Russia has a strong tradition of statehood and, with it, a strong tradition of an exacting system of cadre selection and training which fails only rarely. Ukraine has neither. Therefore the sort of incompetent mediocrity that is virtually every mid-level and senior Ukrainian official (can anyone name anyone who doesn't fit that characterization) would never make anywhere close to the top in Russia which is generally run by people who actually know what they are doing (what a concept!), and where the incompetent mediocrities have been largely relegated to the ranks of the "liberal" "opposition" which pines for a Maidan because that's the only way they could come to power.

And, as Comrade Stalin once said, "cadres decide everything." The fate of countries and empires turns on their ability to discharge the functions of office they occupy. Ukrainian elites' inability to do so means Ukraine, as a state, is doomed. If it had "someone like Putin" (and Putin's cadre which actually runs the country in his name), it just might pull it off. But it doesn't so it won't.