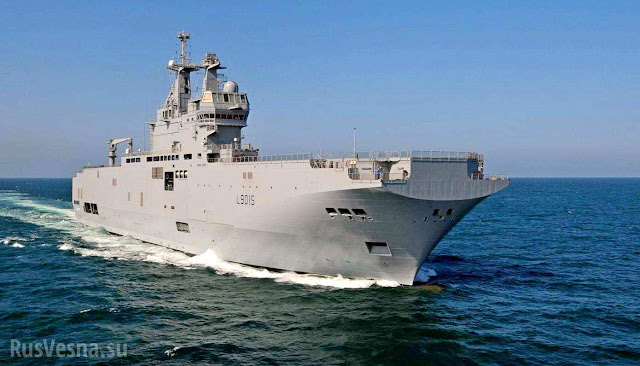 French President Francois Hollande has a policy that harms the economy, writes the French media.

In particular, it concerns the failure of two very important deals for Paris - a contract for the supply of two Russian helicopter carriers of the "Mistral" type and the contract for the sale of 126 Dassault Rafale multi-role fighters to India.

This week it was officially announced that Moscow and Paris terminated the contract for delivery of two helicopter carriers of the "Mistral", built by order of the Russian Federation. Elysee Palace was forced to pay more than € 1,1 billion. Says the French newspaper "Boulevard Voltaire”, Hollande does not care about the money issue.

"The insult that Francois Hollande struck Vladimir Putin by refusing to carry out the contract for the supply of "Mistrals" will cost France billions. But he (the French president.) - is a Socialist, and money mean nothing to him", - quotes Sputnik.

In addition, in late July the deal between Paris and New Delhi, India, to supply 126 multi-role fighters Dassault Rafale was disrupted. The deal is estimated at $ 20 billion.

Indian authorities said they made the decision to abandon the French aircraft. As the Boulevard Voltaire quotes Rafale fighter jets "proved to be a mirage which dissolves in the bottomless pit of stupid decisions of the French government."

The publication stresses that the incompetence of the French authorities is pushing the country to the brink of the abyss, but getting out of this abyss will take decades.

Double fiasco became "political and economic catastrophe" for France, which is desperately trying to become a reliable supplier of arms.

Boulevard Voltaire emphasizes that this disaster was the result of mindless strategy of Foreign Ministry of the country, as well as "reckless policies of Hollande in Ukraine."

In addition, the publication puts the blame on the president for his "absurd anti-Russian policy which has led to the loss of many millions for French farmers as a result Russian product embargo."