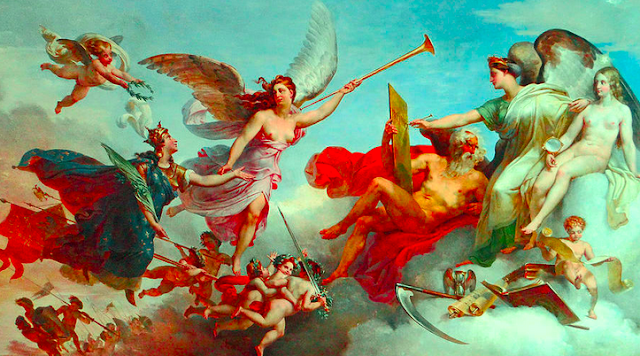 France, hampered by inaction and submission, has become a specialist in yielding up its assent when the countries of the entire world favor their own interests. We've got Mistral losers, Rafale losers, French losers -- all through the fault of a government with no ambition, with no honor, and with no pride.

Translated from French by Tom Winter

France, hampered by inaction and submission, has become a specialist in yielding up its assent when the countries of the entire world favor their own interests. We've got Mistral losers, Rafale losers, French losers -- all through the fault of a government with no ambition, with no honor, and with no pride.

The voice of France has not been expressed internationally since February 2003! That was when Dominique de Villepin intervened at the UN to say "No” to the interference of France in Iraq. Since then, nothing.

What have we got since: a blind and tame Atlanticism. A vision of Russia modeled on Washington's. Culpable complicity in the events in the Near East and the Middle East. Independence and sovereignty are not in the vocabulary of those who govern us; France, the 51st state of the United States ...

Qatar, Saudi Arabia: the privileged partners of France are actually the allies of the United States. The allies of our allies are our allies, and we are going to fight against Daech with those who are strongly suspected of financing Daech. We are just floating there, in a delirium.

Non-delivery of the Mistral to Russia, economic sanctions against the latter that turned against our farming people (a lose-lose deal for everyone), transatlantic treaty on track (chlorinated chickens and hormoned beef on their way to our dinner plates) ... This is what comes of putting the economic interests before the human.

France, submissive and impotent, is now no more than the shadow of itself, a second-string state economically stifled by Brussels and Merkel. France -- prisoner, on the international level, of its own Manichean logic. The cold war has in fact never really ended ... France, by blindly following its US ally, enters fully into this black and white logic, where Russia is the big bad wolf, Ukraine is the victim, and they dare put Daech and Assad in equipoise.

France must regain its independence, which will be much more conducive to peace than the current positions, which are both complicit and hazardous.

For this, France must: get out of NATO, actually a reserve army of the United States that's ready to intervene according to their wishes;  Reorient Europe around the nations that compose it, a Europe that respects sovereignty, peoples, and national identities, because as it is now, Europe is a veritable manacle which suppresses the sovereignty of nations.

The original title is "France must recover its independence," and the text makes clear several times over that this means independence from the United States! Hence the title I have used. I agree with Hélène Carrère d’Encausse that peace in Ukraine will have to come without US involvement. I am thus always heartened when I read calls for an independent Europe.

Top
popular in the journal
Last month, US Secretary of State Antony Blinken argued that the next few years may see Washington facing a "growing rivalry" from Moscow and Beijing.
Top stories from the Russian press on Monday, February 8th
As the Senate prepares to confirm Nuland for Under Secretary for Political Affairs, a reflection of her last 30 years in government shows how she was connected to nearly ...
"We are united in our resolve. There can be no doubt in a democracy, force should never seek to overrule the will of the people or attempt to erase the outcome of a ...
It is not the Biden administration that Russia should be concerned about when it comes to climate, but its own inaction, which Moscow risks paying for in both economic ...