Hollande and Merkel have made public statements in support of Putin's proposal's today to return to the Minsk II Agreement process on September 1st, next Tuesday.  The European commitment to salvage Minsk II was reported by Reuters, AP, Tass, and other international news agencies around the world.
August 29th, 2015 -
Fort Russ - by: Joaquin Flores - 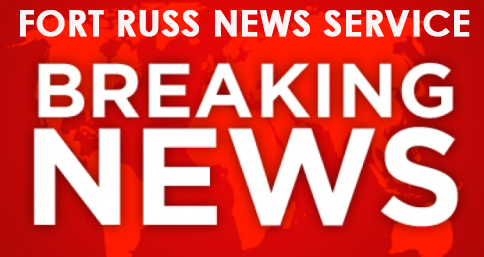 Hollande and Merkel have made public statements in support of Putin's proposal's today to return to the Minsk II Agreement process on September 1st, next Tuesday.  The European commitment to salvage Minsk II was reported by Reuters, AP, Tass, and other international news agencies around the world.  These statements follow an emergency telephone conference held today, Saturday August 29th, by the three leaders.
This comes on the heels of a meeting with Poroshenko on August 24th with the de facto EU leaders.
On the 24th, media reports conflicted.
A number of US outlets cited Poroshenko's comments on Independence day that "the times of pacifism" are "over". These went with other reports from Ukrainian officials that Germany would back Ukraine's efforts.
This painted a general picture that the US had prevailed in its attempts to end Minsk II, and that the German position had changed.
In stark contrast to this were Merkel's own statements on the 24th:
"The first and foremost condition is that everything is done to make the ceasefire agreement a reality. The task at hand means that what we agreed in Minsk has to be respected,”
Between now and September 1st, the belligerents in the Donetsk region of will attempt to finish their operations which resumed some weeks ago. 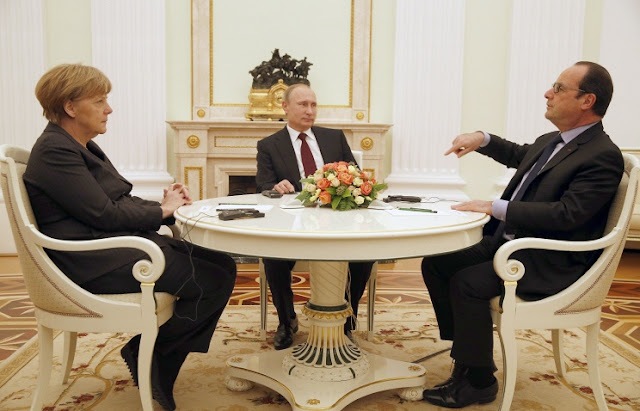 One significant factor in this result was the UAF's failures in recent weeks to gain traction.  The UAF amassing upwards of 90k soldiers along the contact line, and the OSCE documented a buildup of long-range weapons banned by Minsk II.  Nevertheless, several attempts to develop momentum on the Kiev side ended in failure.
Various skirmishes and attempts to probe the NAF lines revealed a very well prepared Novorossiyan force.  Each major skirmish ended in a UAF defeat.  These events are placed in the background of a lack of morale among most UAF soldiers. 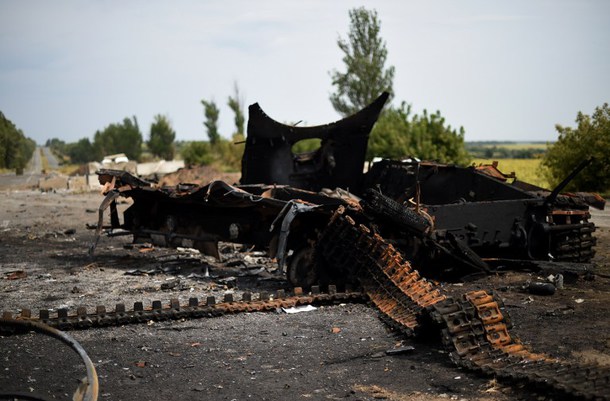 The regular UAF is generally ill equipped and have reported shortages.  Moreover there is a general consensus that the Kiev government is either incapable or unconcerned with adequately resolving the present crisis.
This has led on the one hand to increased support among UAF soldiers for the far-right extremist 'volunteer battalions' often associated with the Pravy Sektor, and on the other hand  has led to defections over to the NAF forces.
One of the biggest crises facing the UAF is the inability to meet its conscription goals.  Those who are conscripted are often told they will not see any fighting.
In connection with this are numerous reports that international mercenaries, primarily from NATO countries, have been engaged in most of the UAF operations.  Analysts say these were meant to provoke a stronger NAF reaction.
These may explain the smaller scale of the operations in recent weeks, and may also mean that UAF conscripts are being kept away from fighting.
The renewed commitment of Merkel and Hollande to Minsk II is widely viewed as a diplomatic and strategic victory for Putin.
Furthermore the Minsk II Agreement was unanimously backed by the UN Security Council with  resolution 2202 (2015).
This could mean that a Security Council member may have legal authority to take a more robust action, perhaps including the use of the military, to enforce the Minsk II Agreement on any side which declared its intention to break it.
Such action would mirror the US president Clinton's bombing campaign of Iraq in 1998, when Iraq was accused of failing to adhere to the UN Security Council resolution on weapons inspections.
Much media focus on Minsk II revolves around the removal of heavy armaments from the line of contact.  But Minsk II requires much more, and may result in a major power shift in Kiev once implemented in full.
The Minsk II agreement requires a political process to change the Ukraine constitution.  This would decentralize authority, grant special status to the Lugansk and Donetsk oblasts, and must be made in agreement with the DPR and LPR representatives who were part of the Contact Group.
This means Kiev cannot appoint the leadership of Lugansk and Donetsk, nor can they hold new elections in the disputed regions to arrive at other leaders.
The new Ukrainian constitution would likely require new elections in Kiev, bringing in a new government.
If Lugansk and Donetsk participate in these Kiev elections, the new government could have a much different position than the Poroshenko bloc.  Recall that the people in Lugansk and Donetsk boycotted the May 2014 elections, which saw the election of Poroshenko.