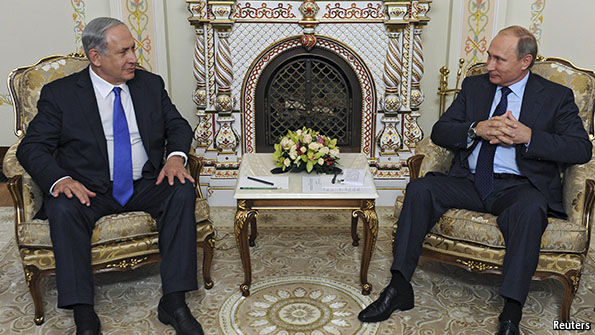 Though on opposite sides of the Syrian conflict, Binyamin Netanyahu and Vladimir Putin agree on a lot

AS Vladimir Putin, Russia's president, was on his way to speak at the UN General Assembly in New York this week, where he stressed that Russia is supporting the Syrian army against Islamic State (IS), Israeli forces launched three guided missiles at outposts of that army.

The attack, in retaliation for two Syrian mortar rounds landing on the Israeli side of the Golan Heights, was a clear indication that Israel does not feel that Russia’s new and growing military presence in Syria inhibits its own operations there. On September 30th, Russia’s newly-deployed fighter-jets carried out their first strike on IS and other jihadist positions, but that is hardly likely to bother Israel either.

The emergency meeting in Moscow between Mr Putin and Israeli prime minister Binyamin Netanyahu on September 21st, seems to have put Israeli minds at ease. The Russians will not endanger Israel’s strategic interests in Syria. For his part, Mr Netanyahu assured the Russians that Israel would not help those trying to remove their ally—"we are neither for or against (Syrian president Bashar al-) Assad” he said.

At the same time Mr Netanyahu sought assurances that Israel could continue to operate in Syria, particularly interdicting Hezbollah convoys transferring advanced weapons to the organisation’s arsenal there. According to Israeli sources, he was satisfied that Russia, despite cooperating with Hezbollah and its Iranian patrons in protecting what remains of the Assad regime, would not help them increase their already significant influence in Syria.

"Russia’s main interest in Syria is maintaining its warm-water port in Tartus” says one Israeli official. "That has been Russia’s overriding strategic concern for centuries. In addition they want to make a geopolitical point by keeping Assad in power.”

Israel is reaping the fruits of a long and delicate engagement with Mr Putin, in which its leaders have heeded his warnings not to sell arms to his rivals in neighbouring countries, Ukraine and Georgia. At the same time Israel has supplied Russia with drone technology.

Israel has also largely turned a blind eye to Russian activities on its border, including the maintenance of a GRU (Russian military intelligence) listening-base on the Syrian side of the Golan. Russia has continued supplying weapons to Israel’s enemies, but despite various statements to the contrary, has so far heeded Israeli warnings and not (yet) supplied Iran advanced systems such as S-300 anti-aircraft missiles.

While the United States remains Israel’s main strategic ally, despite a difficult personal relationship between Mr Netanyahu and President Barack Obama, Israel has been working hard in recent years at diversifying its alliances. It has courted not only Mr Putin, but the leaders of other regional powers including Egypt and Saudi Arabia, and farther afield the prime ministers of India and Japan. As America’s influence in the Middle East declines, this should serve Israel well.

"The last thing Putin needs now is a fight with Israel, he’s too busy scoring points against the Americans,” says Zvi Magen, a former Israeli ambassador to Moscow. "Israel made clear to him that we have no real problem with Assad, just with Iran and Hizbullah, and that message was understood.”