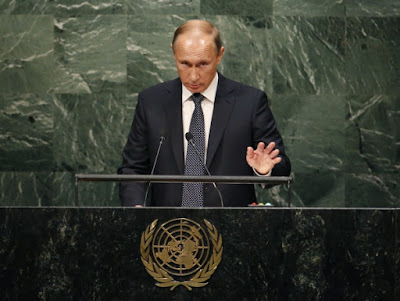 Fields littered with hundreds of thousands of corpses, destroyed cities, people suffocating in gas chambers in concentration camps, a mushroom cloud left after the explosion of an atomic bomb, villages scorched by napalm - the previous century left an abundance of such pictures as the era of global wars, social cataclysms, and turmoil. Does it seem like more vivid lessons should teach history to humanity?

Formally, the leading global political leaders declare a negative attitude towards solving international problems by force. When reading the Charter of the United Nations, tears of emotion literally dim the eyes. Written there are the following: "friendly relations among nations,” "international cooperation in solving international problems,” "all members of the United Nations will resolve their international disputes by peaceful means.” The organization seeks "to save succeeding generations from the scourge of war, which twice in our lifetime has brought untold sorrow to mankind, and to reaffirm faith in fundamental human rights, the dignity and worth of the human person, the equal rights of men and women, the equal rights of nations both large and small, and to establish conditions under which justice and respect for obligations arising from treaties and other sources of international law can be maintained.”

How beautiful the world would be in everything written in the UN charter corresponded with reality! But everything is quite different. "Grad” missiles crumble cities in the Donetsk and Lugansk regions, American rockets destroyed Baghdad and Belgrade in the name of democracy, masked men film on camera as they behead dozens of people, and millions are leaving their homes in search of safety in other countries. The world has encountered such images in the new millennium.

All this makes one seriously think about the prospect of a new global conflict begin unleashed. Many people would say that is already has been, but only in other forms - information wars, economic sanctions, changing cultural codes, etc. But will the affair get to an open phase, when others will throw atomic bombs at each other? This is a big question.

The main problem, in my opinion, lies in the natural tendency of the state towards expanding its territory. On this path, there are competitors. Hence conflicts. All wars, in their essence - are redistributions of power, property, and territory.

The claim to world domination is the highest degree of power ambitions of a state. The dream of conquering the universe bothered all great dictators: from Alexander the Great and the Roman emperors to Napoleon and Hitler. And it is important to note, that such "habits” were always accompanied by ideas of some kind of exceptionalism or elitism of a political community that aspires to rule over all others. For example, Hitler talked of the so-called superiority of the Aryan race. But then no one recognized his ambitions or took them seriously. Europeans concluded treaties with Hitler, and the US tried to use him to its advantage.

Is there something of the sort in contemporary international politics? Yes, more than enough! Barack Obama openly speaks of "American exceptionalism,” as if giving the US the right to "export democracy” in the form of bombing other countries without the consent of the UN. Radical Islamists believe that they must spread their religion, which they consider to be the most correct in the whole world. The US tries to flirt with them. And, apparently, the lesson of Hitler taught nothing.

Ukraine became a new point of tension, where nationalism became a pronounced, radical right-wing fascism. Statements in such a spirit even come from the mouths of officials. A comparison with the situation in international affairs in the ’30’s of the past century just begs.

Ideally, of course, mind should prevail over animal nature. And for this much is being done in the cultural sphere. But we see that the peaceful balance of international relations rests exclusively on strength, and not on humanistic ideals. Like before, only weak countries are attacked, and their opinions are not taken into account in the decision of international affairs. As before, the world is still governed by the right of might - this is a fact. the United Nations, UNSECO, and the OSCE are all, unfortunately, spices, which do not change the taste of the dish.

What can save the world from a new war? The dream that everyone in the world will suddenly be imbued with pacifism and cease to right is from the realm of fantasy. And what from the real of reality? What is needed is a force which is able to ensure the functioning of international law and the ideas of humanism.

The US is objectively the strongest country now, despite all the negative tendencies within it, but it cannot and is not going to be such. It’s not hidden that first and foremost for America are national interests. So who?

Only Russia, throughout its history, has shown itself to be a country which is capable of rising above its own ambitions. Here is worth remembering the defeat of Napoleon, fascist Germany, and more. Russia has always sacrificed itself for the sake of peace, for the destruction of evil. It is a paradox, it is our tragedy. And we have once again proved it, having broken with the ideology of communism, and having given into unprecedented concessions in the sphere of disarmament. We were deceived, but we prevented a war.

At the UN General Assembly, Vladimir Putin once again declared the readiness of our country to cooperate with all countries for the resolution of international problems, and he straightforwardly pointed out global threats and the possibilities of their deflection. By the same token, Russia ensures the real functioning of international law. I am sure that if the US doesn’t want to prevent this, then they’ll go for cooperation. Too obvious and too real is the threat of a new world war.