Margaret Kimberley's Freedom Rider column appears weekly in BAR (http://www.blackagendareport.com), and is widely reprinted elsewhere. She maintains a frequently updated blog as well as at http://freedomrider.blogspot.com. Ms. Kimberley lives in New York City, and can be reached via e-Mail at Margaret.Kimberley(at)BlackAgandaReport.com. 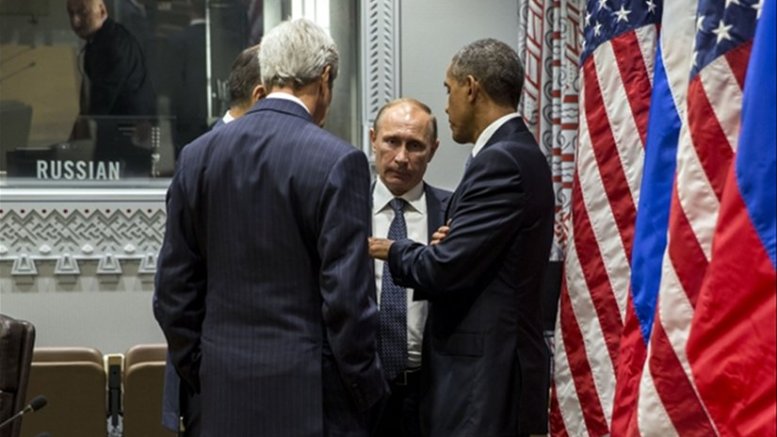 The mendacity of the United States and its allies has been on full and transparent display as the pace of events quicken around the world. On September 28, 2015 Barack Obama and Vladimir Putin each made his case before the United Nations General Assembly and both were true to form. Putin said that America should respect other nations’ sovereignty. Obama exceeded his allotted speaking time by twenty minutes only to say that he didn’t care about anyone else’s sovereignty.

While Putin’s comments were worthy it must be pointed out that he is somewhat late in showing up for the party. Despite claims to the contrary, Russia has wavered in its response to the United States, NATO and gulf monarchy attack on Syria. Whether out of fear, weakness, or other factors, the Russians have done little except veto security council resolutions which would have spelled the end of the Bashir al-Assad government.

According to Finnish diplomat Martti Ahtisaari, the Russians expressed a willingness to cut Assad loose if the terms were right. In 2012 the Russian United Nations ambassador told Ahtisaari that his government was willing to work out a deal. This hypothetical arrangement might have included Assad stepping down from office. Because of hubris and wishful thinking that his fall was imminent, neither the United States, Great Britain nor France responded to the overture. In a just world, no country would have a say in the fate of another, but the episode shows America’s uncompromising stand on gaining hegemony.

Now thousands of people are dead, millions are displaced refugees and Assad is on the ropes because of ISIS. The western nations were never interested in defeating ISIS, the child they spawned through their interventions. Fighting them only with rhetoric and one hand tied behind their backs, they hoped that ISIS would hasten Assad’s exit.

Not so Putin, who after firmly stating his intentions went about the business of bombing ISIS held territory. Because he exposed the big lie, the western governments and their media lap dogs are left with nothing but bizarre assertions. First they suddenly expressed concern about civilian collateral damage. Then they criticized Putin for bombing the Al Nusra front, an al qaeda off-shoot, instead of ISIS. In their attempts to deceive they admitted their own links with a group they once labeled as terrorist.

Now Putin is going after everyone who threatens Assad. This decisiveness ought to be cause for some relief but too many lies have been told at this juncture. While the man painted as a monstrous dictator dispatches the groups America claimed to want gone, the real face of terror makes itself known. The same week of the Obama/Putin United Nations showdown, Saudi bombing killed 130 people who were attending a wedding in Yemen. That toll was bad enough but their American partners in crime were bound to out-do them in the war crimes department.

The Nobel Peace Prize-winning group Doctors Without Borders operated a hospital in Kunduz, Afghanistan. They did so until an American gunship attacked in the early morning hours of October 3, 2015. Twenty-two people were killed including both staff and patients, some of whom burned to death in their beds. As fighting intensified days earlier the hospital notified coalition command, that is to say the United States, of its exact GPS coordinates. This effort to save staff and patients was for naught, as the Afghans and the Americans showed no regard for human life.

The horror of the slaughter was magnified by the corporate media’s collusion with the government. The New York Times had twenty different versions of online reporting about the attack but not one stated clearly that the United States military had carried out the crime. Without any evidence to back up the assertion, the Associated Press repeated and later retracted a claim that the Taliban were using the hospital as a base. Doctors Without Borders clearly refuted the lie and also pointed out that this particularly disgraceful attempt to escape blame was a de facto admission of a war crime.

Obviously there should be an investigation of the hospital attack, but the most important question is why the United States still occupies Afghanistan at all. The Nobel Peace Prize-winning president is so committed to imperialism that even other laureates aren’t safe from him. Nor will they be after January 20, 2017 when a successor takes office. The willingness to spill blood is a prerequisite for getting the seat behind the oval office desk.

Bombs will fall on the innocent and the guilty alike. The best hope for Afghanistan and for Syria is if their people have real democracy and are empowered to choose the governments they want. In the meantime, imperialism must be met with as much force as can be mustered from the outside.

While the corporate media mouthpieces repeat spurious claims about Putin "biting off more than he can chew” the truth is clear for all to see. The Russian president made it plain when he said, "I relate to my colleagues the American and French presidents with great respect but they aren’t citizens of Syria and so should not be involved in choosing the leadership of another country.” When that definition of democracy is protected and respected, people will be safe all over the world. Until that time the criminals must know that they face opposition. Then perhaps hospital patients can rest a little easier.