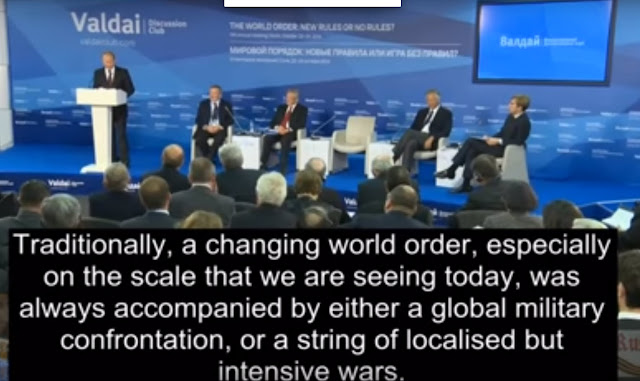 A changing world order has always historically been accompanied by a great increase in military confrontation.
We look back at last year's presentation in order to understand much of the context of this year's, where Putin gave his presentation yesterday. The concerns that Putin expressed in 2014 are still fresh and relevant for the unfortunate reason that they have been ignored by the US.
It is truly amazing to see the contrast between the statements on international affairs by US presidents like Reagan, Clinton, Bush, and Obama on the one hand, and Putin's on the other.
The American way of explaining the world is riddled with mind numbing condescension and abstraction. American exceptionalism is expressed in a meandering construct of discursive traps which circularly justify themselves.  The US method is misleading, and uses terms which either have no consistent or clear meaning, are legally meaningless, or actually misrepresent the foundations of the international system.
Putin, conversely, actually gives meaningful and factual lessons on history, geopolitics, and international relations. We can actually understand, from Putin's talk, international relations as they have evolved since World War II.  The international system is explained coherently and consistently in the language of international relations by Putin.
The entire 40 minute talk is presented with subtitles by Inessa Sinchougova.