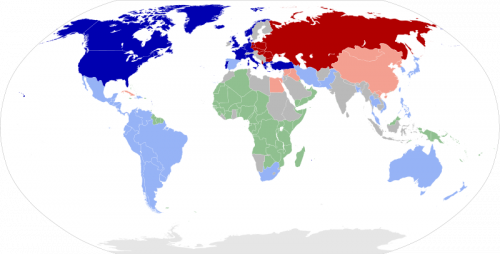 Foreign Minister Sergey Lavrov blames the "bloc thinking" of Western countries for failing to adjust to the present realities.
"Unfortunately, the Euro-Atlantic military-political processes are lagging behind the rapidly changing realities," Lavrov said at the Federation Council on Wednesday. "The political elites of a number of Western countries are still obviously backsliding into bloc thinking."
"Certain politicians wish to reanimate the image of a geopolitical adversary in the person of our country," the minister said, adding that such scare tactics helps to preserve "a strong military-political bond between the United States and European NATO members."
Although Lavrov did not mention Republican challenger for the White House, Mitt Romney, by name, the comments seem too well-timed to be a mere coincidence.
In March, Romney demonstrated the chasm that separates Democrat and Republican thinking on foreign policy when he called Russia the "number one geopolitical foe" of the United States. The comment recalled antiquated Cold War rhetoric and showed that the so-called Russia-US reset is just one presidential campaign away from irrelevancy.
"Cold War black-and-white thinking looks increasingly absurd against the backdrop of profound and, I would even say, tectonic shifts we are witnessing," Lavrov said.
The Russian minister suggested that the increase in rhetoric being directed at Russia may have a lot to do with the "process of division of power and influence...taking place on the global landscape," which sees the role of the Asia Pacific region increasing as it becomes a "major driving force of economic development."
Unfortunately, instead of western leaders looking to the booming eastern economies as a means for escaping from the clutches of a deepening economic recession, they are ratcheting up the rhetoric and spreading fear.
Thus, it should come as no surprise that given the frostiness in relations, the West is unwilling to sign a European security treaty together with Russia.
"Alas, our Western partners are not prepared as yet to accept the logic of implementing an indivisible security principle put forth in fundamental documents from the Organization for Security and Cooperation in Europe (OSCE) and the Russia-NATO Council," he noted.
Lavrov revealed that despite opposition on the part of some foreign leaders, the Russian initiative "has triggered rather energetic discussions on the possibilities and ways to upgrade the Euro-Atlantic security model."
The idea of bringing all European territory under one security umbrella was first mentioned in 2008 by former Russia President Dmitry Medvedev.
"I'm convinced that Europe's problems won't be solved until its unity is established, an organic wholeness of all its integral parts, including Russia," Medvedev said.
Indeed, it seems that until Europe frees itself from the scourge of Cold War thinking, an atmosphere of mistrust will dominate the region, with the United States able to manipulate the situation for strategic gain.
The most blatant example of Washington stepping into the void left by the Cold War is witnessed by efforts to build a US missile defense system in Eastern Europe, which threatens to destabilize the balance of forces between the two former Cold War foes. Moscow has even warned that the system threatens to spark another arms race.
Denied participation in the project, Russia insists on receiving guarantees from NATO that the system will not be targeted against its nuclear forces.
"Reliable guarantees based on clear and impartial military-technical and geographic criteria that this system will not be targeted against Russian nuclear deterrent forces are fundamentally important for us," Lavrov stressed.
The minister said it was essential that Moscow is assured that the purpose of the system is to defend against "missile threats emanating from outside of the Euro-Atlantic region, that is, not from Russia."
Lavrov acknowledged that thus far the parties failed to find a solution to this problem, but Russia is willing to continue dialogue.
The minister also mentioned Russia's concern over NATO's increased military activity near Russia's borders.
It is natural that we have questions concerning "increased military activity near Russian borders, the modernization and approaching of NATO's defence infrastructure and more frequent military exercises," Lavrov said.
The purpose of these exercises is unclear, he added.
Finally, on the question of resolving global hotspots, specifically in Syria and Iran, Russia will uphold the principles of the Charter of the United Nations, Lavrov mentioned in his report.

"We will continue to resolutely insist on the supremacy of law in international affairs," Lavrov pledged. "This is how we will move forward in our efforts to address the situation in Syria, the Iranian nuclear program and other crisis situations."