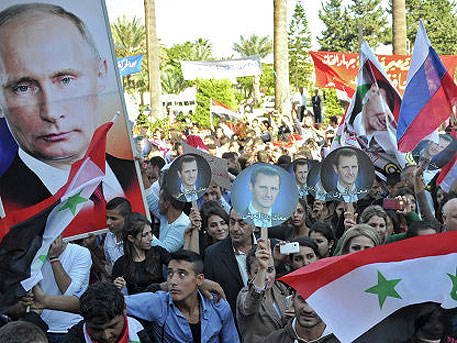 In Syria, a rally was held in support of Russian operations. Several hundred students gathered near the building of al-Baath University in Homs province.

In Syria, a rally was held in support of Russian operations. Several hundred students gathered near the building of al-Baath University in Homs province.

This town was for three years under the control of terrorists, with the positions of the terrorists being 100 metres from the walls of academic buildings. With the help of the Russian air force, fighters have managed to escape outside the city.

And now the residents of Homs went out to say "Thank you!" to the Russian military. They took to the streets with portraits of Putin and Assad, banners in Russian and Arabic.

The rally quickly turned into a real folk festival, with national music being played, with the citizens having fun, and some even began to dance.