Eleven million views. That’s how many times YouTube viewers around the world have watched Valentina Lisitsa sit at a grand piano to play Beethoven’s "Moonlight Sonata.”

"I found my audience online before I got on the big stage,” the New Bern-based pianist laughs. "Now I have this career and a relationship with a recording label and so on, but I can never stop doing the videos. I owe the people who helped to propel me to such fame, and also I do think there’s an educational mission.”

Lisitsa’s first YouTube video, shot by her husband and posted in late 2006, was a grainy VHS transfer of a Rachmaninoff etude in which the sound synch is so bad that the notes you hear don’t match up with what her hands are doing. Hundreds of videos and tens of millions of clicks later, the production values have changed but the content is the same — Lisitsa sits down at the piano, places her hands on the keys, and plays with spectacular, athletic passion.

Duke Performances brings the Ukraine-born Lisitsa to Baldwin Auditorium on Friday night with a program of short works by Scriabin and Chopin. It’s part of a typically busy year for a performer who has almost as many frequent-flyer miles as YouTube views. She’s performed in Spain, Sweden, Germany, France, Italy, Holland, the Czech Republic, Singapore, Indonesia, Colombia, Canada and the U.S. in this last concert season alone. 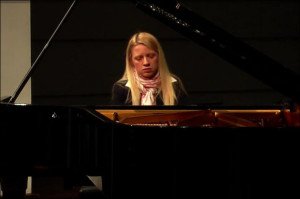 Valentina Lisitsa in performance in Hanover, Germany in 2009 (YouTube image)

One click and you’ll understand her appeal. The videos are a concert-goer’s dream, giving you multiple vantages that no ticketed seat could afford you, including extreme close-ups of her hands and tight-angle views down the length of the keyboard.

Seen from one side and then the other, Lisitsa sways and hunches over the keys. Sometimes there’s a tenth-row shot of the whole stage. Sometimes you even get a shot of her facial expressions, doubled in a reflection in the underside of the piano’s propped lid.

And then there’s the money shot, from directly over the keyboard, catching the inhuman action of Lisitsa’s hands in particularly fast sequences, showing the violence of the propulsive bursts necessary to move her hands up or down the keyboard. It’s virtuosic to the point of being frightening, and then very occasionally, in split-second moments, past that point.

"It was right when the GoPro, that action camera came out, and people were putting them on their mountain bikes and power gliders,” she says of the overhead shot. "So it did open a different angle toward the pianist. When you see from these angles, you see how much movement there is, how much agility. And then you realize why people want to do it.”

Sometimes her hands crouch and leap like those crickets that come out from the crawlspace at night. Sometimes a pair of fingers bites down into adjacent keys like the wide, awful head of a rattlesnake. Sometimes the tips of her fingers are playing the very bases of the white keys, right where the key disappears beneath the piano’s frame, and you hold your breath because you anticipate some sort of crash. It makes for absolutely intense viewing — and you can pause and rewind to scrutinize such moments.

As in her program at Duke, she plays short pieces online. Lisitsa’s videos are rarely longer than four minutes. "In this day and age, when everyone has a short attention span, they’re a blessing,” she says. "But of course there are so many wonderful small pieces and some of them have such depth. You have to be an actor, in a way, and you have to act the entire life of somebody’s tragedy or comedy or action movie in the span of basically two or three minutes. It’s amazing to be able to take people on this kind of journey with you.

"For audiences, it can be a challenge because it changes so quickly. But with classical music radio, you do love to hear shorter pieces. You get some concerto that you’re enjoying while sitting in traffic, but then you arrive at home and you never find out what it was.”

Lisitsa bemoans the fact that audiences of other musical genres never know the set list before the show, wanting to be surprised by each tune as it happens in concert, while classical performers must bear the burden of the pre-announced program. When she can, she lets the audience choose the program, whether through requests made the night of the performance or in online polls held for weeks leading up to it.

"When you go to the restaurant, you want to show them the menu, right? We don’t want a preset menu unless it’s all-you-can-eat. But with music it’s nice for me to come onstage and say, ‘What are you in the mood to listen to tonight? Do you want to have some Beethoven for starters, and some Chopin or contemporary music for the main course?’ That’s fun and interactive.”

Not all presenters feel good about giving over this level of control. Uneasy about the openness of an online poll to determine Lisitsa’s program, a German festival of 21st-century music made ticket-buyers return postcards with their choices. That way, they could count up votes behind closed doors and still announce the program as audience-chosen.

Lisitsa laughs about the illusory safety of the paper trail. Her 10-year-old son was counting paper votes for shows in Europe and noting that people cheated by voting more than once for what they wanted to hear. She sees stuffing the ballot box as an expression of enthusiasm that she’s more than happy to oblige through an endless concert schedule and a steady torrent of videos.

"It’s wonderful to meet young people after a concert who say, ‘I came because of your videos, and this was my first classical concert.’ That’s the best. You always hope that they will come again and again and again.”