Canadian Eric Walberg is known worldwide as a journalist specializing in the Middle East, Central Asia and Russia. A graduate of University of Toronto and Cambridge in economics, he has been writing on East-West relations since the 1980s. He has lived in both the Soviet Union and Russia, and then Uzbekistan, as a UN adviser, writer, translator and lecturer. Presently a writer for the foremost Cairo newspaper, Al Ahram, he is also a regular contributor to Counterpunch, Dissident Voice, Global Research, Al-Jazeerah and Turkish Weekly, and is a commentator on Voice of the Cape radio. 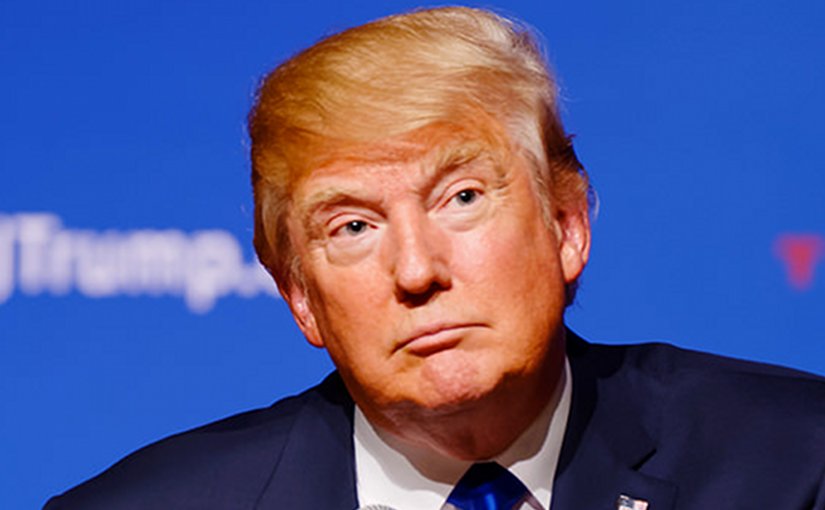 Trump’s latest TV ad says it all, even before you listen. The caption is: Paid for by Donald J Trump, Inc., Approved by Donald Trump. It’s almost as if he’s running his campaign as a send-up of the other hopefuls, beholden to lobbyists and the mainstream media. The only one with name recognition is Jeb Bush, and that, only because his brother was president (disastrously) eight years ago. Think of Trump as The Joker in the film "The Dark Knight” (2008): "I’m not a schemer. I try to show the schemers how pathetic their attempts to control things really are.”

He electrifies audiences, much as fascist scalawags Hitler or Mussolini did when Germans and Italians felt hopeless in the face of economic disaster. But where Nazism is defined as "a form of socialism featuring racism and expansionism”, Trump is no Nazi. It is precisely because he is not a Nazi (and hence easy game for the mainstream) that the US imperial elite are so incensed by him and his sudden, immense popularity. He is neither a socialist nor an expansionist. In as much as he has a coherent philosophy, it is libertarian and isolationist. He wants good relations with Russia, and cooperation on fighting al-Qaeda’s latest incarnation. "Russia wants to get rid of ISIS. We want to get rid of ISIS. Maybe let Russia do it. Let them get rid of ISIS. What the hell do we care?”

Alternative to the Bush-Obama project

In 2008, there suddenly emerged an equally unlikely ‘dark horse’, an elegant, articulate black candidate with vague promises to counter the Bush warmongering, and confront the outrageous crimes of the banking establishment. Obama’s slogans were "Change We Can Believe In” and the now painful "Yes We Can”, which inspired hope for … change. Despite his blank cheque to confront the bankers who had brought the US to the brink of ‘bank’ruptcy, he appointed those very Wall Street foxes to clean up the chicken coup, ended up slapping a few wrists, giving them trillions in bailouts, leaving the criminals with their billions and their casino capitalism in place. His promise of election financing reform turned into the opposite, as tax loopholes and PACs were embraced in his own election campaign.

Though having voted against the Iraq invasion in 2003–a brave move–Obama fritter away his one public rejection of militarism, and methodically carried out Bush’s agenda in Afghanistan. Both Afghanistan and Iraq are failed states, now Obama’s legacy as much as Bush’s, complete with a rag-tag caliphate in place in a large chunk of Iraq and Syria. Obama is actually promoting ISIS as a result of, yes, more imperial overreach.

The failure of the Bush-Obama neocon agenda starkly shows that US imperialism is no longer a viable New World Order option, that the only policy that makes sense is Trump’s isolationism combined with good relations with Russia. The war in Syria began, as did the western invasion of Libya, when Obama and Hollande said "Assad must go,” a blatant violation of both longstanding western respect for the nation state and Islamic jurisprudence. "Trump and Putin could return the concept of sovereignty to its privileged position. This would end many wars,” writes Israel Shamir. A neo-detente to oppose neo-imperialism.

Neo-detente with Russia undermines the US need for a foreign enemy to justify imperialist overreach. But the Cold War ‘Better dead than red’ lives on now in ‘If you are not with us, you are against us.’ Hillary, who supported Bush’s invasion of Iraq and hostility to Russia, carries on the tradition.

Trump appeals to both bigots and thinkers

What impresses all Americans about Trump is his lack of ties to the banking/ industrial/ Israel lobbyists. True, he loudly praises Israel and Netanyahu, but at the same time states politely that Israel must make compromises if it wants peace, putting him on the radar of Zionists, and preventing any breakthrough in the mainstream media. Unlike the Bushes, Trump has no use for Saudi Arabia. He has no fondness for bankers ("killers”) after his four bankruptcies. Trump argues his experience declaring bankruptcy is good preparation for what he may need to do in the White House.

This combined with a populist agenda emphasizing job creation–"Many of the great jobs that the people of our country want are long gone, shipped to other countries. We now are part time, sad! I WILL FIX!”–is a winning combination. But there are problems. His Mexican wall and ban on Muslims are clearly over the top, and are condemned by all but the bigots among his followers. But as one supporter told the New Yorker, "There are so many other things going on in this country that we’ve got to be concerned about. I’ve seen a lot of our friends lose their houses.”

Both proposals are unconstitutional and unworkable, more campaign rhetoric than substance. Trump’s promise to deport children born in America to illegal immigrant mothers is prohibited by the Constitution. Every undocumented immigrant would be entitled to a hearing and an appeal. Trump’s advisers should have told him that the Mexican wall is unnecessary in an era of total surveillance, and besides, there is a net out-migration of Mexicans now. The American Dream has soured, in case he hadn’t noticed.

As for Muslims, a ban on immigrants according to religion violates the first amendment. Trump’s emotional call came after the tragic shooting in San Bernardino, in which 14 people were killed by ISIS types. Hillary Clinton said that Trump’s rhetoric was the "best recruiter” for the Islamic State militant group. On Face the Nation, Trump dismissed Clinton’s jibe, and elsewhere has retorted to her that she is the proverbial pot calling the kettle black. "Clinton caused tremendous death with incompetent decisions” in the Middle East. "All this has led to ISIS.”

Comically Bush and Ted Cruz called for a similar ban (with no media outcry), only allowing Christian Syrian immigrants, but when asked how he could implement this, Bush shrugged and said, "You’re a Christian. I think you can prove it. If you can’t prove it, then, you know …”

Blacks generally resent Mexican immigrants for taking jobs which otherwise would go to blacks, and many admire Trump for his honesty. Only Latino Americans are staunchly anti-Trump. Trump’s gaffes have cost him millions, lost him many wavering supporters, not to mention his honorary doctorate from Robert Gordon University in Scotland. They could lose him the nomination, but he soldiers on fearlessly. He has admitted mistakes before. He could do it again.

He has an intriguing policy on taxes, claiming he wants to soak the rich, including himself. He proposed a 14% tax on the net worth of wealthy Americans. (It would increase his personal tax bill by $725 million.) He argues his one-time tax package would raise $5.7 trillion to erase the nation’s debt and save $200 billion in annual interest payments, saving Social Security and allowing a tax cut for the middle class.

Trump represents the new populist neo-neocon politics, already strong in France, Greece, Spain and elsewhere in Europe, and similarly denounced in the mainstream media there. But voters are no longer drinking the cool-aid.

A few months ago, it looked like Bush would take the nomination through inertia, but his lack of charisma, and the growing understanding that his brother’s reign was disastrous, have buried him. If Trump incredibly wins the nomination, there is talk (William Kristol and Bush) of organizing an independent candidate. If the establishment manages to bury Trump, there won’t be anyone of substance left, and Republicrat Clinton will coast to victory. Already Cheney and other neocons are looking to her as their dream candidate.

There is a third party waiting to be revived for such a program of radical, right wing change–the Reform Party, founded in 1995 after Ross Perot’s independent 1992 presidential campaign. It has nominated several notable candidates over the years, such as Perot himself, Pat Buchanan, and Ralph Nader. Jesse Ventura was elected on its ticket as governor of Minnesota in 1998. Trump would fit in quite easily if it comes to that.