In the 1930s, Russia (USSR) developed a rate significantly outstripping the rate of development of all other countries of the world. This situation did not suit the focus of the world's evil – the United States and certain international circles. 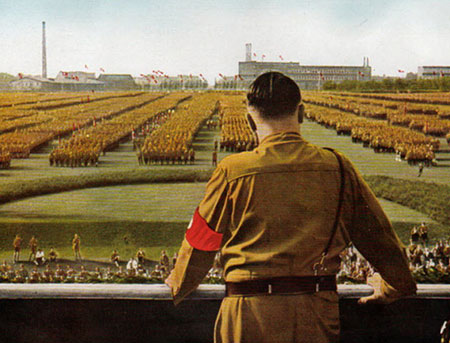 In the 1930s, Russia (USSR) developed a rate significantly outstripping the rate of development of all other countries of the world. This situation did not suit the focus of the world's evil – the United States and certain international circles.

Germany began to prepare for war with Russia, i.e. with the Soviet Union. And again the leadership of Germany was placed in a network that eventually ruined its people, acquiring world domination for the U.S. Yes, that's right. The Germans in the Second world war won world domination, without realizing it, not for himself but for U.S.

Since 1924 the German monopolists, with the active participation and assistance from the United States and England, hoped to use Germany as a shock force against the Soviet Union, by beginning the restoration of the military-industrial potential of Germany. The Versailles peace Treaty of 1919, prohibiting Germany from having armed forces, was forgotten.  After Germany lost the First world war of 1914-1918, only the lazy did not throw stones at the Germans. <

The Germans were laughed at, were humiliated, represented in the form of inferior beings. The Germans said they couldn't do anything and only knew how to start and lose a war. To the Germans it was a shame, but the First world war, which claimed 10 million lives, really untied and failed Germany, and the Germans were silent, suffered, conscious of their guilt. This continued for 15 years.

In 1933 the Nazi party (organized in 1919) came to power in Germany, led by Adolf Hitler (Schicklgruber). Hitler said: "The Germans, you are a great nation, in you flows the blue blood." After years of humiliations and insults the Germans they were called a great nation! The Germans promised the whole world, and almost all of Germany followed Hitler. It was designed by the warmongers.

The Germans had already begun to dream about Russian and Ukrainian lands. These statements and promises had brought the religious, mystical basis for substantiating the greatness of the German nation, the introduction of special rituals and paraphernalia, such as swastikas. At this time, the United States and England continued to hold investments in the German armaments industry, and we, the USSR, despite the measures taken, found it impossibly difficult to compete with Germany in production of weapons and number of soldiers and officers in the armed forces.

World war II was unleashed in 1939 for the U.S. achieve the following strategic objectives:

The coming to power of the Nazis contributed to the creation of the state of Israel.

The U.S. had to eliminate two powers, allowing the strength and power of America to set a world dictatorship and to live at the expense of other people's labor, other people's wealth. The elimination of Germany and the Soviet Union opened the path to world power to the US .

Germany was preparing to seize the Soviet Union and destroy  the Russian and other people living in its territory. The Germans were dreaming about our land, about the great huge Germany and wanted our death. Millions of Germans were ready to kill us all and take our lands and our property.

Liberal ideology, in which the supreme value is money (in socialist ideology it's the supreme value of man), brought the Germans and some other nations of Europe to the point that gangsterism has become the norm of their behaviour.