Volodymyr Chemerys, b 1962, is a founding member of the Ukrainian Helsinki Union, one of the first perestroika organizations in Ukraine advocating renaissance of national culture and independence. The Union is now a human rights advocacy group. Chemerys was a member of the Verkhovna Rada (parliament) of the second convocation (1994–1998), but he is mostly known as one of the informal leaders of the ‘Ukraine without Kuchma’ mass protest campaign of 2000-2001. He also took part in the legendary 1991 student protests in Kiev. Beginning from a conservative outlook, Chemerys has moved to the political left since the disappointment of the Yushchenko presidency

We have to admit: after winning ‘Euromaidan’, the human rights situation in Ukraine has deteriorated significantly. 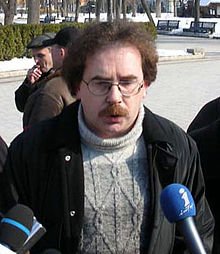 This trend became apparent already in 2014, evidenced by a number of laws approved during the post-Maidan wave. In particular, we are talking about the law allowing preventive detention of citizens for thirty days, despite the fact that under the Constitution a person may be detained only for 72 hours. Also, changes have been made to the Criminal Code to enable cases to open against a Ukrainian citizen for making critical comments about the military draft of citizens in the "Anti-Terrorist Operation zone”.

In 2015, this trend continued. A law was passed on "de-communization” which is in conflict with a number of fundamental rights and freedoms guaranteed by the European Convention for the Protection of Human Rights and Fundamental Freedoms. These include freedom of assembly and association (Article 11 of the Convention), freedom of expression (Article 10) and freedom of speech.

As a consequence, in Ukraine there are a large number of political prisoners. In this regard, it should be emphasized that the people usually referred to as "political prisoners” in our media are typically representatives of right-wing organizations, arrested for the murder of a renowned journalist or involved in the grenade explosion near the Verkhovna Rada last August–in other words, people who are accused of committing serious criminal offenses.

The real political prisoners are journalists such as Ruslan Kotsaba, arrested and charged in early 2015 for expressing his views on the Internet, or communists such as Alexander Bondarchuk, who was distributing newspapers and leaflets containing oppositional texts. These are just two examples of many more that could be cited. [See below: Appeal of Ukrainian political prisoner Ruslan Kotsaba to the deputies of the European Parliament, Dec 24, 2015.]

For these reasons, rallies against rising social service tariffs, the military draft or fascism, or rallies in favour of establishing civil peace, etc have been cancelled. On March 17, 2015 in Odessa, there was an attempt to organize a rally against tariff hikes in public transport, but the people who came out for it were surrounded by members of the right-wing groups, such as ‘Automaidan’ and ‘Oberig’ and only miraculously managed to avoid a serious clash.

And on January 19, the ultra-right disrupted a rally in Kyiv aimed to commemorate two Russian antifascists, the lawyers Stanislav Markelov and Anastasia Baburova who were killed in Russia in 2009.

It can be said that today in Ukraine, carrying out public actions advocating for social, political or economic rights is almost impossible. Actions in support of civil peace are immediately declared "separatist”. At the beginning of 2015 in Ukraine, there were large and frequent spontaneous demonstrations against military draft mobilizations. These were broad, grassroots initiatives by a dissatisfied population. But their organizers and participants have been hit with administrative penalties or, worse, have been tried in courts.

In general, it seems that the Parliament, the government and the president are able to offer the population nothing but usurious tariff increases, unemployment, anti-social reforms and further impoverishment. Dissatisfaction is increasingly punished by persecution. We are repeatedly told that that there is a war in our country, and the opposition should be imprisoned while "patriots” should be forgiven even for acts of murder because they kill so-called separatists. Never mind that members of the ‘Tornado’ and ‘Aidar’ battalions have tortured people – you must understand that they wanted to defend the rights and freedoms of Ukrainians!

Alas, this patriotic propaganda that dominates today in the Ukrainian society is, in fact, no different from the Russian variant. We have returned to the realities of the Soviet era, when it was impossible to freely express a point of view or watch this or that film. Ukraine has proscribed the Russian film ‘Irony of Fate’ and many other films. And the Institute of National Remembrance, a kind of ‘Ministry of Truth’, refused to give permission to register a newspaper called ‘Left March’ because the name is the same as the title of the well-known poem by the communist poet Vladimir Mayakovski.

So the human rights situation in Ukraine has deteriorated significantly and it is a real challenge for human rights activists to do their work. If similar thing had happened during the regimes of Yanukovych (2010-14), Yushchenko (2005-09) and Kuchma (1994-2005), all human rights activists would unanimously have said that systemic violations of civil rights are taking place. If during the time of President Yanukovych, a journalist were placed on trial, an opposition political party were banned– as today the Communist Party is banned, or opposition parties were prevented from participating in local election, it would certainly have provoked a huge outcry among Ukrainian human rights activists.

Unfortunately, today, the powerful voices of human rights defenders are practically silent. This is due, first of all, to the fact that talking about such things is potentially dangerous. Critical voices run the risk of being labeled "agents of the Kremlin” or "separatists” by both the authorities and the members of ultra-right organizations.

Despite all this, there are human rights activists in Ukraine who are speaking out in favour of human rights, even if they face threats and harassment for doing so. Of note among such people is Tatiana Montyan.[1]

As a rule in such a situation, the loudest voices of human rights defenders are international human rights organizations, most notably, Human Rights Watch and Amnesty International. But in the case of the latter, its statements criticizing the Ukrainian government are coming mostly from the organization’s headquarters in London while its Ukrainian division maintains a certain politesse.

The Helsinki Union and Amnesty International in Ukraine issued statements in support of the aforementioned Ruslan Kotsaba. However, in comments to the published texts of the group, one reads many allegations that human rights defenders have "sold themselves to Putin” and so on, while in fact the same organizations – from Human Rights Watch and Amnesty International to the Organisation for Security and Cooperation in Europe –constantly report on systematic violations of civil rights in Russia, just the same as in Ukraine.

One cannot remain silent about what is going on now in our country.