Russia said on Thursday it had serious grounds to suspect Turkey was preparing a military incursion in Syria as a Syrian army source said the city of Aleppo would soon be encircled by government forces that are advancing with Russian air support.

Russia said on Thursday it had serious grounds to suspect Turkey was preparing a military incursion in Syria as a Syrian army source said the city of Aleppo would soon be encircled by government forces that are advancing with Russian air support. 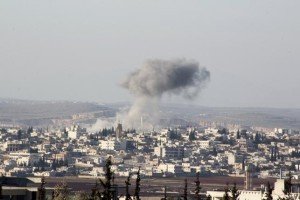 Turkey, which has backed the Syrian rebellion, meanwhile called for the United States to take a more decisive stance against Russia over its intervention in Syria, and said there was no point to peace talks while Russia carried out attacks.

The United Nations on Wednesday suspended the first peace talks in two years, halting an effort that seemed doomed from the start as the war raged unabated on the ground and government forces severed a major rebel supply route into strategically-important Aleppo, Syria’s biggest city before the war began.

From RT.com’s live updates from Geneva, Feb 4, 2016: According to UN special envoy for Syria, Staffan de Mistura, the Syria talks in Geneva have been "temporarily halted” until February 25. RT explains that "procedural matters” have interfered with the negotiations, according to the UN special envoy.

The refugee crisis created by the five-year-long war moved back into focus as donors convened in London on Thursday, with countries pledging billions of dollars in aid to help the victims of a conflict that has forced millions from their homes.

Turkey said at the conference up to 70,000 refugees from Aleppo were moving toward the border due to air strikes. Rebels, meanwhile, said they hoped the failure of peace talks would encourage their foreign sponsors to send them better weapons. 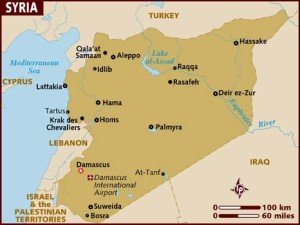 Four months of Russian air strikes have tipped the momentum Assad’s way after rebel advances earlier in 2015 that posed a growing threat to his control of crucial areas of western Syria. With the help of Russian air power and allies including Lebanon’s Hezbollah and Iranian fighters on the ground, the Syrian army is regaining areas on key fronts in the west, where Syria’s most important cities are located.

But swathes of the country are in the hands of armed rebels, including Islamic State in the east, Kurdish militia in the north, and a mosaic of groups in the west who have been the target of many of the Russian air strikes.

Any Turkish incursion would be a major escalation in a war that has already drawn in neighboring, regional and international governments, and would risk direct confrontation between Russia and a NATO member.

Russia’s defense ministry said it had registered "a growing number of signs of hidden preparation of the Turkish Armed Forces for active actions on the territory of Syria”. There was no immediate comment from Turkey.

Relations between Russia and Turkey, already strained by the Syria crisis, have deteriorated badly since Turkey shot down a Russian warplane near the Syrian border in November.

Turkish Prime Minister Ahmet Davutoglu said that after each discussion held between Washington and Moscow, Russia carried out even more attacks.

Aleppo, just 50 km (30 miles) south of the Turkish border, is a major strategic prize in the war and is currently divided into areas of government and opposition control. Many of the rebels fighting in and around Aleppo have close ties to Turkey.

Since the start of Russia’s bombing campaign on Sept. 30, the Syrian army and its allies have launched major offensives to the south of Aleppo against rebels, and to the east against Islamic State. This week, three days of intensive Russian bombing helped the army and allied fighters to severe a major supply line to the northwest of the city, in the process reaching for the first time in three and one half years two Shi’ite towns loyal to the government.

The army source said operations to fully encircle Aleppo from the west would happen soon.

A senior, non-Syrian security source close to Damascus said Iranian fighters had played a crucial role in the latest breakthrough. "Qassem Soleimani is there in the same area,” said the source, referring to the head of the Iranian Revolutionary Guards’ elite Quds force responsible for overseas operations.

Residents thanked Assad, Iran and Hezbollah in celebratory scenes from the Shi’ite towns of Nubul and al-Zahraa broadcast by Hezbollah’s al-Manar TV.

The powerful Kurdish YPG militia, which controls wide areas of northern Syria, meanwhile added to the pressure on insurgents, capturing two villages near Nubul and al-Zahraa, the Syrian Observatory for Human Rights reported.

The Syrian Kurds have consistently denied opposition claims that they cooperate with Damascus.

"I think the special envoy decided to suspend the talks because the organization did not want to be associated with the Russian escalation in Syria, which risks undermining the talks completely,” a U.N. official told Reuters.

The foreign minister of Iran meanwhile called for the talks to resume and for an immediate ceasefire, while Russia said it would spare no effort to ensure the pause in the peace talks was as short as possible.

U.S. Secretary of State John Kerry said his Russian counterpart Sergei Lavrov had agreed on the need to discuss how to implement a ceasefire in Syria during a call on Thursday.

While the Syrian opposition has received U.S. aid during the conflict – including military support to vetted rebel factions – Assad’s opponents have been heavily critical of U.S. policy in recent weeks, accusing Washington of giving way to Russia.

Rebel commanders said they hoped the peace talks’ collapse would convince their foreign backers, including Saudi Arabia, that it was time to send them more powerful and advanced weapons, including anti-aircraft missiles.

Assad’s foreign opponents have been funneling weapons to vetted rebel groups via both Turkey and Jordan.

One rebel leader said he expected "something new God willing” after the failure of the Geneva talks. Another rebel commander said: "They are promising to continue the support. In what form, I don’t yet know … How it will crystallize, nobody knows … We need to wait.” Both spoke on condition of anonymity citing the sensitivity of the issue.

While vetted "Free Syrian Army” rebels have received weapons including U.S.-made guided anti-tank missiles, their calls for anti-aircraft missiles have gone unanswered, mostly because of fears they could end up in the hands of powerful jihadist groups such as the Nusra Front that are also fighting Assad.

A Russian defense ministry spokesman said a Russian military trainer was killed in a mortar attack.

The defense ministry said the mortar attack took place on Feb. 1. "They (Russian military servicemen) are not taking part in ground operations,” Kremlin spokesman Dmitry Peskov told reporters. "We are talking about advisers. This is linked to teaching Syrian colleagues to operate equipment which is being delivered to Syria under existing contracts.”