With country at risk of becoming a failed state, Kiev must recognise that economic survival depends on Moscow not the west

In January, Ukraine’s president, Petro Poroshenko, congratulated the country on surviving its first winter without buying Russian gas. It had instead bought European gas which, as Poroshenko pointed out proudly, was 30% more expensive. 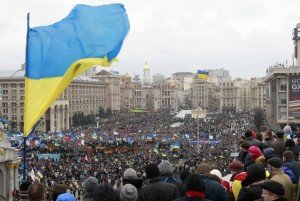 This sums up the core problem facing the Ukrainian economy. It is not corruption, a serious issue about which little can be done in the short term, but the ideologically driven choice to sever all ties with Russia, the country that has historically been its major trading partner and chief investor.

In little over a year, living standards inUkraine have fallen by half, the currency has lost 350% of its value, and inflation has skyrocketed to 43%. Yet, even as the economy has collapsed, the government has insisted on economic policies that can only be termed suicidal.

By tearing up contracts with Russia in 2014, Ukraine’s defence and aviation industries lost 80% of their income. Once the pride of Kiev, airline manufacturer Antonov went bankprupt and rocket engine producer Yuzhmash is now working just one day a week. 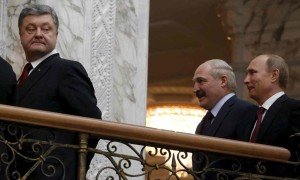 (L to R) Presidents of Ukraine, Belarus and Russia at Minsk-2 ceasefire talks in Belarus in February 2015 (Grigory Dukor, Reuters)

By severing banking ties with Moscow, Kiev has denied itself investment and a vital economic lifeline – the remittances sent back home by zarobitchane, Ukraine’s migrant workers. Up to seven millionUkrainians work in Russia, sending back $9bn in 2014 – three times the totalforeign direct investment Ukraine got last year.

Reckless government borrowing has exacerbated the problem. The government was able to write off 20% of its Eurobond debt last October, allowing it to negotiate for the next IMF loan tranche which was expected in December but still not been received.

But the draconian terms imposed for this small beer are often overlooked. Ukraine will be repaying this debt until 2041, with future generations giving western creditors as much as half of the country’s GDP growth, should it ever reach 4% a year.

There is a common thread that links the government’s irrational economic behavior – the understandable desire to spite Vladimir Putin. Alas, it is the average Ukrainian citizen who pays the price.

There can also be no doubt that Poroshenko approves of this approach. In his first speech of 2016 he announced new priorities for the Ukrainian economy. The government intends to end subsidies to manufacturing and industry, and instead promote investment in information technologies and agriculture.

It is not at all clear, however, where he will sell this produce, since by signing a free trade agreement with the EU, Ukraine lost its preferential access to its largest market, Russia.

Meanwhile, EU certification allows only 72 Ukrainian companies to export goods to the EU. Of these, 39 licenses are for honey. While that may sound like a lot of honey, Ukraineexported its yearly quota for honey in the first six weeks of 2016.

Nor is it clear how Poroshenko plans to make Ukrainian agriculture globally competitive when, as his own agriculture minister points out, four out of five agricultural companies are bankrupt. It is also unclear who will pay for agricultural machinery, 80% of which is imported.

Such policies have led to a steady erosion of government popularity, with 70% of Ukrainians saying the country is on wrong track and 85% say they do not trust the prime minister. Poroshenko’s popularity is now lower than that of his predecessor, Viktor Yanukovich, on the eve of the Maidan rebellion that ousted him.

But while less than 2% describe the country as "stable,” a new revolt does not seem imminent. So far, the regime has been able to provide explanations that deflect attention away from its own role in Ukraine’s economic demise.

The first is Russia’s annexation of Crimea and the rebellion in the east, which are commonly cited as reasons for the fall in GDP. While it’s true that these caused significant economic damage, it has been exacerbated by the government’s own policies which, despite insisting Russophone eastern regions are part of Ukraine, has cut them off from economic ties and punished the population for siding with Russia.

Another favourite argument of the current government is that Ukraine simply has no choice but to respond to Russian aggression by imposing its own sanctions. The beauty of this argument is that, while it may not make economic sense, it makes a great deal of political sense for those now in power.

The destruction of Ukraine’s industrial base, which is heavily concentrated in the east, shifts the balance of economic and political power to the western regions, permanently marginalising opposing political voices. The advantages are clear. Fostering a sense of perpetual crisis allows the current government to argue that it must remain in power, to see its policies through. The only uncertainty is whether such a strategy can bear fruit before the country’s economy collapses.

This is not a policy that the west can endorse. Regardless of political sympathies, no western government should tolerate the deliberate impoverishment of the population for political gain. The risks of Ukraine becoming a failed state, and adding millions more to Europe’s burgeoning refugee crisis, are simply too high.

The best way to avoid such an outcome is to recognise that Ukraine’s economic survival depends not on western bailouts but on the renewal of Russian investment there. Western policymakers should insist that economic rationality take precedence over economic nationalism, and make that a condition of assistance.

Until that happens, it is hard to imagine anyone investing in Ukraine’s future, including its own people.