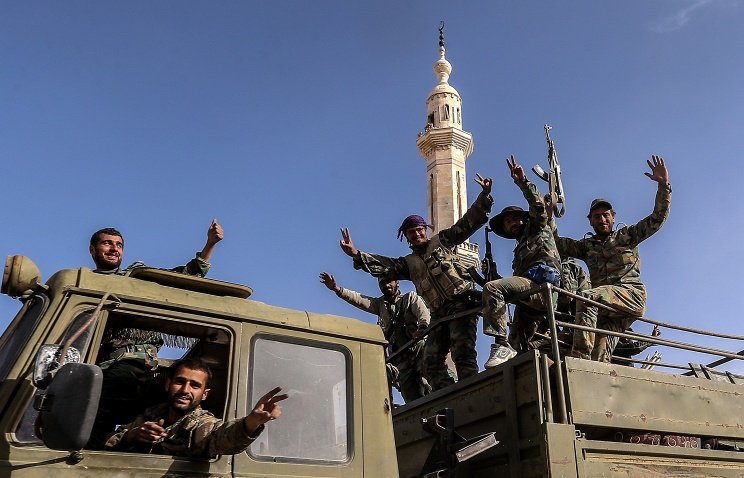 MOSCOW – The liberation of Palmyra proves that Syria’s government army has snatched strategic initiative in the anti-terrorist efforts and Russia has made its contribution to this victory, the Russian Foreign Ministry said on Monday.

"The victory over Islamic State terrorists who seized the city in May 2015 is a big success of the Syrian army. Russia has made its contribution to it. It continues its assistance to Syria, including through delivering pinpoint air strikes against terrorist groups,” the ministry said.

"The liberation of Palmyra has demonstrated that the Syrian army has managed to reach a turning point and take strategic initiative. We will continue our assistance to the Syrians bearing in mind that only the Syrians can and must resolve the task of complete liberation of their land from extremists and terrorists.”

The ministry noted that the success of the Syrian army opens way to a political settlement in Syria, without which long-term stabilization in the country is impossible.

"We assume that military success in anti-terrorist fight opens real prospects for achieving political settlement of the Syrian crisis, without which long-term normalization in Syria is impossible,” the ministry said.

"We expect that the Syrian sides representing the Syrian government and a broad spectrum of opposition groups, including the Kurds, will manage to get straight at negotiations in Geneva under the UN aegis an efficient search for national consensus on the basis of Resolution 2254 of the UN Security Council, the Geneva communique of June 30, 2012 and decisions of the International Syria Support Group,” the ministry said.

The ancient city of Palmyra, a UNESCO world heritage site, was liberated on March 27 from terrorists by the Syrian government army and self-defense forces with support from the Russian air group.

Palmyra, an ancient city in Syria’s Homs province some 210 kilometers from Damascus, was seized by gunmen of the Islamic State (a terrorist organization outlawed in Russia) in early summer 2015. The Syrian authorities said back then that Palmyra with its monumental ruins of a great city that was one of the most important cultural centres of the ancient world standing at the crossroads of several civilizations, could share the fate of Iraq’s ancient cities of Assur, Nimrud and Hatra that were destroyed by Islamic State militants.

"Located in central Syria near oil and gas fields, Palmyra has a big strategic importance too,” the Russian foreign ministry noted.