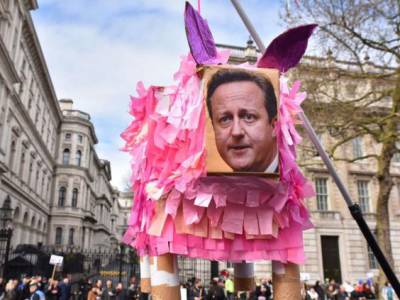 Cameron may very well be forced out. It is conceivable he would lose a vote of confidence in the House

If Cameron is forced out, Brexit becomes a real possibility

You may not have noticed it, but Cameron is on the skids.  His every attempt to extricate himself from the Panama Papers scandal leads to still greater feasting by the print media and anger among the public.   After having screwed up entirely in his handling of his father's offshore company and the 30,000 pounds in shares that he sold just before becoming PM, first trying to hunker down and say nothing, then finally coming clean to jeers of demonstrators at his door, he has just become the first PM to reveal his tax filings of the past several years.   And all to no avail. Transparency has only highlighted his wealth, which a large part of the British electorate is allergic to (rhymes with anti-bankers, anti-Semitism, all the good things, the very opposite of Americans' awe before wealth).

Moreover, now the attacks are on the 200,000 pounds in gift money he received from his mother in 2011, the year his father died.  That was all completely legal. It was motivated by her wish to even the inheritance, since Cameron's older brother got the family house.  And it took advantage of the British law making such gifts (inheritance) tax free if the donor lives for 7 years after the gift. (we have a very similar law in Belgium, so I am well familiar with the issues - which come to using tax avoidance as a social lever to see to the redistribution of family wealth when it can do some good, i.e. when the children are relatively young, instead of waiting till the geezers die.)

So now Cameron is being denounced for avoiding a potential 80.000 pound inheritance tax by the completely legal and even praiseworthy device used by his mother.

All of the key points for the foregoing are in today's and yesterday's Guardian, not in RT.  The reporting is not driven by any particular bias with respect to Russia, though Russia will be one of the biggest beneficiaries of Cameron’s travails.

Bottom line:  Cameron may very well be forced out.  It is conceivable he would lose a vote of confidence in the House.  Why? Surely not because he did anything wrong on his personal finances.  But because Labour and his own backbenchers smell blood. And he has lost half of his own party to Leave - the half which greatly resents his forceful position for Stay In on the Brexit referendum in June.

Moreover, there is a credible successor all lined up:   Boris Johnson of the Leave campaign, who otherwise is not standing for reelection as London's mayor.

Why does all this matter?   Because without Cameron the Stay In campaign is doomed.  Because Britain's leaving the EU stops Brussels in its tracks, including its mad policies in the East.  Because the level of probability of this happening is probably higher than Trump's becoming the Republican candidate, not to mention his getting elected as president. And there is not a blessed thing the U.S. Government can do about it.

So, despite my recent gloominess about its relevance, Europe may pull our chestnuts out of the fire after all.