Exclusive: As the West is sucked deeper into the Syrian conflict and starts a new Cold War with Russia, the mainstream news media has collapsed as a vehicle for reliable information, creating a danger for the world, writes Robert Parry.

Does any intelligent person look at a New York Times article about Russia or Vladimir Putin these days and expect to read an objective, balanced account? Or will it be laced with a predictable blend of contempt and ridicule? And is it any different at The Washington Post, NPR, MSNBC, CNN or almost any mainstream U.S. news outlet?

And it’s not just Russia. The same trend holds true for Iran, Syria, Venezuela, Nicaragua and other countries and movements that have fallen onto the U.S. government’s "enemies list.” We saw the same pattern with Saddam Hussein and Iraq before the 2003 U.S. invasion; with Muammar Gaddafi and Libya before the U.S.-orchestrated bombing campaign in 2011; and with President Viktor Yanukovych and Ukraine before the U.S.-backed coup in 2014.

That is not to say that these countries and leaders don’t deserve criticism; they do. But the proper role of the press corps – at least as I was taught during my early years at The Associated Press – was to treat all evidence objectively and all sides fairly. Just because you might not like someone doesn’t mean your feelings should show through or the facts should be forced through a prism of bias.

In those "old days,” that sort of behavior was deemed unprofessional and you would expect a senior editor to come down hard on you. Now, however, it seems that you’d only get punished if you quoted some dissident or allowed such a person onto an op-ed page or a talk show, someone who didn’t share Official Washington’s "group think” about the "enemy.” Deviation from "group think” has become the real disqualifier.

Yet, this conformity should be shocking and unacceptable in a country that prides itself on freedom of thought and speech. Indeed, much of the criticism of "enemy” states is that they supposedly practice various forms of censorship and permit only regime-friendly propaganda to reach the public.

But when was the last time you heard anyone in the U.S. mainstream say anything positive or even nuanced about Russian President Putin. He can only be portrayed as some shirtless buffoon or the devil incarnate. Former Secretary of State Hillary Clinton got widespread praise in 2014 when she likened him to Hitler.

Or when has anyone in the U.S. media been allowed to suggest that Syria’s President Bashar al-Assad and his supporters might actually have reason to fear what the U.S. press lovingly calls the "moderate” rebels – though they often operate under the military command of Sunni extremist groups, such as Al Qaeda’s Nusra Front. [See Consortiumnews.com’s "Obama’s ‘Moderate’ Syrian Deception."]

For the first three years of the Syrian civil war, the only permissible U.S. narrative was how the brutal Assad was slaughtering peaceful "moderates,” even though Defense Intelligence Agency analysts and other insiders had long been warning about the involvement of violent jihadists in the movement from the uprising’s beginning in 2011.

But that story was kept from the American people until the Islamic State started chopping off the heads of Western hostages in 2014 – and since then, the mainstream U.S. media has only reported the fuller story in a half-hearted and garbled way. [See Consortiumnews.com’s "Hidden Origins of Syria’s Civil War.” ]

The reason for this conformity among journalists is simple: If you repeat the conventional wisdom, you might find yourself with a lucrative gig as a big-shot foreign correspondent, a regular TV talking head, or a "visiting scholar” at a major think tank. However, if you don’t say what’s expected, your career prospects aren’t very bright.

If you somehow were to find yourself in a mainstream setting and even mildly challenged the "group think,” you should expect to be denounced as a fill-in-the-blank "apologist” or "stooge.” A well-paid avatar of the conventional wisdom might even accuse you of being on the payroll of the despised leader. And, you wouldn’t likely get invited back.

But the West’s demonization of foreign "enemies” is not only an affront to free speech and meaningful democracy, it is also dangerous because it empowers unscrupulous American and European leaders to undertake violent and ill-considered actions that get lots of people killed and that spread hatred against the West.

The most obvious recent example was the Iraq War, which was justified by a barrage of false and misleading claims about Iraq which were mostly swallowed whole by a passive and complicit Western press corps.

Key to that disaster was the demonization of Saddam Hussein, who was subjected to such unrelenting propaganda that almost no one dared question the baseless charges hurled at him about hiding WMD and collaborating with Al Qaeda. To do so would have made you a "Saddam apologist” or worse.

The few who did dare raise their voices faced accusations of treason or were subjected to character assassination. Yet, even after their skepticism was vindicated as the pre-invasion accusations collapsed, there was very little reappraisal. Most of the skeptics remained marginalized and virtually everyone who got the WMD story wrong escaped accountability. 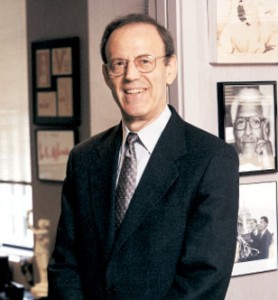 Carl Gershman, president of the National Endowment for Democracy.

An example of how Hiatt and the Post continue to play the same role as neocon propagandists was on display last year in an editorial condemning Putin’s government for shutting down Russian activities of the U.S.-funded National Endowment for Democracy and requiring foreign-funded groups seeking to influence Russian politics to register as foreign agents.

In the Post’s editorial and a companion op-ed by NED President Carl Gershman, you were led to believe that Putin was delusional, paranoid and "power mad” in his concern that outside money funneled into non-governmental organizations was a threat to Russian sovereignty.

However, the Post and Gershman left out a few salient facts, such as the fact that NED is funded by the U.S. government and was the brainchild of Ronald Reagan’s CIA Director William J. Casey in 1983 to partially replace the CIA’s historic role in creating propaganda and political fronts inside targeted nations.

Also missing was the fact that Gershman himself announced in another Post op-ed that he saw Ukraine, prior to the 2014 coup, as "the biggest prize” and a steppingstone toward achieving Putin’s ouster in Russia. The Post also forgot to mention that the Russian law about "foreign agents” was modeled after a U.S. statute entitled the Foreign Agent Registration Act. [See Consortiumnews.com’s "Why Russia Shut Down NED Fronts.”]

All those points would have given the Post’s readers a fuller and fairer understanding of why Putin and Russia acted as they did, but that would have messed up the desired propaganda narrative seeking to demonize Putin. The goal was not to inform the American people but to manipulate them into a new Cold War hostility toward Russia.

We’ve seen a similar pattern with the U.S. government’s "information warfare” around high-profile incidents. In the "old days’ – at least when I arrived in Washington in the late 1970s – there was much more skepticism among journalists about the official line from the White House or State Department. Indeed, it was a point of pride among journalists not to simply accept whatever the spokesmen or officials were saying, but to check it out.

There was plenty of enough evidence – from the Tonkin Gulf lies to the Watergate cover-up – to justify a critical examination of government claims. But that tradition has been lost, too. Despite the costly deceptions before the Iraq War, the Times, the Post and other mainstream outlets simply accept whatever accusations the U.S. government hurls against "enemies.” Beyond the gullibility, there is even hostility toward those of us who insist on seeing real evidence.

Examples of this continuing pattern include the acceptance of the U.S. government line on the sarin gas attack outside Damascus, Syria, on Aug. 21, 2013, and the shoot-down of Malaysia Airlines Flight 17 over eastern Ukraine on July 17, 2014. The first was blamed on Syria’s Assad and the second on Russia’s Putin – quite convenient even though U.S. officials refused to present any solid evidence to support their claims.

In both cases, there were obvious reasons to doubt the Official Story. Assad had just invited United Nations inspectors in to examine what he claimed were rebel chemical attacks, so why would he pick that time to launch a sarin attack just miles from where the inspectors were staying? Putin was trying to maintain a low profile for Russian support to Ukrainians resisting the U.S.-backed coup, but provision of a large, sophisticated and powerful anti-aircraft battery lumbering around eastern Ukraine would just have invited detection.

A photograph of a Russian BUK missile system that U.S. Ambassador to Ukraine Geoffrey Pyatt published on Twitter in support of a claim about Russia placing BUK missiles in eastern Ukraine, except that the image appears to be an AP photo taken at an air show near Moscow two years earlier.

Further, in both cases, there was dissent among U.S. intelligence analysts, some of whom objected at least to the rushes to judgment and offered different explanations for the incidents, pointing the blame in other possible directions. The dissent caused the Obama administration to resort to a new concoction called a "Government Assessment” – essentially a propaganda document – rather than a classic "Intelligence Assessment,” which would express the consensus views of the 16 intelligence agencies and include areas of disagreement.

So, there were plenty of reasons for Washington journalists to smell a rat or at least insist upon hard evidence to make the case against Assad and Putin. Instead, given the demonized views of Assad and Putin, mainstream journalists unanimously fell in line behind the Official Story. They even ignored or buried evidence that undermined the government’s tales.

Regarding the Syrian case, there was little interest in the scientific discovery that the one sarin-laden rocket (recovered by the U.N.) had a range of only about two kilometers (destroying Washington’s claims about the Syrian government firing many rockets from eight or nine kilometers away). [See Consortiumnews.com’s "Was Turkey Behind Syria-Sarin Attack?”]

Regarding the MH-17 case, a blind eye was turned to a Dutch intelligence report that concluded that there were several operational Buk anti-aircraft missile batteries in eastern Ukraine but they were all under the control of the Ukrainian military and that the rebels had no weapon that could reach the 33,000-foot altitude where MH-17 was flying. [See Consortiumnews.com’s "The Ever-Curiouser MH-17 Case.”]

Though both those cases remain open and one cannot rule out new evidence emerging that bolsters the U.S. government’s version of events, the fact that there are substantive reasons to doubt the Official Story should be reflected in how the mainstream Western media deals with these two sensitive issues, but the inconvenient facts are instead brushed aside or ignored (much as happened with Iraq’s WMD).

In short, there has been a system-wide collapse of the Western news media as a professional entity in dealing with foreign crises. So, as the world plunges deeper into crises inside Syria and on Russia’s border, the West’s citizens are going in almost blind without the eyes and ears of independent journalists on the ground and with major news outlets delivering incessant propaganda from Washington and other capitals.

Instead of facts, the West’s mainstream media trafficks in demonization.