Graham E. Fuller is a former senior CIA official, author of numerous books on the Muslim World; his latest book is Breaking Faith: A novel of espionage and an American’s crisis of conscience in Pakistan. (Amazon, Kindle) grahamefuller.com

Most Americans unfailingly believe NATO generously serves the European Union’s interests. Yet many Europeans don’t see it that way. They fear that NATO actually undermines a balanced Europe. Is it NATO with the E.U.? Or NATO versus the E.U.?

The two organizations were created by different groups of states (albeit with significant crossover) for differing purposes and with differing goals; indeed, some might say partially incompatible goals. 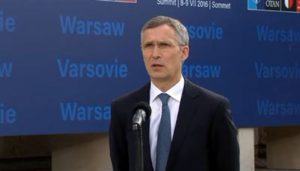 The E.U. vision was to bring European peoples, states and countries — at bloody war among themselves for long centuries — to renounce war as an instrument to solve European problems, to find common cause, and to cooperate in a common economic endeavor. It is an exceptional aim — the first time in human history when multiple states have freely yielded up significant elements of national sovereignty in order to partake in a common project.

Yet the U.S. has always felt geopolitical ambivalence towards the E.U. Washington in principle applauded the ideal — a unified, peaceful and prosperous continent. But it also understood that the formation of the E.U. created a new counterweight that could hinder American ability to dominate politics on the European continent. For America, it was NATO that was a far more congenial and useful mechanism than the E.U.

With the fall of the USSR, President George H.W. Bush (not "W”) gave verbal assurances to Russia that the West would not seek to capitalize on the Soviet collapse. With Russia’s astonishing acquiescence to the reunification of Germany, the U.S. gave assurances that there would be no NATO expansionism into former Soviet East Bloc states.

Needless to say, that promise was violated, and continues to be violated as neoconservative zealots in Washington seek to scoop up every small state on the Russian periphery and enlist them in the anti-Russian NATO cause (including Georgia, or the Ukraine, or Kyrgyzstan, or even Montenegro.)

The peaceful collapse of the Soviet Bloc in 1991 also posed a difficult question: what would be the rationale for NATO’s continued existence? All organizations seek to perpetuate their own existence and NATO became almost desperate for a new mission — a new enemy. Washington was loath to yield up its key instrument of control in European politics.

But how much do European geopolitical goals mesh with American ones? This too depends on one’s geopolitical vision of the world. For Europe, war among its members is virtually unthinkable. But Washington and NATO have a vested interest in maintaining a Russian threat as the centerpiece of E.U. geopolitics.

The E.U. has far less desire for confrontation or gratuitous demonization of Moscow. It sees little benefit and much potential harm in it. Germany in particular, given its history, geopolitical vision, and location, certainly seeks a modus vivendi with Russia. Is such a modus vivendi against U.S. interests?

Many Europeans remain highly ambivalent about whether it is NATO, or the E.U., that better represents their own geopolitical concerns. NATO is at heart an American institution, the E.U. is not.  Indeed any real back-door influence the U.S. had in the E.U. came from the ever-loyal United Kingdom (which is why Brexit is such a disaster for the U.S. in Europe.)

And of course there are a number of small insecure neighbors living next to the Russian bear who will eternally champion U.S. intervention. Life next to any great power is never easy. But herding such states into the U.S. column is an unwise foreign policy strategy.

For Washington, even as the E.U.’s future falls into question, NATO is seen as the default, near-surrogate organization for keeping Europe together in some fashion. It can serve as both an instrument against Russia, or as an arm of U.S. global military outreach under the "multilateral cover” of NATO.

Washington is uncomfortable in watching the E.U., as an economic and political organization, work closely with Russia. Indeed Germany, given its location, history and power, will be the quintessential European interlocutor with Russia — and thus most likely the major voice of reason and balance in East-West relations.

Germany, more than any other European power, will also bear the brunt of any potential hostilities with Russia. That is why the German foreign minister himself made cautionary comments a few weeks ago that NATO’s largest ever military exercises off Poland since 1991 constituted provocative saber-rattling towards Russia.

In this sense, then, Washington’s geopolitical agenda has in fact served to undermine the E.U. Washington strongly urged the immediate inclusion of as many former states of the East Bloc as possible in the E.U., seeking to glue them into a hopefully more anti-Russian Western "bloc.”

Assistant Secretary of State for European Affairs Victoria Nuland, who pushed for the Ukraine coup and helped pick the post-coup leaders.

But many European leaders had serious and sensible doubts about the appropriateness of E.U. membership for most of these states — and not on geopolitical grounds. Many lacked any democratic tradition, had disastrous economies, suffered serious corruption, bad governance, and were economic basket cases.

To encourage their economic development is one thing; indeed Russia acknowledges that it too can benefit from E.U. presence around Russia, as long as the E.U. was seen as an economic project and not a strategic security one.

The upshot of U.S. pressures was that E.U. membership expanded far too rapidly and prematurely; stringent conditions for admission to the E.U. were often softened in favor of American geopolitical goals.

And now, not surprisingly, many of these states now struggle to meet E.U. criteria; they import into Europe neo-fascist views, represent a net drain on the E.U., and often have little interest in adopting E.U. social and democratic values. For them war with Russia is actually quite thinkable. Especially after suffering under half a century of disastrous Soviet rule.

The E.U., sadly, could still conceivably collapse as a project. If so, it will not be because of Brexit as such. One key reason will be because E.U. expansion brought too many diverse states into a complex union arrangement. After all, even parts of the early E.U. "south” — Greece, Portugal or Spain, are still struggling to make it under E.U. rules. (And indeed, E.U. rules may need to be re-jiggered in the face of lessons-learned.)

The hard question must be posed about whether Washington itself has not been pursuing a highly confrontational and aggressive set of policies against Moscow. In this context there is an important place for an independent European geopolitical, strategic and security policy.

Russian President Vladimir Putin laying a wreath at Russia’s Tomb of the Unknown Soldier on May 8, 2014, as part of the observance of the World War II Victory over Germany.

Europe, however, approaches these issues very differently from Washington. Russia, as a significant (and bruised) great power, is still trying to find its place in the new post-Soviet geopolitical space. Russia needs to be tightly bound into diplomatic and organizational ties with the E.U. Indeed it seeks to be a partner in discussion of common legitimate issues of stability and economics in Eastern Europe.

Putin shows signs of great willingness to do so because Russia too can gain economically. Russia is not operating as a spoiler unless the E.U. adopts a hostile position towards Moscow.

Aggressive military posturing by NATO ("maintaining NATO credibility”) is not the way to go about creating a new European space.

Europe is basically quite capable of defending itself given its wealthy economies and technical know-how that even extends to weapons production. Europe does not need to be chivied up by Washington to develop a more "robust posture” towards Russia. It is Europe’s own future and they need to chart it themselves. The U.S. cannot operate as the anxious helicopter parent ready to intervene over European foreign policies.

Now, there is quite legitimate room for serious discussion about what Russia’s policies and intentions are towards Europe. But it must include serious and frank discussion of cause-and-effect in East-West tensions.

How much did talk of bringing Ukraine into NATO — taking with it what has for centuries been Russia’s sole warm water port in the Black Sea — spark Putin’s decision not to allow this naval and shipping base of extreme importance from being ceded to NATO? How would the U.S. react to threatened loss of its south-eastern ports to a hostile foreign power (or even the Panama Canal)? 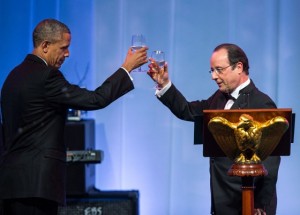 President Barack Obama raises his glass in a toast with President Francois Hollande of France during the State Dinner at the White House, Feb. 11, 2014. (Official White House Photo by Amanda Lucidon)

How much did these unwise policies towards Ukraine, and the Western-sponsored coup against the elected (but incompetent) government of Ukraine, help trigger Putin’s response in destabilizing eastern Ukraine? Such issues require honest analysis.

Yet such searching and objective analysis of the sources of recent NATO-Russian confrontation is shockingly absent in most "responsible” media in the U.S., including in the persistently biased New York Times coverage of all things Russian.

How independent does Europe and the E.U. wish to be? How much is it willing to be dragged into the U.S. global strategic agenda with Washington’ preponderantly military approach to global issues?

Remarkably French President Francois Hollande remarked upon arriving at the just-completed NATO conference in Warsaw, Poland, "NATO has no role at all to be saying what Europe’s relations with Russia should be. For France, Russia is not an adversary, not a threat.”

It may well be time for the E.U. to consider again its own independent military force — a project to which the U.S. could contribute, but not control.

Is it not then legitimate to ask: aren’t we really talking about NATO versus the E.U. in this new strategic era?