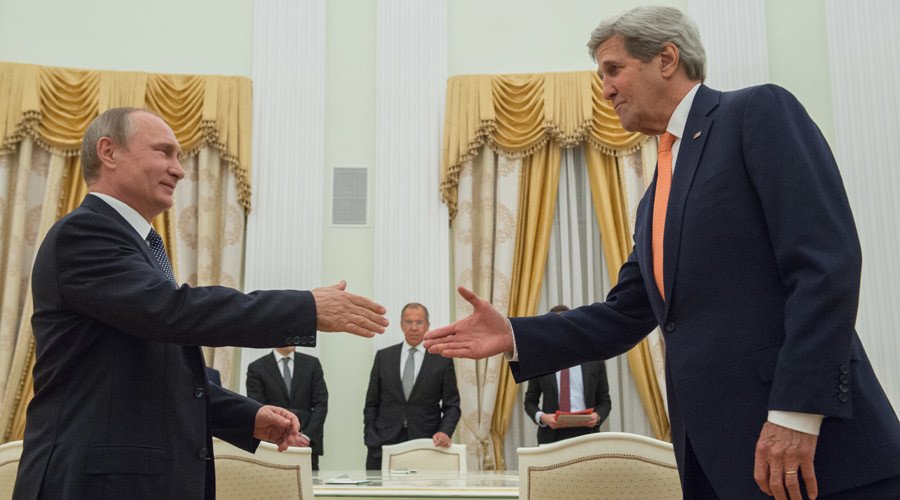 Kerry sits down for Syria talks with Putin in Moscow 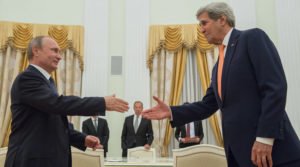 Armed with new proposals for joint action to solve the Syria crisis, U.S. Secretary of State John Kerry sat down for talks with Vladimir Putin lasting into the night during a two-day visit to Moscow.

"Our last conversation with President Obama convinces me that we are not just developing cooperation, but doing so with the aim of achieving tangible results,” said the Russian president, after receiving Kerry at the Kremlin, during a welcoming photo opportunity. Putin called his U.S. counterpart last week, partly to discuss Syria. "I send the President my best wishes, and hope that you can report that we have moved forward on our issues, as a result of these talks,” he said.

"Hopefully we will be able to make some genuine progress that is measurable and implementable that can make a difference to events in Syria,” the U.S. Secretary of State replied. "I look forward to a serious conversation.”

"I’m ready to work, I know you are, let’s go,” said Kerry with a smile, before the media were ushered out, and the two sides got to down to business, with Russia’s Foreign Minister Sergey Lavrov present by Putin’s side.

On Wednesday, the Washington Post published a leaked draft of the new Syrian plan Kerry is said to be offering to Putin, which includes "integrated operations” between the two countries, with a command center to be stationed in Amman, Jordan.

According to the text, the two countries will form a Joint Implementation Group (JIG) whose "purpose is to enable expanded coordination between the United States and the Russian Federation beyond the established safety of flight procedures.”

"The participants, through the JIG, are to work together to defeat Jabhat al Nusra and Daesh,” reads the text, referring to Al-Qaeda offshoot that has occupied large swaths of Syria, and Islamic State terror group.

"We have teed up ideas to the Russians,” said State Department spokesman Mark Toner, on the eve of the trip, explaining that Kerry was visiting Russia to "to try to resuscitate the cessation of hostilities,” following growing number of violations of February’s ceasefire, mediated by Moscow and Washington.

Russian Foreign Ministry spokesperson Maria Zakharova confirmed hours before Kerry’s arrival that Syria "will be the center of attention,” but refused to speculate about Russia’s openness to Washington plans.

"Let’s not discuss what we do not know yet. Let Kerry bring the plans first,” she told the media in Moscow.

The Kremlin has also refused to directly comment on any joint military plan, since it first filtered through to the media in a series of briefings and leaks a fortnight ago.

In what is Kerry’s fourth visit to Moscow in just over a year, the two sides will also discuss Ukraine, and the Nagorno-Karabakh tensions between Armenia and Azerbaijan.

"We are here to test again, in what is pretty close to the end stage, of whether this is going to work,” a senior State Department official, speaking not for attribution, told journalists flying in with Kerry to Moscow on July 14.

A partial Syria cease-fire negotiated by the United States and Russia in February broke down after about six weeks because of both flagrant regime violations as well as attacks by al-Qaeda’s Syria affiliate, Jabhat al-Nusra, the senior State Department official said.

"While not as prominent … in the breakdown of the cessation as the actions of the regime, … [Jabhat al-Nusra forces have] conducted offensives and they’ve led opposition groups into those offensives and that’s led to fighting back and forth,” the senior State Department official said.

"If we cannot get to a solution that resolves both of those problems [attacks by the regime and Jabhat al-Nusra], we’re going to be in a very different place, and the reality is that time is short here,” the U.S. official said.

"Let’s see what happens in Moscow in the next few hours. Let’s hope there is some type of general understanding or progress,” UN Syria envoy Staffan de Mistura told reportersin Geneva on July 14. "I think the next few days are crucial in order to make sure we know where they stand. When the two co-chairs agree on something … that helps a lot.”

A recent U.S. proposal, published by the Washington Post on July 13, calls for the United States and Russia to establish a Joint Implementation Group to be based near Amman, Jordan, "to work together to defeat Jabhat al-Nusra and Daesh [Islamic State] within the context of strengthening the Cessation of Hostilities and supporting the political transition process,” the document, titled "Terms of Reference for the Joint Implementation Group,” states.

However, the U.S. proposal for deeper U.S.-Russian coordination against Jabhat al-Nusra is controversial within the U.S. administration, with some Pentagon, intelligence and State Department officials expressing doubt the Russians could be trusted to restrain the Syrian regime or not to use the intelligence to target U.S.-backed rebels, given their track record of doing so in the past months.

"It’s pretty obvious that their agenda is not 100% aligned with our own,” U.S. Army Lt. Gen. Sean MacFarland, the commander of the U.S.-led coalition battling the Islamic State, told reporters in Baghdad on July 14, Reuters reported. "I’d be a little leery about giving too much information to the Russians, but I fully trust that our government officials understand this and know they’ll arrive at something that makes sense.”

White House officials acknowledge the misgivings but see no other viable approach to try to end the war.

"We will not commit indefinitely to diplomacy that does not achieve real results,” a U.S. administration official, speaking not for attribution, told Al-Monitor on July 13. "We cannot provide political cover for those seeking to pursue a different agenda.”

"Russia’s significant military intervention gives it enormous responsibility for Syria’s future,” the U.S. official said. "It’s long past time that Russia decides whether it is serious about advancing such shared objectives in Syria.”

Michael Kofman, a Russia military analyst at the Kennan Institute, said Russia understands it ultimately needs U.S. help to advance a negotiated settlement in Syria, but in the meantime it’s helping shape events on the ground in a way that strengthens Syrian President Bashar al-Assad, splinters the rebels, and might make a negotiated solution harder to reach.

"Russia is at an inflection point in this conflict,” Kofman told Al-Monitor in an interview July 13. "They had pretty good results [from the] use of force to achieve political ends, but now they are reaching diminishing returns.”

He said, "Their use of force is not nearly as decisive as before.” Approaching the one-year anniversary of the Russian intervention in Syria in September, "some of the Russian combat operations [commanders] are wondering, ‘What is the way forward here?’”

But Russia is still struggling to agree to the proposal Kerry came to discuss, even though they agree on many points, Kofman said.

"It is not easy for Russia to promise on behalf of Syria,” he said. "The second part of this is, there has been a clear objective for Russia, Syria and Iran for many months to cut off the rebel position in Aleppo and surround the city, and they are almost done. The pressure is too strong. … Russia is moving the ball incrementally, to the finish line, the encirclement of Aleppo. They almost got there.”

"Russia intends to shape the [situation on the ground] so when the next U.S. administration gets in, what they find is there are no groups in the conflict acceptable to the U.S. as an alternative to Assad,” he said.

Laura Rozen is Al-Monitor’s diplomatic correspondent based in Washington, DC. She has written for Yahoo! News, Politico and Foreign Policy. On Twitter: @LRozen