Exclusive: A New York Times columnist writes Americans are so "dumbed-down” that they don’t know that Russia "invaded” Ukraine two years ago, but that "invasion” was mostly in the minds of Times editors and other propagandists, says Robert Parry.

In a column mocking the political ignorance of the "dumbed-down” American people and lamenting the death of "objective fact,” New York Times columnist Timothy Egan shows why so many Americans have lost faith in the supposedly just-the-facts-ma’am mainstream media.

Egan states as flat fact, "If more than 16 percent of Americans could locate Ukraine on a map, it would have been a Really Big Deal when Trump said that Russia was not going to invade it — two years after they had, in fact, invaded it.”

But it is not a "fact” that Russia "invaded” Ukraine – and it’s especially not the case if you also don’t state as flat fact that the United States has invaded Syria, Libya and many other countries where the U.S. government has launched bombing raids or dispatched "special forces.”  Yet, the Times doesn’t describe those military operations as "invasions.”

Nor does the newspaper of record condemn the U.S. government for violating international law, although in every instance in which U.S. forces cross into another country’s sovereign territory without permission from that government or the United Nations Security Council, that is technically  an act of illegal aggression.

In other words, the Times applies a conscious double standard when reporting on the actions of the United States or one of its allies (note how Turkey’s recent invasion of Syria was just an "intervention”) as compared to how the Times deals with actions by U.S. adversaries, such as Russia.

The Times’ reporting on Ukraine has been particularly dishonest and hypocritical. The Times ignores the substantial evidence that the U.S. government encouraged and supported a violent coup that overthrew elected President Viktor Yanukovych on Feb. 22, 2014, including a pre-coup intercepted phone call between Assistant Secretary of State Victoria Nuland and U.S. Ambassador to Ukraine Geoffrey Pyatt discussing who should lead the new government and how to "midwife this thing.” 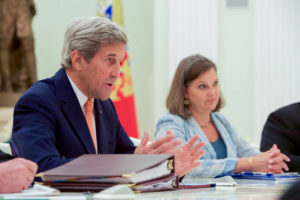 U.S. Secretary of State John Kerry, flanked by Assistant Secretary of State for European and Eurasian Affairs Victoria "Toria” Nuland, addresses Russian President Vladimir Putin in a meeting room at the Kremlin in Moscow, Russia, at the outset of a bilateral meeting on July 14, 2016. [State Department Photo]

The Times also played down the key role of neo-Nazis and extreme nationalists in killing police before the coup, seizing government building during the coup, and then spearheading the slaughter of ethnic Russian Ukrainians after the coup. If you wanted to detect the role of these SS-wannabes from the Times’ coverage, you’d have to scour the last few paragraphs of a few stories that dealt with other aspects of the Ukraine crisis.

While leaving out the context, the Times has repeatedly claimed that Russia "invaded” Crimea, although curiously without showing any photographs of an amphibious landing on Crimea’s coast or Russian tanks crashing across Ukraine’s border en route to Crimea or troops parachuting from the sky to seize strategic Crimean targets.

The reason such evidence of an "invasion” was lacking is that Russian troops were already stationed in Crimea as part of a basing agreement for the port of Sevastopol. So, it was a very curious "invasion” indeed, since the Russian troops were on scene before the "invasion” and their involvement after the coup was peaceful in protecting the Crimean population from the depredations of the new regime’s neo-Nazis. The presence of a small number of Russian troops also allowed the Crimeans to vote on whether to secede from Ukraine and rejoin Russia, which they did with a 96 percent majority.

Nazi symbols on helmets worn by members of Ukraine’s Azov battalion. (As filmed by a Norwegian film crew and shown on German TV)

In the eastern provinces, which represented Yanukovych’s political base and where many Ukrainians opposed the coup, you can fault, if you wish, the Russian decision to provide some military equipment and possibly some special forces so ethnic Russian and other anti-coup Ukrainians could defend themselves from the assaults by the neo-Nazi Azov brigade and from the tanks and artillery of the coup-controlled Ukrainian army.

But an honest newspaper and honest columnists would insist on including this context. They also would resist pejorative phrases such as "invasion” and "aggression” – unless, of course, they applied the same terminology objectively to actions by the U.S. government and its "allies.”

That sort of nuance and balance is not what you get from The New York Times and its "group thinking” writers, people like Timothy Egan. When it comes to reporting on Russia, it’s Cold War-style propaganda, day in and day out.

And this has not been a one-off problem. The unrelenting bias of the Times and, indeed, the rest of the mainstream U.S. news media on the Ukraine crisis represents a lack of professionalism that was also apparent in the pro-war coverage of the Iraq crisis in 2002-03 and other catastrophic U.S. foreign policy decisions.

A growing public recognition of that mainstream bias explains why so much of the American population has tuned out supposedly "objective” news (because it is anything but objective).

Indeed, those Americans who are more sophisticated about Russia and Ukraine than Timothy Egan know that they’re not getting the straight story from the Times and other MSM outlets. Those not-dumbed-down Americans can spot U.S. government propaganda when they see it.

[For more on this topic, see Consortiumnews.com’s "NYT Still Pretends No Coup in Ukraine”; "NYT Is Lost in its Ukraine Propaganda”; "NYT Whites Out Ukraine’s Brown Shirts”; and "NYT Enforces Ukraine ‘Group Think’”]