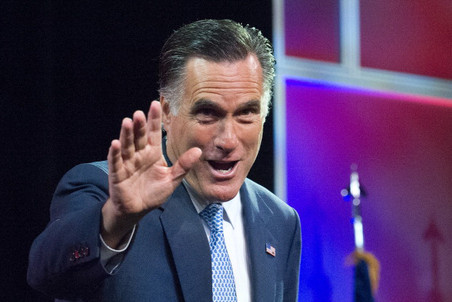 Republican presidential candidate Mitt Romney calls Russia the No. 1 foe of the United States and promises to stand up to Russian President Vladimir Putin. But if he's elected president, he might find that he'll need Moscow's help.

Russia plays a critical role in facilitating the withdrawal of U.S. troops from Afghanistan. The United States also needs Moscow's cooperation on keeping nuclear materials away from terrorists and American adversaries, and preventing gridlock at the U.N. Security Council, where both countries have vetoes.

While Romney has criticized President Barack Obama's "reset" — his administration's policy for improving relations with Russia — he has not said what exactly he would do differently beyond taking a tougher approach. Given U.S. interests in a cooperative relationship with Russia, some analysts think Romney may have to tone down his rhetoric if wins the White House.

"He may discover the value of Russia as a partner on some issues," says Andrew Kuchins, the head of the Russia program at the Center for Strategic and International Studies.

U.S.-Russian relations, like international affairs in general, have not been major issues in a presidential campaign dominated by the economy. But they are an area of sharp disagreement between the candidates and could be an issue in Monday's presidential debate, which will focus on foreign policy.

Obama administration officials see improved relations with Russia as a foreign policy success after years of tension during George W. Bush's presidency. They cite the opening of a supply corridor to Afghanistan, the signing of a major arms control treaty, known as New Start, and progress on trade issues, including Russia's entry into the World Trade Organization.

While Russia has often blocked Western initiatives in the U.N. Security Council, it has gone along in key instances. Last year, Moscow abstained in a vote allowing military intervention in Syria, though Russian officials later accused the U.S. and allies of abusing the council's mandate. In 2010, Russia also backed new sanctions against Iran after a compromise. However, it has opposed further sanctions aimed at curbing Iranian nuclear ambitions.

Recent heated disputes over Syria and Iran and missile defense show that the relationship remains testy and may be getting tense. In a sign of faltering ties, Russian officials said recently that they would not extend a 20-year-old program for U.S. help securing Russia's nuclear stockpile unless it was substantially overhauled. The Nunn-Lugar program is considered one of the hallmarks of post-Cold War cooperation.

Also, last month, Russia ordered U.S. foreign aid workers out of the country, charging that they were inciting unrest by supporting government opponents.

Romney advisers say Obama has conceded much to Russia and received little in return. They accuse Obama of being weak with Putin, whom they see as bent on undermining democracy at home and abroad and harming U.S. interests wherever he can. They cite Russian opposition to U.S. and European efforts to reign in Iran's nuclear ambitions and to bring down the Syrian government.

"On every major issue, we have received nothing but intransigence, obstruction, counterproductive behavior," says Romney foreign policy adviser Alex Wong.

Romney has criticized Obama's decision to scrap a Bush administration plan for a European missile defense system and replace it with one that was less threatening to Russia. He says this offended important allies like Poland and the Czech Republic, which were to host the original system, and won nothing from Moscow. Indeed, Moscow continues to oppose Obama's missile defense plans.

Romney also says the New Start treaty accomplished little because Russia's arsenal was already below treaty limits. The Obama administration says the agreement allowed a resumption of U.S. inspections of Russian weapons facilities that had ceased when a previous treaty expired.

If elected, Romney "will reset the reset," his campaign website says.

Obama's backers say Romney's comments are overblown and reflect his lack of foreign policy experience. For instance, they say, in naming Russia as the worst U.S. foe, Romney skipped over al-Qaida and Iran.

"The goal of the reset was to not let our disagreements with Russia prevent us from working together on our shared interests," says Spencer Boyer, a national security adviser to the Obama campaign. "That has been a success."

For all his tough talk, it's not clear what Romney would change, especially considering the potential consequences. A rupture in relations with Russia could prevent a smooth exit from Afghanistan. A supply corridor that runs through Russia and Central Asia is one of only two possible routes for the millions of tons of military equipment that the U.S. needs to bring home. The other one runs through Pakistan, which once closed it after a NATO airstrike killed Pakistani soldiers.

Romney's campaign website says he would review the New Start treaty. When asked what that means, Wong said that Romney will review everything when he gets into office.

It's not unusual for presidential candidates to talk tough about an adversary during a campaign only to become more pragmatic in office. In fact, Putin stoked anti-American sentiments in his presidential campaign. Yet one of his first moves was to approve a transit facility for NATO at a Russian airbase.

Still, Romney's blunt talk has been noticed in Moscow. Putin said in a TV interview last month that it justified his opposition to U.S. missile defense plans, which he says could undermine Russia's nuclear deterrent.

But he also said he could work with Romney.

"We'll work with whichever president is elected by the American people," Putin said. "But our effort will be only as efficient as our partners will want it to be."