Marathon talks end in agreement for a ceasefire between the Syrian government and opposition and for joint operations against Jabhat Al-Nusra. However, both sides underlined the absence of trust and the terms of the agreement are being kept secret. 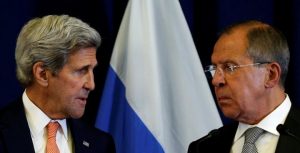 After hours of prolonged negotiations in Geneva, Sergey Lavrov and John Kerry have announced that they have come to some sort of agreement over Syria.

The details of the latest plan are, however, completely obscure and it is unwise to comment in detail until more details of what has been agreed are made known.

To complicate matters, though the Russians say the Syrians and Iranians have been kept informed about what has been agreed and are in agreement with it, the text of the agreement will be kept secret and will not be published.

So far as one can judge from the public comments, the plan calls for a ‘cessation of hostilities’ between the Syrian government and the Syrian opposition, the creation of ‘humanitarian access’ corridors for civilians to besieged cities, including government controlled cities under siege by the Syrian rebels but also including rebel controlled eastern Aleppo, the setting up of a joint command centre by the U.S. and Russia, and joint air strikes by the U.S. and Russia against ISIS and Jabhat Al-Nusra.

Should these air strikes ever take place they would be the first joint operation the Russian and U.S. militaries have undertaken together in their histories. Though the U.S. and the U.S.SR were allies in the Second World War, there was no occasion during that war when they conducted joint military operations with each other.

The devil in all this is in the detail, and since the detail is not being made public it is for the moment impossible to comment on this plan. Over the next couple of days, as the plan either is or is not put into effect, we should be in a position to learn or guess more about it. Until then anything said about this agreement is ultimately a guess.

Having given that important health warning, I would say the following.

Crucially, judging from Kerry’s and Lavrov’s public comments, it seems that the ‘cessation of hostilities’ that has just been agreed requires fighting to stop on the existing lines, which following the Syrian army’s advances over the last week are very different from what they were just a week ago.

That would imply that the Syrian army is not required to abandon the Castello road or the Ramousseh district in south west Aleppo, as the original U.S. ceasefire plan of a week ago appeared to require.

If so, then the latest agreement does not place Aleppo in the same sort of danger that the original U.S. ceasefire plan did. The next couple of days should show whether this is so or not.

The U.S., however, made that identical commitment in February and never honoured it, whilst Jabhat Al-Nusra, for its part, simply used the previous ‘cessation of hostilities’ agreement reached in February as cover to launch more offensives against the Syrian army. There is no explanation as to why what failed in February should succeed now.

Essentially, on a preliminary and strictly provisional view, the new agreement is simply a reworking of the previous agreement the U.S. and Russia agreed with each other in February, whilst taking into account the changes in the front lines that have taken place since then.

The February agreement failed to work, leading to more fighting, which resulted in the Syrian army gaining much more ground than it controlled in February, so that it is now in a much stronger position in Damascus and Aleppo than it was in February.

Presumably, there is something in the new agreement which the U.S. and the Russians think will make it succeed where the February agreement failed. A reasonable guess is that it is this, whatever it is, which is so embarrassing to one side or the other that the agreement cannot be made public.

At the risk of making a very big guess that may be completely wrong, if it is true as the Russians say that the Syrians and the Iranians have approved the agreement, then the major concession – whatever it is – which is being kept secret has most probably been made by the U.S.

The fact that it took the U.S. more than nine hours (not five hours as some reports say) to agree to the plan after Kerry referred it to Washington for approval also suggests that it is the U.S. which has made the major concessions, and that the terms of the agreement – whatever they are – ran into strong criticism and opposition in Washington from the hardliners.

Needless to say, whatever it is that Kerry and Lavrov have agreed with each other, it is far from certain that it will succeed. It notable that neither Kerry nor Lavrov seemed especially elated with what they had achieved. Both made clear their extreme caution about it. That does not make the future of this agreement look very promising.