Doug Bandow is a Senior Fellow at the Cato Institute and a former Special Assistant to President Ronald Reagan. He is the author of Foreign Follies: America’s New Global Empire.

There many reasons to oppose Hillary Clinton’s presidential run, including a history of scandal. Worse, she would lead America into more foolish wars.

Clinton’s beliefs, behavior, and promises all demonstrate that she embraces the militaristic status quo. In fact, her proclivity for promiscuous war-making has attracted the support of leading Neoconservatives, including some architects of the disastrous Iraq war. 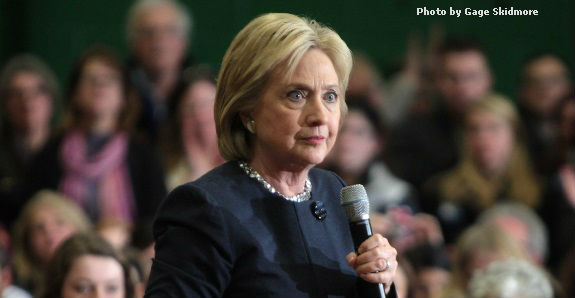 For instance, while First Lady she pushed for U.S. intervention in the Balkans—attacking the Bosnian Serbs and then Serbia. Alas, Bosnia remains badly divided while Kosovo has turned into a gangster state.

Sen. Hillary Clinton strongly backed the Iraq invasion. Only after it turned out badly and threatened to damage her political career did she acknowledge her mistake.

Clinton supported the Obama administration’s decision to double down, twice, on its expensive yet failed nation-building mission in Afghanistan. She was more responsible than anyone else for America’s Libyan misadventure, another attempt at regime change on the cheap, though with a humanitarian gloss. The war left another failed state, host to Islamic State killers and convulsed by civil war.

Her insistence on the ouster of Syria’s President Bashar al-Assad discouraged a negotiated settlement. Clinton advocated lethal aid to rebels, who displayed a dismaying tendency to surrender and turn weapons over to radical groups. She later urged direct U.S. military intervention in the form of a "no-fly” zone.

Clinton backed NATO expansion up to Russia’s borders, which poisoned bilateral relations. She further advocated including both Ukraine and Georgia, which would turn their next confrontation with Moscow into a potential nuclear war involving America. She also supported military aid to Ukraine.

Of her belligerent record Donald Trump observed: "Sometimes it seemed like there wasn’t a country in the Middle East that Hillary Clinton didn’t want to invade, intervene in, or topple.” Unfortunately, bombing, invading, and occupying other nations, supporting murderous foreign rulers, intervening in other countries’ conflicts, and killing foreign peoples all create enemies around the globe, some of whom retaliate against U.S. civilians.

As justification for her belligerence Clinton affirmed "America’s unique and unparalleled ability to be a force for peace and progress, a champion for freedom and opportunity.” Like intervening in Iraq and Libya, one wonders? Supporting Saudi Arabia in its brutal war in Yemen? Backing authoritarian dictatorships across Central Asia?

When the U.S. fails to lead, she argued, a power vacuum occurs. Actually, it is Washington’s insistence that it must do everything which discourages America’s allies from acting.

Contrary to Clinton’s assertion, America’s allies are not a "source of strength.” It’s as easy to collect foreign allies as Facebook friends. All the U.S. need do is offer to subsidize, protect, reassure, and coddle wealthy nations. But the Pentagon should not act as a welfare agency.

Clinton cited the "international coalition” against ISIS as a success. In fact, Washington’s intervention relieved the states directly at risk, which had more than a million men under arms, of the need to confront the so-called Islamic State. "Coalition” members are mostly following their own interests.

At least Clinton appears to recognize that war-mongering is a vote loser. So she recently proclaimed: "we must only send our troops into harm’s way as a last resort, not a first choice.”

Yet she never followed that principle in the past. After all, how could she seriously argue that "we absolutely must” intervene in the Balkans, Iraq, Libya, and Syria and against the Islamic State?

She promised not to send ground forces to fight the Islamic State, but then almost immediately started dissembling. Now she says she only doesn’t want to place "big contingents” in either Iraq or Syria.

Moreover, Clinton denounced budget caps and sequester as applied to the military. They aren’t a particularly smart way to make defense policy, but they have slowed military outlays, which more than doubled in real terms after George W. Bush took office.

Clinton also cites "the experience and the temperament” of the prospective military commander-in-chief as an issue. Clinton seems less volatile than Trump, but is neither more truthful nor of better character.

Her eagerness to go to war is an even greater flaw. What makes Clinton dangerous is not the sort of incoherence reflected in Donald Trump’s foreign policy approach but a coherent yet far more dangerous advocacy of military dominance around the globe. If one wants more conflict and war, the obvious choice is Hillary Clinton.