Opinion Editor of The Washington Times

I've been involved in politics for more than half a century and have rarely supported or voted for a candidate with whom I found myself in agreement with 100% of the time. As I decide to back a primary or general election candidate, I ask myself the same question: who among those running and who has a chance of being elected is most likely to advance the conservative agenda? It's a real world question and one anyone seeking to influence the direction of the country should ask before making their choice. 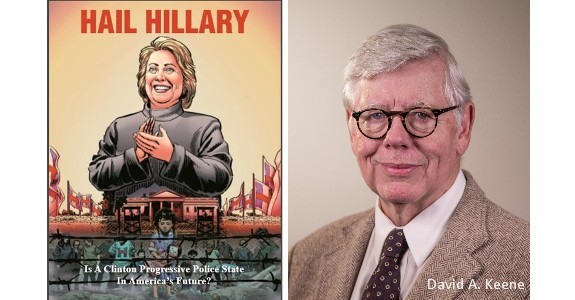 This year's election may well be the most important of our lifetimes. The effort of President Obama and his party to "fundamentally change” this country is well underway and if his successor continues us on the path he has us on, the nation we inherited from those who came before will be changed in ways that would shock the founders. If we are to pass the nation and the values on which it was founded on to our children and grandchildren we must prevent that from happening.

Donald Trump was not my first choice as the year began, but he won the Republican nomination and any hope we have of turning things around depend on supporting him this fall. I don't agree with his every position, but he is all that stands between us and a future in which our fundamental rights and freedoms will be in constant jeopardy. It's really just that simple. The next President will appoint several Supreme Court Justices and untold numbers of District and Circuit Court judges. If Hillary Clinton is President, we know just what kinds of men and women she will appoint to these positions.

I am of course concerned about what this would mean for the Second Amendment, but I am just as concerned about the First Amendment guarantees of free speech and religion and the Fourth Amendment guarantees of Due process. Her appointees will have the power and inclination to rewrite the fundamental rules that have made it possible for generations of Americans to create the freest, most prosperous nation in the history of the world.

Donald Trump's election will prevent this and that alone is reason enough to support him. He is firmly committed to appointing men and women who will defend rather than rewrite the Constitution; who will be guided by the principles of the founders rather than the whims of today's liberals. When I talk to conservatives who don't particularly like Donald Trump because they don't trust him, fear that he might ignore Congress or pursue policies we don't like, I remind them that while they may not be sure of what he will do if elected, they can be absolutely certain of what Mrs. Clinton will do if she prevails. We can certainly trust her to do everything she can to continue her predecessor's policies, to rewrite the Constitution and to pursue a foreign policy devoid of principle.

Staying home in November, voting for a third party candidate with no chance of winning or even voting for Mrs. Clinton as some unthinking conservatives hostile to Mr. Trump seem prepared to do are not rational options for one who cares about the future. Donald Trump can win in November, but he won't win if those of us who care about the freedoms and values that we say are so important to us don't do our part to help him win.

The consequences of undermining his candidacy at this point are not difficult to predict and won't be pretty. If conservatives desert at this juncture, Mrs. Clinton will end up with a Democratic Senate and if that happens she will get just about everything she wants. Her Supreme Court appointees will eventually be confirmed, treaties that are awaiting ratification will be ratified, the power of an already too powerful executive will increase and many of the freedoms we have always taken for granted will be in danger of becoming mere memories.

I don't personally know how any thinking conservative will be able to look in the mirror if the future Mrs. Clinton and her party envision for us becomes a reality because he or she deserted our forces and then allowed the free nation we love to slip away.