Russophobic rants by some European Union leaders and their willful distortion of events in Syria is a reflection of why the 28-member bloc is careering toward disaster. We are witnessing a crisis of appallingly inept leadership. Trends Russian anti-terror op in Syria, Syria unrest 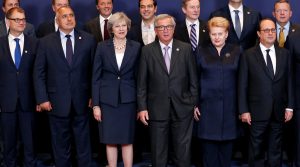 Russophobic rants by some European Union leaders and their willful distortion of events in Syria is a reflection of why the 28-member bloc is careering toward disaster. We are witnessing a crisis of appallingly inept leadership. Trends Russian anti-terror op in Syria, Syria unrest

German, British and French leaders were among the most hawkish voices at the EU leaders’ summit in Brussels this week, denouncing what they claimed were Russian "war crimes” in Syria and calling for additional economic sanctions on both Moscow and Damascus.

French President Francois Hollande echoed their calls for the EU to slap more sanctions on Russia – in addition to those the bloc has implemented over the Ukraine conflict.

This came only days after Belgian F-16 fighter jets reportedly killed six civilians in the Aleppo countryside, adding to a catalog of illegal aggression committed in Syria by French, British and American warplanes bombing the country without any legal mandate.

In the end, good sense among certain member states prevailed, and the EU summit concluded without imposing additional punitive measures. As the Financial Times reported: "Italy’s Renzi forces a retreat from new sanctions on Russia… Germany, France and UK rein in demand for fresh EU sanctions over Aleppo bombardment.” Italy, Spain, Austria, Hungary, Greece, Malta and Cyprus were some of the EU members wary of escalating economic and political problems already incurred from loss of trade with Russia over the Ukraine debacle.

Britain’s premier May gave a particularly asinine speech in Brussels. She called for a "robust and united European stance in the face of Russian aggression.” This from the leader of a government currently embroiled in bitter rows over its divorce from the EU. So, the British leader wants to bequeath even more tension and economic hardship between the people of Europe and Russia, just before she packs up Britain’s membership.

In the Russophobic rousing, European Council President Donald Tusk also excelled. Despite the EU summit rejecting the adoption of more sanctions against Russia over Syria, Tusk was later threatening that such measures remained an option. Tusk had regaled the summit with a list of alleged Russian "misdemeanors” including "air-space violations, disinformation campaigns, cyber-attacks, interference in the EU’s political processes and beyond. Hybrid tools in the Balkans, to developments in the MH17 investigation.”

Then he declared: "Given these examples, it is clear that Russia’s strategy is to weaken the EU.”

Please note that Tusk is supposed to be a leading light for the EU as it negotiates a raft of existential problems, from intractable international trade deals, migration and border disputes, anti-EU political parties, and ongoing economic stagnation for 500 million citizens.

But if Tusk and other EU leaders like Merkel and Hollande can come out with such inane views on Russia, what chance has the bloc got in dealing effectively with other challenging issues? No wonder, EU citizens are losing respect and faith in political leaders when they are seen to be so utterly incompetent and detached from reality. Yet to make matters even worse, Tusk and his Russophobic ilk turn around and blame the imploding EU crisis on alleged Russian plots to "weaken and divide.”

Just ahead of the EU leaders’ summit in Brussels, Merkel and Hollande met Russian President Vladimir Putin in Berlin for a conference on the Ukraine crisis. The Kiev regime’s President Petro Poroshenko was also in attendance.

The Berlin meeting did not result in any progress toward resolving the Ukraine dispute. While the German and French leaders wanted to penalize Russia over alleged violations in Syria, they seemed oblivious to hundreds of attacks by Kiev’s armed forces on civilian centers in breakaway eastern Ukraine. The assassination of a military commander in the self-declared Donetsk People’s Republic last week by suspected Kiev agents has heightened fears of a return to all-out war.

Where are Merkel and Hollande’s condemnations and calls for sanctions on the Kiev authorities whom they patronize with billions of dollars in financial aid and NATO military support?

Also, Merkel, Hollande and Britain’s May have little to say about recorded "cruel, inhumane, sickening” massacres in Yemen committed by the Saudi coalition bombing that country. Their silence no doubt is owing to the fact that their governments sell billions of dollars worth of weapons to the Saudi regime even as it slaughters women and children in Yemen.

And, indeed, let’s talk about Syria and the besieged northern city of Aleppo. The crimes that European leaders allege against Russia and its Syrian ally are based on unverified claims issued by dubious networks evidently under the control of the anti-government militants. The militants besieging east Aleppo are dominated by head-chopping terrorist groups like the internationally proscribed Jabhat Al-Nusra. When Russia unilaterally implemented a temporary ceasefire this week in Aleppo, an innovative live-streaming broadcast from the appointed humanitarian corridors proved once again the real nature of the violence.

Civilians trapped in the militant-held areas were shown to be held as "human shields” by the insurgents. While buses and other vehicles were waiting to ferry civilians out of the conflict zone, video footage recorded militants shelling and sniping at the humanitarian aid effort.

Those violations corroborated what citizens in east Aleppo have been saying for a long time – that they are being held against their will by the gunmen. Besieged people are even calling on the Syrian and Russian forces to continue in their operations to break the hostage situation and liberate that part of the city.

All across Syria, hundreds of villages and towns have been liberated by the Syrian army and its Russian allies since Putin ordered his air force to intervene in the stricken country at the end of last year.

One of the recent successes was the town of Qudsaya near the capital Damascus. Last week, thousands of residents rallied in the main square cheering President Bashar Assad, the Syrian army and Russia for their "liberation” after the foreign-backed mercenaries were routed from the town.

The foreign backers of the mercenary army that has plunged Syria into horror since March 2011 – with perhaps half a million dead – include the supposedly leading EU members Britain and France. Hollande is on record for admitting that France supplied weapons to insurgents in Syria as far back as 2012, when the siege of Aleppo began, and in breach of a European arms embargo.

What is going on in Syria is a military victory over a foreign-sponsored terrorist war on that country. Russia’s role in the liberation of Syria is principled and commendable. Those who should be facing prosecution for war crimes include pious, pompous government leaders, past and present, in London and Paris.

If such prominent EU governments can be so wrong and distorting about something so glaringly obvious as Syria and Russia’s support, then no wonder the EU is in free-fall over so many other pressing matters. With criminally incompetent politicians in power, the EU is a bus with its driver slumped at the wheel.

Originally from Belfast, Ireland, Finian Cunningham (born 1963) is a prominent expert in international affairs. The author and media commentator was expelled from Bahrain in June 2011 for his critical journalism in which he highlighted human rights violations by the Western-backed regime. He is a Master’s graduate in Agricultural Chemistry and worked as a scientific editor for the Royal Society of Chemistry, Cambridge, England, before pursuing a career in journalism. He is also a musician and songwriter. For many years, he worked as an editor and writer in the mainstream news media, including The Mirror, Irish Times and Independent. He is now based in East Africa where he is writing a book on Bahrain and the Arab Spring.He co-hosts a weekly current affairs programme, Sunday at 3pm GMT on Bandung Radio. Finian Cunningham is a frequent contributor to international media, including PRESS TV and nsnbc, where he began contributing in 2012.